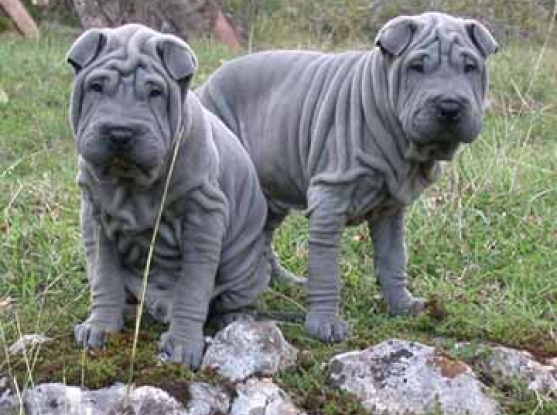 The Shar-Pei dog, selectively bred for its characteristic thick and wrinkled skin, is predisposed to a periodic inflammatory disease called Familial Shar-Pei fever (FSF). Today, a team of researchers at Uppsala University in Sweden and the Broad Institute of MIT and Harvard published a paper explaining for the first time how these two unique traits are linked: the presence of a duplicated regulatory region upstream from the Hyaluronic Acid Synthase 2 (HAS2) gene. Details appear in the March 17 issue of PLoS Genetics.

HAS2 is one of several enzymes in the body involved in the synthesis and degradation of hyaluronan (HA),one of the main components of the Shar-Pei's breed-defining skin. These dogs have two- to five-fold higher blood levels of HA than other dog breeds. Researchers believe that HA can provoke inflammation.

To locate the genetic cause for wrinkled skin, the researchers first compared the genomes of Shar-Pei dogs to those of other dog breeds. To locate the mutation site for FSF, they compared the genomes of healthy and sick Shar-Pei. The paper reports that it is not the HAS2 itself that is faulty. Instead, they identified a small segment of the dogs' genome located near HAS2 gene that is linked with both wrinkled skin and periodic fever in the Shar-Pei.

"It is a regulatory mutation where selection for the desired feature, wrinkled skin, has increased the number of copies of the mutation so that a larger amount of HAS2 is made,” explains Kerstin Lindblad-Toh, professor in comparative genomics at Uppsala University and the scientific director of Vertebrate Genome Biology at the Broad Institute of MIT and Harvard. More copies of the mutation also predispose the dogs to develop FSF. This is the first time researchers have shown a link between HAS2 and an inflammatory disease like FSF autoinflammatory disease. Says Lindblad-Toh,“Our findings suggest that this regulatory element is not just a marker for FSF but is directly related to causing the illness.”

Lindblad-Toh and colleagues in Sweden and at the Broad study domesticated dog breeds as a means of finding diseases underlying human disease. “The Shar-Pei dog is a great model for human periodic fever syndromes,” she says. Currently, finding regulatory mutations in human disease is difficult. “In humans, we are still focusing on the protein-coding genes themselves, where the mutations are more easily understood,” she explains. But finding these types of mutations is easier in the purebred dog since regulatory mutations are common.

This paper implicates a new trigger for inflammatory disorders and periodic fevers, and shows the importance of regulatory mutations for disease. The scientists are currently working on developing a genetic test that, when validated, can help breeders make informed choices to minimize the incidence of periodic fever. It also opens the possibility of studying a wider range of HA-associated mechanisms in human medicine.

Broad news story: In divergence from wolves, doggie diet made a difference (2012)