How a patient partnership is propelling cancer research 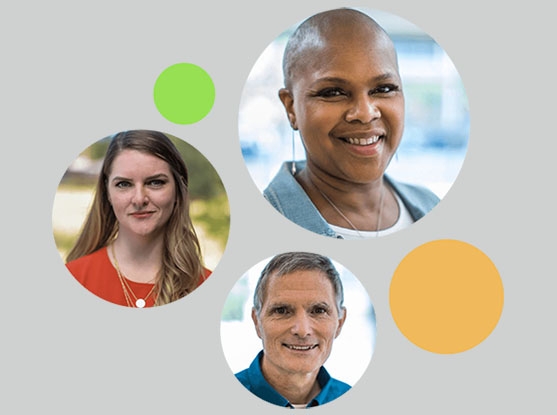 Credit : Nomad Editing Co.
Patient participants in Count Me In
By Leah Eisenstadt

Count Me In works directly with cancer patients to generate and share data that are now fueling new discoveries by researchers at the Broad Institute and beyond.

In the fall of 2018, cancer researcher Corrie Painter began presenting some intriguing early results from a new study on a rare and deadly cancer known as angiosarcoma. She and her fellow scientists hoped that by sharing their findings publicly before publishing them in a scientific journal, they could help other researchers more quickly make discoveries that might help patients.

They were right. Their results were just what Seattle-based oncologist Michael Wagner and his colleagues had been looking for. Wagner, an associate professor at the University of Washington School of Medicine, helps lead a clinical trial aimed at evaluating new treatments for rare cancers, and he had been trying to build a case for including patients with angiosarcoma in the trial. The findings from Painter’s study bolstered his team’s rationale for doing so, and they soon secured approval to enroll patients with the rare cancer in the trial.

“It’s exceptionally hard to find datasets like this on rare cancers,” said Wagner. “Getting the data out early was critical in supporting the addition of this cohort onto that trial.”

Accelerating biomedical advances that could one day lead to new treatments is one of the key goals of Count Me In, a research initiative that Painter helped build. Count Me In (CMI) is a partnership between the Broad Institute of MIT and Harvard, the Dana-Farber Cancer Institute, and the Emerson Collective. It enables cancer patients across the U.S. and Canada to share their medical information, DNA samples, and their voices with cancer researchers. The CMI team engages directly with patients through their website, social media, and advocacy groups and utilizes state-of-the-art genetic analysis techniques to study angiosarcoma and other kinds of cancer, forging a unique intersection between patient advocacy and genomics research.

Project scientists analyze the patients’ DNA and medical records, generating anonymized datasets and quickly releasing them to the scientific community. “The project represents a transformative movement that allows data to stream into labs,” said Painter, who previously served as deputy director of Count Me In and is now a strategic advisor for the program.

Since the effort’s launch in 2015, thousands of individuals living with cancer have joined, including those who haven’t been able to participate in research studies because they don’t live near major medical centers. The team has been contacted by more than 60 research groups and labs from more than 10 countries who want to learn more about the datasets and incorporate them into their own research. Count Me In data have led to more than 50 scientific publications on a range of cancer types. Those studies have revealed, for example, mutations that allow tumors to resist certain drugs and mutations more likely to be found in tumors that have spread versus those that haven’t. Other studies shed light on cancers that haven’t been well studied, such as the 2018 study on angiosarcoma, which pointed to new ways to improve the treatment of some angiosarcoma patients. By collecting and generating a variety of data types, Count Me In provides researchers with datasets that they might not be able to generate or access otherwise. 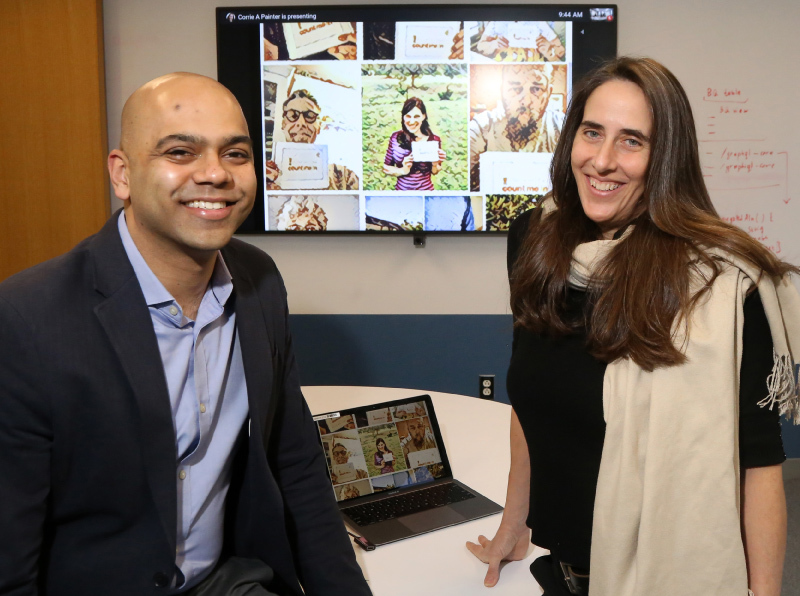 “Patient participants join Count Me In in the hope that their contributions will one day help other patients, and we’re starting to make good on that promise,” said Count Me In Director Nikhil Wagle, an institute member at the Broad, a medical oncologist at Dana-Farber, and an associate professor at Harvard Medical School.

Seven years after starting CMI, Wagle still vividly remembers one of his patients who helped inspire the idea for the project. He had treated a 38-year-old man with metastatic melanoma, who initially got better, but then relapsed and unfortunately passed away. In the patient’s final days, he generously agreed to donate a tumor sample in hopes that scientists could study it and learn why his cancer became resistant to treatment. After analyzing the sample, Wagle and his colleagues noticed a new mutation that had arisen in the tumor and might be targeted with different treatments to avoid relapse in other patients like him.

“We thought, if we can learn so much from a single patient, what if we could do this at scale and allow even more patients to participate in research more easily,” said Wagle.

They soon launched an initiative, later named Count Me In, aimed at generating a massive publicly available database of clinical, genomic, molecular, and patient-reported data in cancer. The team began with the Metastatic Breast Cancer (MBC) Project, which has partnered with more than 6,000 patients. In 2017, the researchers released the first results from the MBC Project, and have since regularly shared new datasets as more patients joined the project and more analyses were completed. They post results to CBioPortal, a cancer genomics data repository, and to the project website. They also present at scientific and medical conferences, hoping to connect with researchers who can utilize the data in their own work.

“We aim to shorten the time to discovery” by doing the legwork of identifying participants, generating sequencing data, and collecting clinical records, Wagle said. “Instead of building datasets from scratch, groups can start with an existing body of knowledge and use it to build their research projects, which will hopefully save time and resources in getting to those final answers.”

One team of scientists in Texas recently used MBC data to understand how a common type of breast cancer becomes drug-resistant. About 20 percent of patients with estrogen receptor (ER)-positive breast cancer will relapse with metastatic disease after receiving a widely used treatment called endocrine therapy. Carlos Arteaga at the University of Texas Southwestern Medical Center and his group used data from the MBC Project to show that ER-positive tumors with too many copies of a gene known as PRR11 are more likely to become resistant to endocrine therapy.

“It would have been extremely difficult for us to establish our own genomic dataset using patient-supplied samples, especially for these metastatic tumors,” said Kyung-Min Lee, first author of the Arteaga lab’s study who is now an assistant professor at Hanyang University in South Korea. “The datasets from Count Me In helped us identify a novel mechanism of endocrine therapy resistance, which pointed to strategies that could improve survival for ER-positive breast cancer patients.”

FROM COMMON TO RARE

After the successful launch of the MBC Project, the Count Me In team wondered if the same model could help make advances in less common cancers. In 2017 they began a study of angiosarcoma, a deadly soft tissue cancer that is exceedingly rare – only 300 new cases are diagnosed each year in the US. Through the Angiosarcoma Project, they were able to connect with more than 300 individuals with the rare cancer or their family members, and obtained medical records and tumor samples from some of them to analyze.

“The very existence of this dataset is what makes it unique,” said Painter, a scientist who became a patient advocate after her own angiosarcoma diagnosis in 2010. “It’s a call to action for catalyzing rare cancer research. There’s never going to be enough money, enough interest, or enough patients at any one institution to do a thorough study of a rare cancer, so patient-partnered research stands to make great strides.”

After analyzing DNA in the patients’ tumors, the researchers learned that participants with angiosarcoma of the head, neck, face, and scalp tended to have a much higher number of DNA changes than other subtypes did. Recent findings by other researchers indicated that these kinds of tumors might respond well to a treatment known as immune checkpoint blockade. In fact, Painter and her colleagues found two participants in their study with this type of angiosarcoma who, after failing to respond to standard treatments, had been given off-label immune checkpoint inhibitors and responded exceptionally well to the therapy.

Painter and the team presented the findings publicly before publishing them in a journal, and the angiosarcoma research community took notice.

“The angiosarcoma dataset is incredible,” said oncologist Razelle Kurzrock, associate director of clinical research at the Medical College of Wisconsin Cancer Center. “There’s no way that various investigators can accumulate data like this on their own.”

Kurzrock collaborated with Wagner, the University of Washington oncologist, and others to perform their own analysis of the Angiosarcoma Project’s data, which further supported the idea that immune checkpoint blockade might help some patients. The results helped them include angiosarcoma patients into an ongoing clinical trial. “We could only make rapid progress from the lab to the clinic in an unmet need — a lethal ultra-rare disease such as angiosarcoma — because of the availability of such datasets,” Kurzrock said.

In their trial, Kurzrock and Wagner observed that some patients with angiosarcoma of the face or scalp responded remarkably well to the immunotherapy treatment, validating the Angiosarcoma Project results. They are now planning to test whether this treatment could help some patients earlier on in their disease, before it spreads.

“Count Me In was the first effort to highlight a rare cancer in which it’s now clear that this treatment could be beneficial for some,” said Wagner, who is also at the Fred Hutchinson Cancer Research Center. “Without CMI, the advance would have been delayed, if it would have happened at all.”

While CMI is enabling discoveries by researchers around the globe, project scientists are generating their own insights using Count Me In data. Scientists with the Metastatic Prostate Cancer Project recently published an analysis of data from more than 700 participants with the illness, including many from rural or medically underserved areas. Because of the project’s direct partnership with patients, the researchers were able to collect more data points from them during the study and observe how their tumors changed over time and after treatments. The scientists were surprised by the number of patients who were willing to send them multiple blood samples for the study. This allowed the researchers to track genetic changes in the same patients and see how prostate cancer evolves as it grows and spreads — insight that could help scientists figure out how to stop or slow that growth.

“In metastatic prostate cancer, we don't often get biopsies in patients who have advanced disease” in part because the disease often spreads to inaccessible areas of the bone, said Broad associate member Eli Van Allen, an associate professor at Dana-Farber Cancer Institute and Harvard Medical School. “Using this direct-to-patient mechanism, we could send kits to patients where they're at to get blood samples for analysis, which made this study possible.”

With these and other early signs that their work is starting to pay off, the Count Me In team has been expanding their efforts. They have added projects focused on esophageal and stomach cancer, osteosarcoma, primary brain tumors, colorectal cancer, and a rare cancer called leiomyosarcoma, and have released many datasets to the cancer research community. And in 2021, project leaders opened their platform to patients in the US or Canada who have been diagnosed with any kind of cancer, so that researchers can learn from any patients who want to be included.

The dozens of scientific publications and ongoing studies using CMI data illustrate how the CMI model is impacting cancer research, both in the lab and in the clinic. “Ultimately, what we’re trying to do is change lives, and we’re starting to see examples of how that’s happening,” said Painter.

Count Me In launches Osteosarcoma Project