Highlights from the American Society of Human Genetics 2016 conference 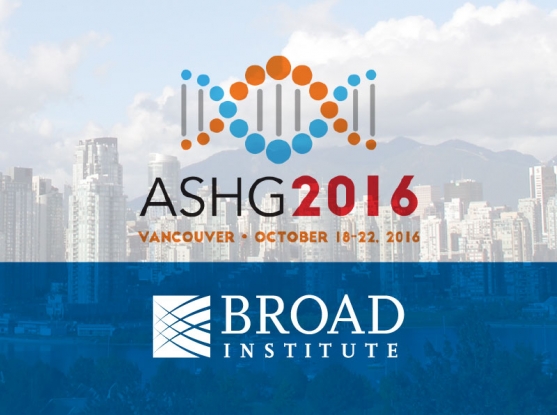 Daniel MacArthur, co-director of the Program in Medical and Population Genetics at the Broad Institute, unveiled the Genome Aggregation Database (gnomAD)—an expansion of the Exome Aggregation Consortium (ExAC) public resource. GnomAD roughly doubles the number of exomes contained in ExAC and incorporates genome sequencing data for comparative analyses. The database currently spans 126,216 exomes and 15,136 whole-genome sequences (and provides a new challenge for anyone looking to write about the initiative, as MacArthur Tweeted during the conference).

Associate Broad member and Brigham and Women’s Hospital (BWH) geneticist Robert Green presented preliminary results of the BabySeq program, a pilot study currently underway at BWH and Boston Children's Hospital (BCH) exploring the impacts of newborn genomic sequencing. The program, led by researchers from both hospitals including Broad Institute member Heidi Rehm, is on track to reach overall enrollment goals; about 7 percent of families approached so far have agreed to participate, and sequencing results have been returned for 51 infants. The research team has reported monogenic disease risk variants back to the parents, as well as one case of a maternally inherited BRCA2 variant. The project continues to enroll infants from the BWH Well Baby Nursery as well as the neonatal ICUs at both BWH and BCH.

The ASHG named James Gusella, an associate member of the Broad and neurogeneticist at Harvard Medical School and Massachusetts General Hospital, the 2016 recipient of its William Allan Award. The award is presented annually with an engraved medal and a $25,000 prize in recognition of “substantial and far-reaching scientific contributions to human genetics.” Gusella, widely credited with mapping the Huntington disease (HD) gene to its chromosome, has led efforts with colleagues to identify and analyze the HD gene as well as others associated with conditions such as Alzheimer disease and amyotrophic lateral sclerosis (ALS).

Nikolaos Patsopoulos, associate member of the Broad and assistant professor of neurology at BWH, gave a plenary session discussing results from the International Multiple Sclerosis Genetics Consortium’s analysis of genome-wide association studies. The analysis, the largest of its kind, covered 47,351 multiple sclerosis subjects and 68,284 controls, and identified 200 genetic variants associated with MS. Most of the impacted genes affect immune cells, with a small number potentially specific to brain-related functions.

Associate Broad member Kasper Lage, an assistant professor at Harvard Medical School and Director of Bioinformatics of the Massachusetts General Hospital Department of Surgery, co-moderated and presented at an invited session that discussed statistical frameworks, web platforms, and algorithms being developed to interpret genomic datasets. Lage, also a member of the the Broad Institute’s Stanley Center for Psychiatric Research, kicked off the midday session with a talk on constructing cell-type-specific protein interaction networks to interpret genetics related to psychiatric diseases. The audience filled both the main and overflow rooms, with standing room only.

Broad Institute–affiliated scientists gave numerous other talks and had their names on over 100 conference posters covering the latest research this year. A full list of abstracts is available from the ASHG.