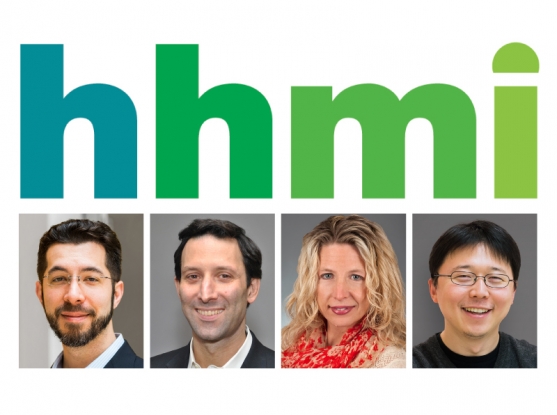 Four faculty members of the Broad Institute of MIT and Harvard are among 19 top biomedical researchers nationwide who will become Howard Hughes Medical Institute (HHMI) investigators this fall. Ed Boyden, Benjamin Ebert, Beth Stevens, and Feng Zhang will receive long-term, flexible funding from HHMI, providing them the freedom to move their research forward in creative and new directions.

“I am delighted that HHMI is recognizing the remarkable efforts of Ben, Beth, Ed, and Feng,” said Broad Institute Director and President Eric Lander. “This honor will allow them to continue to make pioneering advances in their research. With HHMI’s support, they can pursue truly transformative scientific work to improve human health!”

Boyden is an associate member of the Broad Institute, Y. Eva Tan Professor in Neurotechnology at MIT, and an associate professor of biological engineering and brain and cognitive sciences at MIT's Media Lab and McGovern Institute for Brain Research. He leads the synthetic neurobiology group at MIT, which develops and applies tools for analyzing and repairing complex biological systems such as the brain. These technologies include optogenetics, which enable the activation and silencing of neural activity with light, and which Boyden first developed at Stanford University with Zhang and Karl Deisseroth.

Ebert is an institute member of the Broad Institute, the Nicola David-Pinedo Professor of Medicine at Harvard Medical School, and the chair of medical oncology at the Dana-Farber Cancer Institute. The Ebert laboratory focuses on the molecular basis and treatment of hematologic malignancies, with a particular focus on myelodysplastic syndromes. Ebert is currently an HHMI faculty scholar.

Stevens is an institute member of the Broad Institute, an associate professor at Harvard Medical School, and a research associate in neurobiology at Boston Children’s Hospital. Her research seeks to understand the mechanisms that regulate the disappearance of synapses — junctions where nerves communicate with each other — by focusing on how immune-related molecules mediate this process.

Zhang is a core institute member of the Broad Institute of MIT and Harvard, as well as an investigator at the McGovern Institute for Brain Research at MIT, the James and Patricia Poitras Professor of Neuroscience at MIT, and an associate professor at MIT, with joint appointments in the departments of Brain and Cognitive Sciences and Biological Engineering. Zhang is currently an HHMI-Simons Faculty Scholar. He is a leader in developing genome editing technologies, including CRISPR. His research focuses on developing technologies to study the role of genetic and epigenetic mechanisms underlying brain function and disease.

The new HHMI investigators were selected from a pool of 675 tenured or tenure-track faculty at eligible U.S. institutions with three to 12 years of professional experience. HHMI will provide each investigator with support for basic biomedical research during the next seven years, at which time appointments may be renewed. HHMI recently increased the standard term for HHMI investigators from five to seven years, offering longer-term support for exploring new scientific territory.

“We selected these scientists because they know how to ask hard and interesting questions with skill and intellectual courage,” says David Clapham, HHMI’s vice president and chief scientific officer. “We believe they have the potential to make breakthroughs over time.”

By making awards according to the principle of “people, not projects,” HHMI gives investigators the freedom to explore, to change direction if necessary, and to follow their ideas through to fruition over the course of many years.

Read more about Boyden, Ebert, Stevens, and Zhang and the other new investigators at the HHMI Web site.