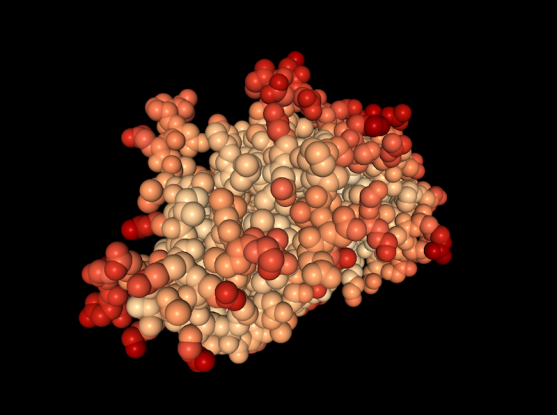 Crystal structure of a portion of the HER2 protein. (Credit: RCSB PDB)
By Richard Saltus, DFCI Communications

Biopsies taken before and after treatment reveal new resistance route, as well as an opportunity to resensitize metastatic breast cancers to therapy.

Metastatic breast cancers treated with hormone therapy can become treatment-resistant when they acquire mutations in the human epidermal growth factor receptor 2 (HER2) that were not present in the original tumor, reports a team led by scientists from Dana-Farber Cancer Institute and the Broad Institute.

“It was surprising to discover that HER2 mutations can be acquired in the metastatic setting, suggesting that these tumors evolve,” said Nikhil Wagle, senior author of the paper in Nature Genetics. “These HER2 mutations seem to be a mechanism of resistance to therapies that target the estrogen receptor, which explains the context in which they are acquired.” Wagle is deputy director of the Center for Cancer Precision Medicine at Dana-Farber and an associate member with the Broad Institute's Cancer Program.

The researchers demonstrated in cell lines, and in one patient example, that this form of resistance could be reversed by a combination of the hormone therapy fulvestrant and the HER2 kinase inhibitor neratinib. “The discovery of the acquired HER2 mutation in one patient’s metastatic biopsy prompted enrollment into a phase 2 trial of fulvestrant plus neratinib, resulting in a partial response lasting six months,” said Utthara Nayar, co-lead author of the report and a research fellow at Dana-Farber.

The study was part of a project aimed at identifying mechanisms that enable ER-positive breast cancers to become resistant to commonly used therapies. About 70 percent of breast cancers express the estrogen receptor, and patients are routinely treated with drugs like tamoxifen or aromatase inhibitors that block estrogen stimulation of the cancer cells. However, these drugs almost always stop working in metastatic ER-positive breast cancers due to the development of drug resistance. In 25 to 30 percent of such patients, this resistance is caused by mutations in the estrogen receptor.  Nayar and Ofir Cohen, co-lead author of the paper, postdoctoral research and computational biologist at the Broad Institute and Dana-Farber, carried out the study to look for other mechanisms of resistance.

They began by applying whole-exome sequencing to tumor biopsies from 168 patients from the Susan F. Smith Center for Women’s Cancers at Dana-Farber with ER-positive metastatic breast cancer that was resistant to hormonal therapies. Activating mutations in HER2 were identified in biopsies of eight patients who had developed resistance to aromatase inhibitors, tamoxifen, or fulvestrant. The scientists then looked back at biopsies taken from five tumors before the patients began treatment and found no evidence of pre-existing HER2 mutations in four of the five patients, “suggesting that these mutations were acquired under the selective pressure of ER-directed therapy.” In other words, the development of mutations in HER2 enabled some cancer cells to survive despite receiving therapies that target the estrogen receptor, and those cells with HER2 mutations formed clones that were resistant to hormonal therapies.

These results show that, while mutations in the estrogen receptor itself are a common cause of resistance to hormonal therapy in metastatic ER-positive breast cancer, mutations in other genes and proteins can drive treatment resistance.

The scientists tested a strategy aimed at blocking the effects of the HER2 mutation so that the metastatic breast cancer cells would become sensitive to estrogen deprivation again. In laboratory cell lines, they treated the cancer cells with neratinib, an irreversible inhibitor of HER2, and fulvestrant, and found that this combination overcame the drug resistance that had developed in the metastatic cancer.

“Taken together, our results suggest that activating HER2 alterations are a distinct mechanism of acquired resistance to multiple forms of ER-directed therapy in metastatic cancer that can be overcome by an irreversible HER2 inhibitor,” the authors said. They added that these finding highlight the importance of profiling metastatic tumor biopsies to identified resistance mutations in real time to aid treatment decisions.

Support for this work was provided by the Department of Defense, the National Cancer Institute, the American Association for Cancer Research, the Klarman Family Foundation, and other sources.