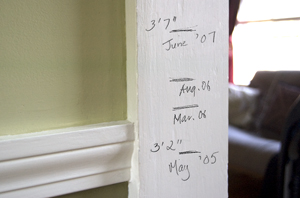 Over a century ago, scientists first proposed that height is a complex trait — one influenced by environmental factors and multiple genes. While subsequent studies revealed that most of the variation in adult height is genetically determined, there has been little success in pinpointing the responsible genes. Some clues have come from rare syndromes of extreme height or shortness caused by severe alterations in specific gene sequences, but by and large, these changes do not explain the normal spectrum of human height.

Now researchers have uncovered the first genetic difference to be reproducibly associated with stature in the general population. The work, published in the September 2 advance online edition of Nature Genetics, is the result of an international collaboration led by researchers at the Broad Institute of Harvard and MIT, Children’s Hospital Boston, the University of Oxford, and Peninsula Medical School, Exeter, and that included researchers from the University of Helsinki, Lund University, the Finland National Public Health Institute, and the University of Bristol.

The research team used a new genome-wide association method to scan the DNA of thousands of people for single-letter differences — single nucleotide polymorphisms, or SNPs — in the genetic code that occur more often in taller people compared to shorter people. The scan zeroed in on a single-letter difference, either a ‘C’ or ‘T’, in the HMGA2 gene that accounted for an estimated 0.3% of the height variation among study participants. Compared to individuals with two ‘T’-containing copies of the gene, those with one ‘C’-containing copy of the gene tended to be taller by roughly half a centimeter, and those with two copies were nearly a centimeter taller on average.

“This is the first convincing finding to explain how DNA can affect normal variation in human height,” said co-senior author Joel Hirschhorn, an associate member of the Broad Institute, a pediatric endocrinologist at Children’s Hospital Boston, and an associate professor of genetics at Harvard Medical School.

Hirschhorn studies height because of its relationship to human growth and development and because, as a pediatric endocrinologist, he frequently sees children with slow growth in the clinic. Stature is also associated with several common disorders, including some cancers. As a phenotype that can be easily, reliably, and accurately measured in large numbers of people, stature may also be an ideal proving ground for unraveling multi-factorial traits. “Because height is a complex trait, involving a variety of genetic and non-genetic factors, it can teach us valuable lessons about the genetic framework of other complex traits − such as diabetes, cancer, and other common human diseases,” said Hirschhorn.

The research team made use of recent advances, including the completion of the HapMap project and the availability of large-scale genomic tools, to begin the search. By analyzing SNPs and height measurements from over 3,000 diabetic and healthy patients — data collected as part of another genome-wide association study, the Diabetes Genetics Initiative (DGI) — Hirschhorn and his colleagues at the Broad generated a list of potential height-related genes. The most promising candidates from the genome-wide search, however, did not prove to be related to height when studied in a larger population.

A break in the search came from Hirschhorn’s colleagues in the United Kingdom. “It is fortunate that we released the data from our analysis and posted it on the DGI website,” said Guillaume Lettre, co-first author of the new study and researcher at the Broad and Children’s Hospital Boston. The online data was accessed by scientists Timothy Frayling of the Peninsula Medical School, Exeter and Mark McCarthy of the University of Oxford, co-senior authors of the new study, who had compiled height and genotype data from nearly 2,000 diabetic individuals in the Wellcome Trust Case Control Consortium (WTCCC).

When data from both groups were combined, the HMGA2 gene rose to the very top of the list. The gene was a reasonable candidate for influencing height, as mutations in the gene can cause rare syndromes of extreme stature. “The real beauty of this finding was that we identified the gene by collaborating,” said Lettre. “That’s one of the nice things about the Diabetes Genetics Initiative, which makes its data available to researchers globally and free of charge.”

To follow up the strong preliminary evidence from the combined genome-wide association studies, the research team went on to verify HMGA2’s connection to height by conducting a second phase of analysis involving nearly 30,000 individuals: adults and children from the Avon Longitudinal Study of Parents and Children (ALSPAC) and the Exeter Family Study of Childhood Health (EFSOCH), European adults taking part in a study of type 2 diabetes risk (UKT2D GCC), Finnish individuals participating in the FINRISK1997 health survey, and a set of tall and short European American and Polish adults assembled for studies of height. The analysis confirmed the effect of HMGA2 variation on height, with the SNP accounting for roughly 0.3% of the normal variability in the stature of both children and adults.

HMGA2 has a relatively small contribution to height, and does not by itself explain what makes people short or tall. The data suggest that there may be hundreds of other DNA variations, each resulting in tiny effects on height. Identifying the other genetic differences controlling height may yield even more information than expected, because the genes may interact in unanticipated ways.

To begin deducing the entire list of genes influencing height, Hirschhorn, Lettre, and colleagues will next combine datasets from tens of thousands of individuals. The results of this search may one day be used to help diagnose children of extreme stature without a known cause. “The genes that affect stature in the general population might also have severe mutations that cause more extreme tall or short stature,” said Hirschhorn. “By defining the genes that influence normal variation in stature, we might also someday be able to better reassure parents that their child’s height is within the range predicted by DNA, rather than a consequence of disease.”

The HMGA2 discovery demonstrates the power of genome-wide association studies to unravel the complexity of human traits and diseases. While this is the first study consistently linking DNA with height, novel genes have been implicated in whole-genome studies of other diseases, such as type 2 diabetes and Crohn’s disease. The pace of discovery has quickened with improvements in technology, in addition to research collaborations that expand studies to tens of thousands of individuals. With new evidence linking DNA to diseases and complex traits like height, scientists move yet another step closer to composing the full story of DNA’s impact on human biology.

Weedon MN et al. A common variant of HMGA2 is associated with adult and childhood height in the general population. Nature Genetics; DOI:10.1038/ng2121

From the Broad Institute: Genome study shines light on genetic link to height