GRID-ing for battle against dengue 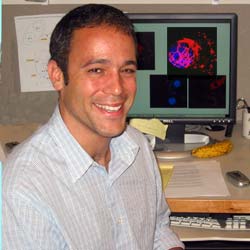 The dengue virus draws its name from a Spanish alteration of the Swahili "Ka-Dinga pepo," meaning a sudden cramp-like disease caused by an evil spirit. Although perhaps not supernatural, dengue can certainly be malicious, with symptoms ranging from high fever, headache, and severe muscle and joint pain, to hemorrhage and shock, which can be fatal. And it is spreading again, due to the resurgence of its mosquito vector in many parts of the world and the globalization of human activity. Recognizing the threat to human health worldwide, an international group of scientists have undertaken the sequencing and analysis of thousands of dengue virus genomes in order to catalog the amazing variation in dengue viral strains and to identify potential therapeutic and vaccine targets.

The Genome Resources in Dengue (GRID) consortium brings together scientists from Broad's Microbial Sequencing Center and the global dengue research community. GRID scientists seek to understand how the virus interacts with its hosts and evolves under pressure from the human immune system. "We intend to illuminate how genomic diversity in the virus arose and how this variability relates to both the virus' evolutionary success and the array of disease outcomes in patients that result from infection," said Matthew Henn of the Broad Institute who spearheaded the formation of GRID and developed this project in collaboration with GRID scientists.

GRID researchers will focus on associating determinants of disease severity with variations in viral sequences, taking advantage of extensive and well-annotated clinical studies established by GRID institutions in Nicaragua, Puerto Rico, Venezuela, and Vietnam. "Our objective is to systematically collect information on the whole genome of this flavivirus to investigate the association with disease severity, intra-host variation, and geographical and immune pressures that can be elucidated by sequence data," said GRID researcher Eva Harris, who is affiliated with the University of California Berkeley School of Public Health and directs field research on dengue in Nicaragua.

Previous work has shown that the dengue virus has four known serotypes and that the human immune system does not provide cross-protection against all four. This poses a great challenge to vaccine development and also means that people can be infected multiple times by the different serotypes. Although individual serotypes were once geographically isolated, the increase in human mobility and other factors have resulted in significant overlap of the viral types and have led to the reemergence of dengue as a major public health concern. "In certain areas of the Americas and Asia, the four serotypes co-circulate, increasing the epidemic risks of severe, secondary infections in immune-naïve populations. Sadly, because these areas of the world are underdeveloped and have limiting medical resources they suffer from higher death rates due to severe infection," said Irene Bosch, a GRID collaborator from the University of Massachusetts Medical School Center in Worcester, Mass., who directs dengue field efforts in Venezuela.

Researchers need to determine how dengue genetic variability is structured to better understand how the virus interacts with the human immune system and how multiple infections can lead to severe forms of the disease. "The current understanding of genetic diversity is limited predominantly on studies of just two proteins coded by the genome," said Henn, who is leading Broad's dengue sequencing efforts, "There is tremendous predictive power acquired through aligning thousands of full-length dengue genome sequences to identify regions of nucleotide conservation," says Henn. "But then, when these sequences can be associated with a specific phenotype — observed properties of the virus — the potential to identify disease specific mutations, and potential vaccine and drug targets, is expanded many fold."

Determining the genetic polymorphisms across the entire viral genome will also greatly benefit the development of cost-effective diagnostic tools and the prognosis of this disease, which currently are difficult. It remains a challenge to predict the different outcomes in disease between individuals, which probably reflects both the genetic variation in the virus being transmitted and the genetic variation in the host that defines the immune response to the infection. To fully understand dengue pathogenesis, GRID researches will be examining both aspects of this variation and will link viral genome data with high resolution genetic typing of specific human leukocyte antigen (HLA) loci.

The GRID Consortium also hopes to be a model for future related undertakings in virology. "This is a collective effort with several scientific objectives that could serve as a platform for other viral genome projects in the near future and the development of new approaches to understand and prevent viral diseases," said GRID researcher Jorge Munoz-Jordán of the Centers for Disease Control and Prevention, Puerto Rico. "We believe these efforts can have a major impact for ongoing efforts in dengue and other viral diseases and we welcome a wider collaboration beyond the initial GRID participants," said Cameron Simmons, who, along with Jeremy Farrar, is a GRID participant from Oxford University, and directs dengue field research in Vietnam.

The Broad's Microbial Sequencing Center is a five-year, $75 million project led by Bruce Birren and funded by NIAID, part of NIH, whose goal is to transform biodefense and infectious disease research by creating resources for DNA sequencing and comparative genome analysis.