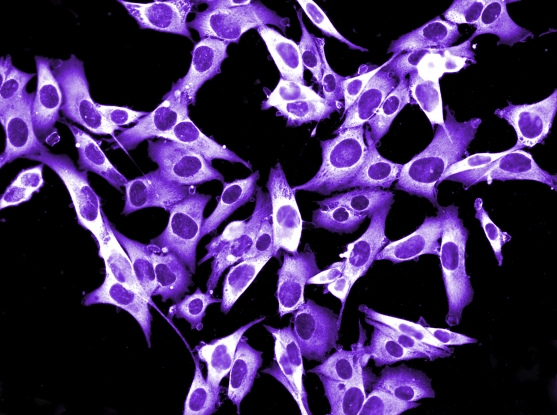 Melanoma is the deadliest form of skin cancer. Notoriously hard to treat, and prone to spreading and recurrence, the disease accounts for more than 9,000 deaths in the United States each year — and incidence is on the rise.

On January 24, researchers from the Broad Institute and Dana-Farber Cancer Institute revealed two new mutations that occur in more than 70% of melanomas. The finding, published online in Science Express, represents the most common mutations identified in melanoma to date, and may point to an essential biological mechanism that allows cancer cells to divide indefinitely. Beyond what this discovery reveals about the biology of this deadly disease, these mutations may prove equally significant because of where they were found.

“This new finding represents an initial foray into the ‘dark matter’ of the cancer genome,” said Levi Garraway, senior associate member of the Broad, and associate professor of medicine at Dana-Farber, the article’s senior author.

Only about 1% of the human genome provides the blueprint for the body’s proteins. The remaining “non-coding” portion of the genome, sometimes referred to as dark matter, is poorly understood. Scientists have only recently begun exploring the relationship between these regions and the body’s cellular structure and processes.

The two mutations, the first highly recurrent ones to be discovered in the “dark matter”, occur separately in a region of the genome that regulates and controls the activity of a gene called TERT. TERT signals the production of telomerase, an enzyme that prolongs cell life, by enabling the cell to divide indefinitely. Increased telomerase activity is a hallmark of many cancers.

“TERT is known to be expressed in 90% of all cancers, but there’s been little genetic evidence of how that might happen,” said Franklin Huang, co-first author of the report along with Eran Hodis, of the Broad Institute and Dana-Farber. Sequencing data from cell lines confirmed the presence of the same mutations in other forms of the disease, including bladder and liver cancers, suggesting the mechanism may be a common source of TERT activation. So far drug companies have been unable to target the enzyme product of the TERT gene, but this finding may renew interest.

“This discovery could cause us to think more creatively about the possible benefits of targeting TERT in cancer treatment or prevention,” said Garraway. “It may also present opportunities to aid in the diagnosis of cancer precursor lesions from the skin.”
In addition to their role in increasing TERT activity, the variants may play an even more fundamental role in melanoma. Further analysis revealed they share the same genetic hallmarks as other mutations caused by exposure to ultraviolet light — which is not the case with other mutations commonly associated with melanoma.

“The next step is figuring out when they occur in the progression of melanoma,” said Hodis, who suggests the mutations could be potentially prognostic.

The team first noted the presence of these non-coding mutations in 17 of 19 whole-genome sequences of melanoma earlier in 2012. These never-before-seen mutations raised the researchers’ eyebrows. Due to the complexity of non-coding regions of the genome, identifying and characterizing mutations remains a challenge, and as a result they can be overlooked. New mutations appearing in the majority of the melanoma samples studied simply seemed too good to be true.

“We had a hard time believing we were seeing something this common,” said Huang, who explained that when variants appear with this sort of regularity in genome data sets, they are often the result of a technological or human error. Even after a follow-up study confirmed the mutations in 17 of 19 melanoma samples, the investigators spent more than a year validating their results, extending their findings to include 50 melanomas of 70 melanoma samples that harbored the novel mutations.

“Over the past few years, we’ve seen many common, recurrent mutations identified in cancer but they have been in coding regions,” said Hodis. Huang and Hodis are confident this unexpected finding opens up a new realm in cancer genomics — believing that other non-coding mutations may hold the key to other fundamental cancer mechanisms.

“The rest of the genome, 99%, is non-coding,” said Hodis. “It’s only reasonable that we will find other cancer-causing mutations out there, hiding.”

Other researchers who contributed to this work include Mary Jue Xu, Gregory V. Kryukov, and Lynda Chin.

In divergence from wolves, doggie diet made a difference
New research investigates inherited causes of autism