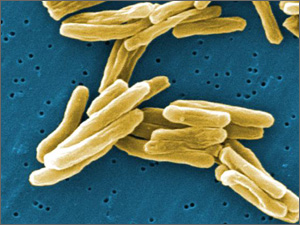 An international collaboration led by researchers in the US and South Africa today announced the first genome sequence of an extensively drug resistant (XDR) strain of the bacterium Mycobacterium tuberculosis, one linked to more than 50 deaths in a recent tuberculosis (TB) outbreak in KwaZulu-Natal, South Africa. As part of this work, genomes of multi-drug resistant (MDR) and drug sensitive isolates were also decoded. Initial comparisons of the genome sequences reveal that the drug-resistant and drug-sensitive microbes differ at only a few dozen locations along the four-million-letter DNA code, revealing some known drug resistance genes as well as some additional genes that may also be important to the spread of TB. The researchers have taken an unusual step of immediately sharing both the genome sequence and their initial analysis far in advance of submitting a scientific paper, in order to accelerate work on drug-resistant TB by researchers around the world.

“Tuberculosis is a major threat to global public health that demands new approaches to disease diagnosis and treatment,” said Megan Murray, one of the project’s principal investigators, an associate member of the Broad Institute of MIT and Harvard and an associate professor at the Harvard School of Public Health. “By looking at the genomes of different strains, we can learn how the tuberculosis microbe outwits current drugs and how new drugs might be designed.”

“Genome information is a powerful tool for understanding the biology of infectious disease, such as tuberculosis,” said Eric Lander, founding director of the Broad Institute of Harvard and MIT. “It is important that genomic data be made immediately available, particularly to researchers in areas most heavily burdened by disease.”

“The sequenced strain is responsible for the vast majority of the more than 300 XDR cases identified thus far in the KwaZulu-Natal province of South Africa,” said Willem Sturm, one of the project’s principal investigators and a leading researcher of the XDR epidemic in KwaZulu-Natal, dean of the Nelson Mandela School of Medicine, and director of the MRC Genital Ulcer Disease Research Unit at the University of KwaZulu-Natal. “Genetic characterization of this strain is essential for developing tools to get this epidemic under control.”

Globally, tuberculosis (TB) is a major cause of infectious disease deaths. Nearly 2 billion people, comprising roughly one third of the world’s population, are thought to carry M. tuberculosis, the culprit bacterium. Major obstacles to controlling the disease stem from the microbe’s ability to evade current treatments, which typically require prolonged use by patients and are often not curative. MDR strains, for example, are resistant to two of the most effective first-line TB drugs, and XDR strains can circumvent first-line as well as some second-line drugs. Adding to the problem, inefficient diagnostic methods for TB make it difficult for doctors to determine whether an individual harbors a drug-resistant strain, often delaying proper therapy.

To shed light on the genetic changes that mediate drug resistance, an international team of scientists undertook a large-scale effort to sequence the genomes of drug-sensitive, MDR, and XDR TB isolates of a strain responsible for the current XDR-TB epidemic in KwaZulu-Natal, South Africa. This strain corresponds to one found in patients in Tugela Ferry, a rural town in KwaZulu-Natal that has recently experienced a severe outbreak of XDR TB among patients infected with the human immunodeficiency virus (HIV). There, 52 of 53 people infected with this strain died. The research reflects a collaboration among researchers in the Microbial Sequencing Center at the Broad Institute of Harvard and MIT, Megan Murray of the Harvard School of Public Health, and Willem Sturm and his colleagues at the Nelson Mandela School of Medicine in South Africa.

The draft genome sequences of the various TB strains each cover roughly 95% of the M. tuberculosis genome. Comparing the DNA sequences in these regions allows the researchers to pinpoint the key differences among them, shedding light on the genetic factors that contribute to TB drug resistance. Strikingly, comparisons of the draft sequences reveal surprisingly few genetic differences among the drug-sensitive, MDR and XDR strains: there are only a few dozen small DNA changes. Some of these differences are located in genes known to be involved in TB drug resistance, while others are found in novel genes, whose roles have not been previously investigated. Some of these genes may represent new drug-resistance genes, while others may simply contain random mutations.

“That a limited set of genetic differences separates one TB strain from another is important,” said James Galagan, the associate director of microbial genome analysis at the Broad Institute. “With the analysis of additional XDR strains, it should be feasible to systematically unravel the biological significance of each genetic variation.”

“These results also lay the groundwork for the development of a rapid diagnostic test for TB,” said Murray. “Such a test would enable more rapid and accurate diagnoses, and help to prevent the spread of TB — especially the most virulent strains.”

A significant fraction of the new TB research was accomplished through the use of a powerful new technology for decoding DNA. That approach, based on the principle of single-molecule sequencing, makes it possible to read hundreds of millions of DNA letters simultaneously.

“New technologies for sequencing DNA can accelerate the pace of genomic research, particularly for infectious disease,” said Bruce Birren, director of the Microbial Sequencing Center at the Broad Institute. “It is important that these technologies also be made available to researchers in the field, where they are needed most.”

Importantly, all of these data have been released far in advance of publication and can be accessed by TB researchers worldwide, helping to spark work on an infectious disease that constitutes a leading threat to global public health. In the next phase of their work, the scientists plan to refine the draft genome sequences and their comparative analysis, and expand the scope of their research to include additional TB strains.

These data can be accessed through the Broad Institute website, at www.broad.mit.edu/XDR_TB, or through the TB database, www.tbdb.org.

About the Microbial Sequencing Center

The Broad Institute's Microbial Sequencing Center is one of two centers funded by the National Institute of Allergy and Infectious Diseases to serve as a national resource for sequencing and analyzing microbial genomes, including those of pathogenic fungi, bacteria, parasites, vectors and related species. The publicly available data are the basis for research on pathogenicity, drug resistance, disease transmission, and vaccine development, and will contribute to global efforts to improve detection, prevention and treatment of microbial infections.

The Broad Institute of Harvard and MIT was founded in 2003 to bring the power of genomics to biomedicine. It pursues this mission by empowering creative scientists to construct new and robust tools for genomic medicine, to make them accessible to the global scientific community, and to apply them to the understanding and treatment of disease.

About the Harvard School of Public Health

Harvard School of Public Health is dedicated to advancing the public’s health through learning, discovery, and communication. More than 300 faculty members are engaged in teaching and training the 900-plus student body in a broad spectrum of disciplines crucial to the health and well being of individuals and populations around the world. Programs and projects range from the molecular biology of AIDS vaccines to the epidemiology of cancer; from risk analysis to violence prevention; from maternal and children’s health to quality of care measurement; from health care management to international health and human rights. For more information visit http://www.hsph.harvard.edu