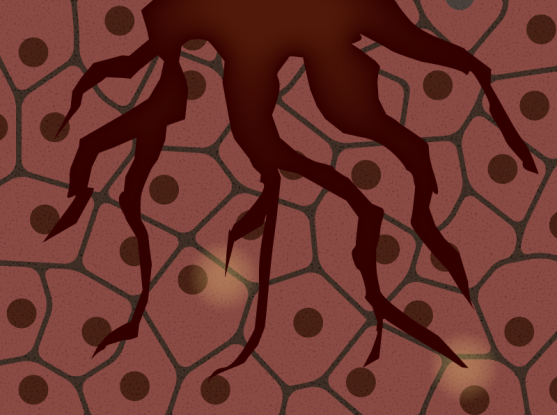 Germ cell tumors are growths that arise from reproductive cells, most commonly in the testes. For young men diagnosed with testicular germ cell tumor (TGCT), the most common type of testicular cancer, the news comes with a silver lining: Most patients with germ cell tumors can be cured with standard chemotherapy. Some, however, are not so lucky. Although almost all patients with TGCT initially improve with chemotherapy, a small number will relapse and develop tumors that resist treatment. A very small number of these patients — usually men in their twenties or thirties — will eventually succumb to the illness.

The reasons why TGCT is so exquisitely sensitive to chemotherapy and why it sometimes returns with a vengeance are not well understood. Christopher Sweeney and Eliezer Van Allen, cancer researchers at Harvard Medical School and oncologists at Dana Farber Cancer Institute (DFCI), suspected that a close look at the tumor’s genome could help answer these questions and potentially suggest new avenues for treatment.

To pursue these questions in the lab, Van Allen, who is also an associate member at the Broad Institute of MIT and Harvard, first needed samples. Because the disease is generally considered curable, research funding is lacking compared to other cancers, so tissue samples from this rare tumor are scarce. Fortunately, Sweeney had for years been collecting tissue donated by patients with testicular cancer and had slowly amassed a bank of dozens of tumor samples.

Van Allen and Sweeney worked with scientists in the Broad Institute Cancer Program and Genomics Platform to sequence and deeply analyze the DNA and RNA in those samples. Appearing in the December 1 issue of Nature, the study reveals unique genetic and functional changes in TGCT, shedding new light on the molecular roots of response and relapse in this disease and suggesting mechanisms that could be at play in other rare germ cell tumors, like ovarian cancer.

An unusual genome, even for cancer

The researchers sequenced the RNA and protein-coding DNA from nearly 60 tumors in Sweeney’s collection and analyzed the data carefully to look for genomic abnormalities. They found that tumor cells acquired mutations in the KRAS oncogene as they became cancerous, but that they maintained working copies of the p53 tumor suppressor gene, which is often inactivated in cancer.

The most surprising insights came when they analyzed the sequence data for copy number variation, looking for extra or missing pieces of DNA in the tumor genome. It was known that germ cell tumors commonly have extra copies of one arm of chromosome 12, but this new analysis revealed widespread genetic rearrangement in the cancer cells.

Co-first author Amaro Taylor-Weiner, a Ph.D. student in Van Allen’s lab, explains his surprise upon first seeing the data. “I’m familiar with looking at this kind of cancer genome data, and the results from this tumor jumped off the page,” said Taylor-Weiner. What he saw was many large-scale instances of copy number variation scattered along the genome. Entire chromosomes or chromosome arms were deleted or duplicated not just once, but two, three, and four times. “We saw that every chromosome was amplified or deleted in a way that you just don’t normally see, which stood out right away. When I saw that, I knew immediately that we were looking at something unusual, even for cancer cells.”

Taylor-Weiner and co-first author Travis Zack, now a medical student at Harvard Medical School, combined the results with data from an earlier study of many cancer types and concluded that the extra chromosomes came from separate duplications of individual chromosome arms, not from doublings of the entire genome.

They also observed that the pattern of copy number variation was one of “reciprocal loss of heterozygosity (RLOH),” in which a chromosome from one parent is present in two or more copies while the same chromosome from the other parent is completely missing. “We had stared at this mutation data for a long time trying to find cancer drivers, but it wasn’t until we did this additional genomic analysis and looked at copy number data in a different way, that we were able to see something new,” said Van Allen. “The variation was totally different from any other cancer type that we’ve studied.”

The copy number variation also pointed the researchers towards a phenomenon known in other cancer types to make cells responsive to chemotherapy, called “mitochondrial priming.” In this cellular state, a particular balance of proteins in the mitochondria primes the cell for self-destruction, or “apoptosis,” allowing chemotherapy to easily tip the balance towards cellular death. It had been shown that stem cells, which have some similarities to germ cells, have loss of heterozygosity and are mitochondrially primed, so the researchers suspected that germ cell tumors might also be primed for self-destruction, explaining their exceptional response to therapy.

Van Allen teamed up with apoptosis expert and DFCI researcher Anthony Letai to analyze the data Letai had generated in functional studies on testicular tumor cells. They observed that the tumor cells indeed were mitochondrially primed, the first evidence of this mechanism at play in a germ cell tumor.

A major goal of the study was to explore the emergence of drug resistance in TGCT. Fortunately, for his tumor bank Sweeney had selected patients who had samples taken before metastatic cancer develops and after drug-resistant tumors appear, allowing the scientists to investigate the evolution of genetic changes. They observed a continued accumulation of RLOH events in tumors that returned after relapse. Analyzing RNA sequencing data from resistant tumors, Taylor-Weiner found a near-complete loss of expression of so-called “pluripotency markers,” proteins that seem to give stem cells their identity.

Taken together, the results suggest that the less stem-cell-like and more mature that testicular tumor cells become, the less sensitive they will be to chemotherapy. An important next step in this research will be understanding what drives the RLOH events, and exploring whether therapeutics can block that factor or reverse the path to drug resistance.

Patient engagement will be key to future clinical studies

Importantly, the study demonstrates the need to reach out directly to patients and encourage participation in clinical research. Although rare, testicular cancer is the most common solid tumor in young men. Future research to further elucidate its molecular inner workings will require lots of samples, so patient engagement will be key.

“Yes, there are very good clinical outcomes for most patients with germ cell tumors, in general, but for the small percentage who will die of the disease, it’s tragic,” said Taylor-Weiner. “We’ve shown that studying a highly treatable cancer is still worthwhile, because it can be a useful clinical model for other illnesses and the insights we gain about tumor evolution and drug resistance can be transformative.” 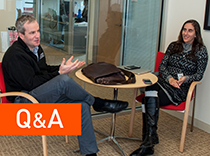 Q&A with Corrie Painter and Eliezer Van Allen: The importance of patient engagement in cancer research