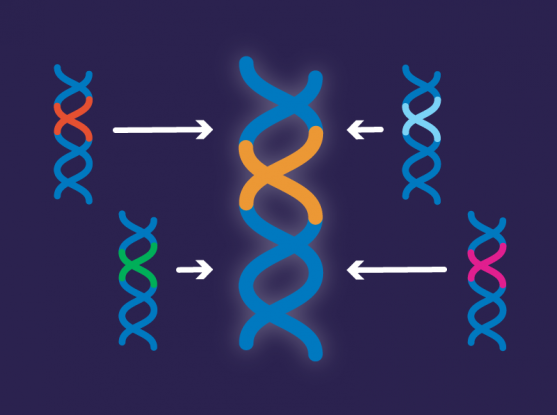 In people with a single-gene variant that puts them at high risk for heart disease, breast cancer, or colorectal cancer, the rest of the genome can alter that risk.

Life can change dramatically when someone learns they are genetically predisposed to a disease, such as a condition called familial hypercholesterolemia, where a mutated gene can lead to elevated cholesterol and increased risk for a premature heart attack. But these kinds of disease predictions are complicated: not everyone carrying such high-risk variants of a single gene develops the disease.

Now, researchers at the Broad Institute of MIT and Harvard, Massachusetts General Hospital (MGH), and Harvard Medical School, in partnership with IBM Research and health technology company Color, have discovered a possible reason why. They studied genetic and clinical data from more than 80,000 people and found that a person’s genetic background influences not only the risk of heart disease in people carrying familial hypercholesterolemia gene variants, but also the risks of breast cancer and colorectal cancer in individuals with high-risk single-gene variants that predispose them to these diseases.

Moreover, the team discovered that for some people with these high-risk single-gene variants, having a low polygenic score — which accounts for the small contributions from many common genetic variants for disease spread throughout the genome — could lower their risk of disease, bringing it closer to the population average.

These findings, published in Nature Communications, have both biological and clinical implications. They help explain why some genetically predisposed individuals do not develop disease, and also suggest ways to more accurately interpret patients’ genetic risk of disease. Eventually, insight from this study could guide more informed decision-making and genetic counseling in clinical practice — for example, to more accurately identify patients who should undergo more frequent disease screenings.

“Patients and clinicians often assume that having a high-risk variant makes eventually getting the disease all but inevitable, but an important subset actually go on to live their lives normally,” said Akl Fahed, co-first author of the study, who is a cardiology fellow at MGH, and a postdoctoral fellow in Broad’s Program in Medical and Population Genetics (MPG). “The traditional approach is to focus on a single base pair mutation linked to disease, but there are 3 billion base pairs in the genome. So we asked whether the rest of your genome can help explain the differing rates of disease we see in these patients, and the answer was a clear yes.”

Minxian Wang of the Broad and Julian Homburger of Color were the other first co-authors of the study.

The study focused on three diseases: familial hypercholesterolemia, where single-gene variants prevent the body from clearing cholesterol from the bloodstream, elevating heart disease risk; Lynch syndrome, where a fault in DNA-repair genes often leads to colorectal cancer; and hereditary breast cancer, caused by defects in the BRCA1 or BRCA2 genes. Most individuals and families with these high-risk variants remain unaware of their inborn risk, and they can not be reliably identified through family history or other risk factors (detailed in a recent companion publication).

The researchers analyzed genetic and clinical information from 80,298 individuals — including 61,664 UK Biobank participants and 19,264 women tested for breast cancer high-risk variants by Color. They looked for people with a particular high-risk variant, calculated their polygenic score for the disease, and then ascertained if the individual developed disease or not through their medical records.

“In trying to do these kinds of studies in the past, there were two main barriers,” said senior author Amit Khera, a physician-scientist leading a research group in the Center for Genomic Medicine at MGH and associate director of the Broad MPG. “You needed very large datasets of participants with and without high-risk variants, and you needed high-quality polygenic scores calculated in these people to quantify their genetic background. The genetics community is only now beginning to have access to these key tools.”

The team found that for a small subset of people with a high-risk single-gene, or ‘monogenic,’ variant for disease, a high polygenic score more than doubled their overall disease risk, from an estimated average of 35 to 41 percent up to 80 percent.

This risk gradient for those with high-risk variants ranged from 13 to 76 percent in breast cancer and 11 to 80 percent in colorectal cancer. But in all three diseases, a favorable polygenic background lowered disease risk, bringing it closer to that of an average person without the high-risk variant.

“The changes in risk are striking,” Khera noted. “For breast cancer, whether a woman’s risk is 13 percent or 76 percent may be very important in terms of whether she chooses to get a mastectomy or undergo frequent screening via imaging. Also, for Lynch syndrome, a more precise risk estimate could similarly be a deciding factor for removing the colon entirely or frequent screening colonoscopies.”

These findings are consistent with previous studies, including one that focused on a large cohort of individuals with high-risk variants for breast cancer, and another that analyzed complex traits, such as height or cholesterol levels, in patients in a health care system. More recently, a separate report from Broad researchers also extended this interplay between polygenic and monogenic risk to blood traits and diseases — indicating that the concept is applicable across human conditions.

This study also provides the scientific foundation for a new approach for assessing disease risk, where accounting for genetic background increases accuracy of risk estimation, even for those with a high-risk variant. Beyond genetic factors, the researchers plan to build models accounting for additional non-genetic factors that are also associated with disease risk.

“We studied the interplay of monogenic and polygenic disease risk,” Fahed said. “But genetics is only part of the story. For heart disease, risk involves other factors like blood pressure and lifestyle risks such as smoking. It is important to account for these as well and develop more fully integrated risk models.”

As polygenic scores and disease risk models make their way into routine medical practice, the researchers say these powerful clinical tools can empower patients to better understand, predict, and prevent disease using genetic information — an idea that Khera is already implementing in MGH’s Preventive Genomics Clinic, which he co-founded. This fall, the clinic will begin offering a clinical test developed by Color that assesses both monogenic and polygenic risk for heart disease.

“We are thrilled to be able to offer state-of-the-art genetic risk assessment to our patients in the coming months. One of our next steps is to educate doctors and patients on more advanced types of genetic risk predictors, such as polygenic scores,” Khera said. “But there’s also important work to be done to further validate integrated genetic risk models in additional populations. The ability to reliably classify monogenic variants as high-risk and stratify the population using polygenic scores is higher in people of European ancestry than other groups, just because that is where most of our training data comes from. So, we need to diversify datasets and improve the models so that they work well for people from different ancestries, ensuring that genomic risk stratification benefits everyone.”

Support for this research was provided in part by the National Heart, Lung, and Blood Institute, the National Human Genome Research Institute, Fondation Leducq , the American Heart Association, a Merkin Institute Fellowship from the Broad Institute of MIT and Harvard, a Hassenfeld Scholar Award from Massachusetts General Hospital, and a sponsored research agreement from IBM Research.