The genetic architecture of risk for autism spectrum disorder 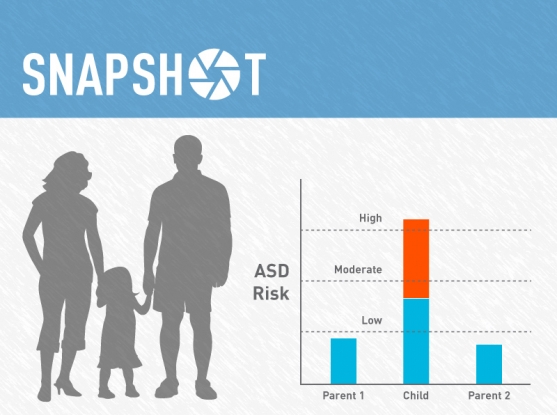 A new study of inherited genetic risk indicates that common genetic variations throughout the genome act in addition to rare, deleterious mutations in autism-associated genes to create risk for autism.

Studies of genetic risk for developing autism spectrum disorder (ASD) often compare DNA from those diagnosed with autism to that of neurotypical controls, but these approaches can be confounded by external factors. To get a clearer look at the genetic underpinnings of autism risk, a team led by researchers from the Broad Institute’s Stanley Center for Psychiatric Research and the Analytic and Translational Genetics Unit at Massachusetts General Hospital and Harvard Medical School took a new approach, published in Nature Genetics, comparing genetic influences within families in which a child has been diagnosed with autism.

In the human genome, common genetic variations can each contribute a small level of risk for developing a given disorder. These variants can be aggregated to create a “polygenic risk score,” which represents part of an individual’s overall disorder risk.

In this study, Elise Robinson, an associated scientist at Broad and assistant professor of epidemiology at the Harvard T.H. Chan School of Public Health, first author Daniel Weiner, a scientist in Robinson’s lab, and colleagues calculated polygenic risk scores for developing autism in members of 6,454 families with one or more children diagnosed with ASD. The risk scores were based on the participants’ individual genotypes compared against data from genome-wide association studies.

On average, children’s genetic risk scores for any phenotype equal an average of their parents’ scores. However, the team discovered that children with ASD have a higher risk score on average for developing ASD — meaning that more of the contributing common variants from the parents have been inherited together, versus what would be expected if the risk score was an average of the parents’. Children with ASD in the study were also likely to have independently over-inherited their parents’ polygenic risk for developing schizophrenia, as well as polygenic influences associated with more years of education (which are strongly correlated with the polygenic influences on IQ score).

The team also found that risk for developing ASD is increased beyond the common polygenic risk score if a rare, harmful mutation, newly arising in the child, occurs in an autism-associated gene. In children with ASD, these rare variants are associated with more severe neurodevelopmental impacts, such as intellectual disability, seizures, and motor function delay.

The study results point to multiple types of genetic risk for ASD, highlighting the need for a better understanding of the behavioral and cognitive traits associated with autism in order to eventually develop models or therapies. Using genetic data from parents and their children to dissect the roots of a disorder also eliminates many potential confounding factors, and the research team noted the utility of this analytic method for studying other types of polygenic risk.

Antibiotic-resistant microbes date back to 450 MYA, well before the age of dinosaurs
In cancer research, diversity makes a difference