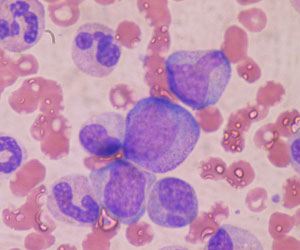 A commonly inherited gene deletion can increase the likelihood of immune complications following bone marrow transplantation, an international team of researchers reports in the November 22 advance online issue of Nature Genetics. When the gene, called UGT2B17, is missing from the donor's genome but present in the recipient's, transplants have a significantly greater risk of a serious side-effect known as graft-versus-host disease, in which immune cells from the donor attack tissues in the recipient.

"This finding gives us a glimpse into the genetic incompatibilities that can complicate transplants," said first author Steven McCarroll, an assistant professor at Harvard Medical School and an associate member of the Broad Institute of MIT and Harvard, who led the study while working as a postdoctoral fellow with David Altshuler at Massachusetts General Hospital and the Broad. "There are likely many other compatibility loci left to be found, and with the enhanced capabilities for surveying human genetic variation, it will become increasingly feasible to find them."

The basic premise behind organ and tissue transplantation is simple: remove the diseased part from one patient and replace it with a healthy counterpart from another. But there are several facets of the process that are anything but simple, including the genetic incompatibilities that can exist between donor and host tissues. Graft-versus-host disease (GVHD) is one immune-related condition that can arise as a result of these genetic mismatches.

GVHD is a common yet serious complication of bone marrow transplantation (also known as "hematopoietic stem cell transplantation"), a procedure in which blood and immune "stem cells" are isolated from a healthy person's marrow and transferred to a patient with a life-threatening disease, often cancers of the blood or immune system. As a result of the transplant, the donor's blood and immune systems are reconstituted in the recipient's body, helping to cure the offending illness. Sometimes, donor immune cells detect unfamiliar proteins in their new host and attack the patient's tissues, causing GVHD.

Not surprisingly, GVHD almost never occurs when transplants involve identical twins, who carry the same DNA throughout their genomes. However, it frequently arises following transplants between siblings who are genetically similar though not identical, even when they share identical DNA in a key region of the genome known as the HLA.

The HLA region is well known for its role in determining tissue compatibility, and certain parts of it are routinely tested in both donors and recipients (known as "HLA-matching") to gauge whether a suitable match can be made. What is not known, however, is which sites elsewhere in the genome might also impact the success of organ transplantation.

A few years ago, McCarroll and his colleagues, as well as other scientists working independently, made the intriguing observation that individuals can be missing relatively large chunks of the genome — often involving entire genes — and that this type of genetic variation is common in the human population. That means that a person could inherit the same gene deletion from both parents and thus lack the gene entirely.

The fact that these deletions are fairly common in human populations suggests that they have been around for tens of thousands of years, and that the encoded genes were not critical to our ancestors.

"We asked, ‘Are there situations in which these deleted genes might matter more to us than to our ancestors,'" said McCarroll. "One thing that is part of our world that wasn't part of theirs is transplantation."

The idea was that if a person lacks a certain gene, his immune system has likely never learned to accept or "tolerate" that gene's corresponding protein. If his immune system somehow came across the protein — as it might after a bone marrow transplant — the protein would be perceived as foreign, thereby raising the risk of immune complications.

In exploring this idea, McCarroll teamed up with James Bradner, then a postdoctoral fellow at the Broad Institute, who is now an instructor in medicine at the Dana-Farber Cancer Institute and a Broad Institute associate member. Bradner routinely performs bone marrow transplantation as part of his clinical work as an oncologist, and knew that there was an important precedent for this missing genes idea in something called "sex mismatch."

"It's been clear for some time that bone marrow transplants involving a female donor and a male patient pose a higher risk of GVHD," said Bradner. "This ‘sex mismatch' arises from genes that are carried on the male-specific Y chromosome and are therefore present in males but not in females. It seemed plausible that gene deletions elsewhere in the genome could produce a similar consequence."

To investigate this question, McCarroll and his colleagues analyzed a set of commonly deleted genes in roughly 1,300 donor-recipient pairs who were HLA-identical siblings. These samples are part of collections maintained by researchers at Helsinki University, Dana-Farber Cancer Institute, Fred Hutchinson Cancer Research Center, and other institutions.

"There is a handful of places where physician-scientists had the vision to collect these DNA samples over a long period of time," said McCarroll. "That vision has made projects like this one possible."

The DNA analyses zeroed in on a particular gene called UGT2B17. The researchers found that the mismatch that occurs when the gene is absent from donor DNA yet present in recipient DNA is associated with a greater risk of acute GVHD, which arises within 100 days after bone marrow transplantation. At one hospital, the odds of developing the disease were about 1 in 6 among HLA-identical siblings without the gene mismatch, but were about 2 in 5 — a roughly 2.5-fold increase — among HLA-identical siblings with the UGT2B17 mismatch. The researchers observed similar patterns among patients at other hospitals.

Beyond genetics, additional lines of evidence also point to a role for UGT2B17 in GVHD. Data from the Nature Genetics study as well as previous independent studies collectively indicate that distinct branches of the immune system recognize parts of the protein encoded by the UGT2B17 gene, providing tangible proof that it is targeted by the immune system in patients.

The exact features of this gene that may help stoke the immune system in transplant patients are not yet fully clear. But there are some intriguing hints, McCarroll notes. First, the protein encoded by the gene is large, more than 500 amino acids long. In general, the longer a protein, the more opportunities for the immune system to "see" it. The protein also resides on the surface of cells, a prime spot for detection by antibodies, which are part of the immune system's first responders.

Most important, the UGT2B17 protein is abundant in the same tissues that are targeted by immune cells in acute GVHD (liver, intestine and skin), indicating that it is in the right place at the right time.

McCarroll cautions that it is still too early to know whether analyses of this gene should be incorporated into the suite of clinical tests that are run in order to match potential bone marrow donors and recipients. "The two important steps are to see this result broadly replicated in the field, and to precisely measure its effect size, so that clinical scientists can decide whether to include this among the established criteria that are used to find the ideal donor for each patient," he said.

The research was supported by the Broad Institute of MIT and Harvard, the Academy of Finland, the Helsinki University Central Hospital Research Fund, the Fred Hutchinson Cancer Research Center, a Lilly Life Sciences Research fellowship, the S. Juselius Foundation, the Center of Excellence Program of the Finnish Academy and the National Institutes of Health.