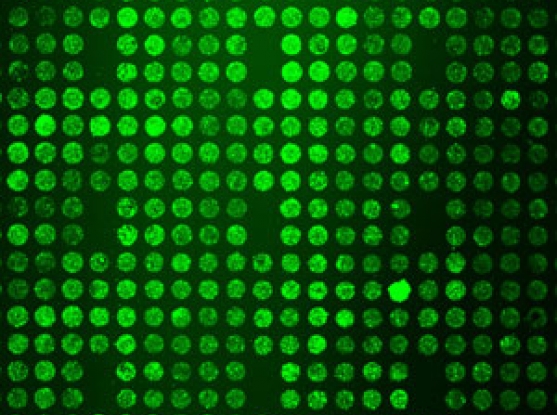 A little more than a decade ago, researchers discovered an ancient mechanism that cells use to silence genes. Like a dimmer switch turning down a light, RNA interference (RNAi) dials down gene activity in simple organisms as well as in humans. Scientists have seized RNAi as a tool to “turn down” genes to determine what they do, an area of study known as functional genomics.

In order to take full advantage of RNAi technology for disease research, scientists in the Broad Institute’s RNAi Platform launched an effort to build a library of RNAi reagents to target every gene in the human and mouse genomes. Their efforts culminated in a large, well-characterized collection of RNAi reagents that is openly shared with the scientific community. The platform has since added a complementary resource of reagents known as open reading frames, or ORFs, to “turn on” genes.

While the platform’s libraries are powerful tools to probe gene function, scientists wishing to employ them face limitations of cost, access, and throughput. The existing screening methods consume large quantities of cells, reagents, and viruses, in addition to requiring specialized equipment. Several years ago, a team of Broad researchers wondered if shrinking the entire process would make large-scale screening faster and cheaper, allowing more scientists in more places to take advantage of the great resource.

Their efforts have now resulted in a new, portable “cell microarray” called MicroSCALE (Microarrays of Spatially Confined Adhesive Lentiviral Features), which overcomes the limitations of existing functional genomics methods. The screening device represents another innovative tool in the platform’s toolbox for probing gene function. Led by David Sabatini, Broad senior associate member, Whitehead Institute for Biomedical Research member, and senior author of the new work, the researchers also demonstrate the microarray’s capabilities, shedding light on the genes and pathways underlying drug resistance in melanoma. The work, which was supported in part by a grant from the Broad Institute’s Scientific Planning and Allocation of Resources Committee (SPARC), appears in the May 15 issue of Science Signaling.

“The RNAi and ORF libraries at the Broad represent a tremendous investment and are arguably the world’s best tools for doing functional genomics,” said Kris Wood, a postdoctoral scholar in Sabatini’s laboratory and first author of the new work. “Yet, once developed, actually using these tools to ask certain biological questions can be difficult, due to the logistical and financial realities associated with how screens are done.”

The researchers aimed to develop a new system that could overcome the challenges of current screening methods. One approach, known as multi-well plate-based screening, is the historical gold standard for doing functional screens. This screening method is versatile, but it demands a large supply of cells, carries significant costs for reagents, and requires the use of sophisticated equipment not widely available. A newer method, called pooled screening, enables thousands of different viruses to be tested simultaneously in one cell culture dish. The approach is powerful and cheaper than multi-well screening, however, it limits the kind of cellular measurements that can be taken and requires a significant amount of cells and labor.

To overcome the limitations of these methods and capture their best features – the assay versatility of multi-well plate-based screening and the efficiency of pooled screening – the team set out to create a system that miniaturizes the process. The researchers designed a system in which a glass slide is printed with one to five thousand microscopic spots of a special cell-adhesive gel. They next devised a method for concentrating the RNAi- and ORF-delivering viruses so that a dose of one unique virus could be added to each spot.

The plate can then be stored in a freezer until a scientist is ready to start a screening experiment and seed it with cells. After incubating the microarray for several days and allowing the viruses to turn on or off genes in the cells, the scientist can expose the cells to a drug or environmental condition. The slide can then be scanned – without the need for microscopes – to quickly and easily quantify a broad range of features that have been fluorescently tagged. 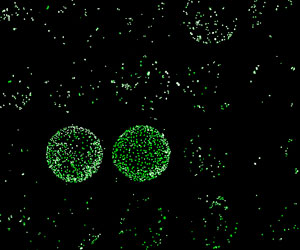 Close-up of cell microarray featuring ORFs that overexpress
kinase genes. In this screen, melanoma cells were grown on
the array and treated with MAP kinase inhibitors. At most spots,
melanoma cells died. The two bright spots represent surviving
cancer cells in which the NF kappa B pathway was activated,
demonstrating its role in drug resistance.
Courtesy Kris Wood.

With their new device in hand, the team took aim at a real and emerging clinical problem: drug resistance in melanoma, the most deadly form of skin cancer. Half of all melanomas harbor a mutation in a gene called BRAF, and the FDA recently approved a powerful new drug that inhibits mutated BRAF and causes tumors to shrink in many patients. The success, however, is short-lived: the cancer comes back within a year.

“Understanding what happens in the tumor from the initial state where it responds well to drugs, to a resistant state where it no longer cares about the drug, is a really interesting biological question,” said Wood.

Wood and his colleagues saw the cell microarray as a promising way to test drug resistance on a large scale. Collaborating with Broad senior associate member Levi Garraway, they began by testing the BRAF-targeting drug on melanoma cells and rediscovered genes and pathways known to play a role in resistance to that drug.

The team next wanted to test the microarray’s ability to reveal new resistance genes. They seeded melanoma cells onto microarrays featuring ORF-carrying viruses that overexpress genes from the kinase family of proteins, known for its involvement in cancer. Each microarray was treated with one of several drugs related to the BRAF-targeting drug. On each microarray, the same characteristic pattern of surviving cells was seen. “This told us not only the individual genes that might confer resistance, but how they might be working together and how the particular biological mechanism of a drug influences the cell’s ability to become resistant,” explained Wood.

After testing a broader range of drugs on the microarrays, the researchers made some revealing findings. The pattern of genes that seem to confer resistance to a given drug allowed them to infer the drug’s mechanism of action, without knowing what it was beforehand. They also observed that drugs targeting similar biological processes tended to give very similar profiles of resistance-conferring genes, a finding with potential clinical implications. Physicians often try to combat drug resistance by giving first- and then second-line treatments targeting the same pathway, but these findings suggest that using a combination of drugs targeting independent pathways is a better way to avoid resistance.

Looking closely at a class of drugs known as MAP kinase inhibitors, the team used the microarray to validate the role of a cellular pathway known as the NF kappa B pathway in melanoma drug resistance. They also confirmed the finding with real patient samples, showing that activity of the NF kappa B pathway correlated with drug sensitivity. Wood explained that this finding is potentially very powerful because it could one day help predict which patients will respond to drugs or pave the way for developing drugs that inhibit the pathway and prevent resistance. Importantly, it has relevance for current clinical trials that combine MAP kinase inhibitors with immunotherapy, which is known to activate the NF kappa B pathway. “Our results suggest that those combination therapies could inadvertently be causing drug resistance rather than preventing it,” said Wood.

The microarray is currently in prototype stage, but Sabatini, Wood, and RNAi Platform director and study co-author David Root hope to see this technology become a widely available option for screens. “The ease of doing screens with the MicroSCALE array is remarkable,” said Wood. By shrinking the screening process, the microarray opens the door for doing large-scale screens with very small numbers of cells, such as primary cells from tumor biopsies. It does not replace the existing multi-well plate-based or pooled screening methods, but complements them. “It’s building the arsenal of options that we have, allowing us to continue to ask more and more important biological questions.”

This project involved the Broad’s RNAi Platform, which produced viruses and helped develop the MicroSCALE technology and analysis methods; the Cancer Program, which collaborated on the melanoma drug resistance experiments; and the computational expertise of Broad scientists Pablo Tamayo, Jill Mesirov, and colleagues. Virus preparation, screening follow-up, and computational analysis was conducted at the Broad, while array production, screening, and follow-up experiments were done at Whitehead. Other Broad researchers involved in the new work include David Konieczkowski, Cory Johannessen, Jesse Boehm, Olga Botvinnik, and Bill Hahn.

New under the sun: recurrent genetic mutations in melanoma
Raising HDL not a sure route to countering heart disease