A flurry of risk factors for Crohn's disease 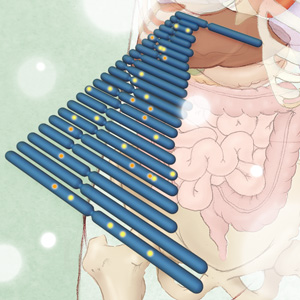 With the new meta-analysis, over 30 genetic risk factors (shown as bright spots on chromosomes, shaded in blue) have been linked to the bowel disease known as Crohn's; future work may reveal other genetic risk factors.
Image courtesy of Janet Iwasa and Bang Wong

The causes of Crohn's disease, a chronic inflammation of the gastrointestinal tract, have evaded researchers since the disease was first described 75 years ago. Because of the condition's high heritability, DNA likely plays a role, but until recently little was known about the genes and biological pathways that go awry to cause symptoms like diarrhea, severe abdominal pain, and weight loss.

Recent genomic advances, however, have ushered in an era of rapid discovery and uncovered genetic links to many illnesses, with Crohn's disease at the leading edge. In 2001, researchers, including several now working at the Broad Institute of MIT and Harvard, made breakthroughs by revealing the first clear genetic risk factors for Crohn’s disease: the NOD2 gene and a chromosomal region called 5q31. Soon after, the floodgates of discovery opened with the mapping of common human genetic variation and the advent of high-throughput genome scanning. In the past year and a half, another ten DNA regions were linked to Crohn's disease, one of the first to be aggressively explored with an unbiased, genomic method known as a genome-wide association study.

The genetic nature of the disease is becoming even clearer, thanks to a recent international collaboration led by Broad senior associate member Mark Daly, who is an assistant professor in the Center for Human Genetic Research at Massachusetts General Hospital. The new findings, appearing in the June 29 online version of Nature Genetics, bring the list of DNA changes implicated in Crohn's disease to more than 30. As Daly explained, Crohn's disease has seen more success through whole-genome association studies than has any other human illness, giving unprecedented insight into this mysterious illness and showing the method's potential to unravel other complex diseases.

Early whole-genome studies of Crohn's had identified ten single-letter DNA changes, called "SNPs," with the strongest impact on disease risk. To locate SNPs with smaller effects on risk, Daly and his fellow researchers combined data from studies by three groups — the North American-based NIDDK Inflammatory Bowel Disease (IBD) Genetics Consortium, the Belgian-French IBD consortium, and the Wellcome Trust Case Control Consortium based in the UK. By joining data from more than 3,200 cases and 4,800 controls, and replicating the results in a second study involving 3,664 additional cases, the team identified 21 new genetic risk factors for Crohn's disease and confirmed 11 from earlier work, including the NOD2 and 5q31 SNPs.

Genetic factors contribute to roughly half the risk for Crohn's disease. Together, the 32 DNA variations identified to date explain one-fifth of that heritable variation in risk, suggesting there is still much work ahead. Although the SNPs each carry very slight increases in risk, they provide crucial insights into Crohn's biology, guiding researchers to biological pathways they may not have studied otherwise.

"The value we get from identifying a large number of associations is not what each of them tells us individually, but what the 32 SNPs together reveal about the full picture of Crohn's pathogenesis," said Daly. The biological effects of many of the new SNPs are unknown, although some are thought to play a role in innate immunity and autophagy, two physiologic processes that were implicated in the original genome-wide association studies. This provides support for the hypothesis that these pathways are critical to Crohn’s disease, yet much work remains to fully define what goes wrong in the illness. “We're just beginning to scratch the surface of the biological understanding that these genes are going to give us," said Daly.

What the meta-analysis does reveal is a sense of the disease’s complexity. “Before whole-genome association studies were gearing up two years ago, we had only two genetic associations with Crohn’s disease, with only one of those fully mapped to a single gene,” said Daly. “Those were two pieces of a very complicated puzzle.” Though researchers initially thought the disease’s genetic components — and those of other complex diseases — might number in the single digits to tens of genes, they now realize that these initial guesses were quite conservative.

To fill in the missing pieces, the team plans to expand the meta-analysis with forthcoming data from other association studies. They also hope to identify the true causal DNA changes in sequence or gene copy number through re-sequencing and fine-mapping, in addition to searching for rare genetic changes at these genes that might further contribute to risk. “We still don’t fully understand the genetic architecture of this disease,” said Daly. “But with some of the components in hand, we have a much better idea of what that puzzle might look like, and how we need to go about filling in the rest.”

Meet the genome's puzzle masters
In the Boston Globe: "Of microbes and men"