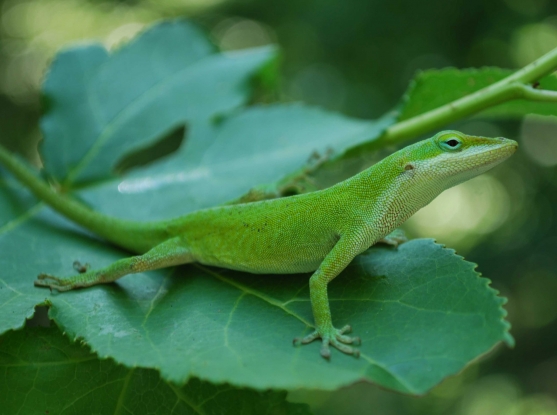 The green anole lizard is an agile and active creature, and so are elements of its genome. This genomic agility and other new clues have emerged from the full sequencing of the lizard’s genome and may offer insights into how the genomes of humans, mammals, and their reptilian counterparts have evolved since mammals and reptiles parted ways 320 million years ago. The researchers who completed this sequencing project reported their findings August 31 online in the journal Nature.

The green anole lizard (Anolis carolinensis) – a native of the Southeastern United States – is the first non-bird species of reptile to have its genome sequenced and assembled. Broad researchers have assembled and analyzed more than 20 mammalian genomes – including those of some of our closest relatives – but the genetic landscape of reptiles remains relatively unexplored.

“Sometimes you need to be at a certain distance in order to learn about how the human genome evolved,” said Jessica Alföldi, co-first author of the paper and a research scientist in the vertebrate genome biology group at the Broad Institute. “You have to look out further than you were looking previously.”

Lizards are more closely related to birds – which are also reptiles – than to any of the other organisms whose genomes have been sequenced in full. Like mammals, birds and lizards are amniotes, meaning that they are not restricted to laying eggs in water. “People have been sequencing animals from different parts of the vertebrate tree, but lizards had not been previously sampled,” said Kerstin Lindblad-Toh, scientific director of vertebrate genome biology at the Broad and senior author of the Nature paper. “This was an important branch to look at.”

Four hundred species of anole lizards have fanned out across the islands of the Caribbean, North America, Central America, and South America, making them an appealing model for studying evolution. Although much is known about their biology and behavior, genomic information may be a critical missing piece for understanding how the lizards have become so diverse. “Anoles are rich in ecology and morphology and have just the right amount of diversity to make them interesting yet tractable to study,” said Jonathan Losos, an author of the paper, professor at Harvard University, and author of the book Lizards in an Evolutionary Tree: Ecology and Adaptive Radiation of Anoles. “But a big stumbling block in studying them has been that they have not been great organisms for classical genetic study. The genome is going to revolutionize our ability to study that aspect of their evolutionary diversification.”

One of the questions this newly sequenced genome may help resolve has to do with the origin of conserved, non-coding elements in the human genome. These regions do not contain protein-coding genes but are thought to have critical roles since they have remained unchanged for millennia. Scientists wondered where these mysterious elements came from and hypothesized that they may be the relics of transposons – jumping stretches of DNA that were at one time able to copy and paste themselves throughout the genome. In humans, many of these so called “jumping genes” have lost their jumping ability, but in anole lizards, they continue to hop.

“Anoles have a living library of transposable elements,” said Alföldi. The researchers aligned these mobile elements to the human genome, and found that close to 100 of the human genome’s non-coding elements are derived from these jumping genes. “In anoles, these transposons are still hopping around, but evolution has used them for its own purposes, turning them into something functional in humans.”

In addition to insights into human and mammalian genomes, the anole lizard’s genome also offers up clues about how lizard species evolved to populate islands in the Greater Antilles. Much like Darwin’s finches, anoles adapted to fill all of the ecological niches the islands have to offer. Some lizards have short legs and can walk along narrow twigs; others are green in color with big toe pads suited for living high up in trees; others are yellow and brown and live in the grass. But unlike the finches, lizards on different islands have independently evolved diverse communities of these twig, canopy, and grass dwelling species – almost identical lizard species have evolved in parallel on the islands of Hispaniola, Puerto Rico, Cuba, and Jamaica.

“These lizards have been compared to Darwin’s finches and in many respects they are similar,” said Losos. “They show the workings of natural selection as species adapted to different habitats. But the difference is in the case of the lizards, this evolution has happened four times, once on each of the different islands.”

By sampling the genomes of more than 90 species, the researchers were able to make a preliminary map of how these species evolved to colonize the islands.

“This is setting the stage for the research community to be able to look for signatures of adaptation in a very informative and well thought through way,” said Lindblad-Toh.

The researchers were also able to create a parts list of proteins found in green anole eggs, which they compared with those found in eggs from chickens and found that both bird and lizard egg genes are evolving rapidly. They also found many genes in the anoles genome associated with color vision, which anoles rely on to identify choice mates (males and females of some species display vividly colored flaps of skin beneath their necks called dewlaps).

“Anoles have extremely good color vision – some species can even see in the ultraviolet range,” said Losos. Other studies have shown that anoles can distinguish between similar colors and patterns. “It’s pretty clear that one function of the dewlap is to distinguish one species from others and that they use the dewlap to determine whether another individual is in another species or not.”

The researchers performed the first analysis of several other unusual features in the anole genome, including microchromosomes – tiny chromosomes sometimes found in reptiles, amphibians, and fish but never in mammals. They also found a complete lack of isochores, regions of the genome with high or low concentrations of the nucleotides “G” (guanine) and “C” (cytosine) which give human chromosomes a distinct banding pattern.

Additionally, the team found the sex chromosomes of the lizard – something that researchers had only been able to hypothesize about before. Like mammals, green anoles appear to have XX and XY chromosomes (unlike birds, in which males have two identical sex chromosomes called ZZ and females have two different ones known as ZW). The lizard’s X chromosome turned out to be one of its many microchromosomes.

Each of these insights is the fruit of collaborative efforts among scientists with expertise in the study of proteins, gene family evolution, green anole behavior and biology, computational analysis, and more. “This work represents a partnership between biologists and computational biologists,” said Federica Di Palma, a co-first author of the paper and assistant director of the Broad’s vertebrate genome biology group. “We were able to leverage all of these views to gain insight into genome evolution in general.”

Funding for this work was provided by the National Human Genome Research Institute (NHGRI) with early support for anole genomics from the David and Lucile Packard Foundation. All sequence data was produced by the Genome Sequencing Platform of the Broad Institute.

From the BroadMinded blog:
Breaking open the lizard egg proteome