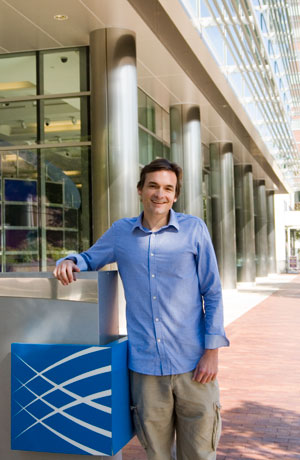 Postdoctoral fellow Steven McCarroll’s accomplishments over the last four years have helped reveal a new form of human genetic variation, led to discoveries in several disease areas, and expanded the scope of genetic studies around the world. This year, they have also earned him an award that he considers meaningful because it comes from so close to home: the Broad Institute’s Lawrence H. Summers Fellowship. Created in honor of former Harvard President Lawrence Summers, the fellowship provides support and recognition for a young Harvard or MIT scientist working at the Broad Institute in the laboratory of a core member or associate member, or in a Broad Institute program or platform.

Since joining David Altshuler’s laboratory at the Broad and MGH in 2004, McCarroll has worked to understand how the large-scale architecture of the human genome varies from person to person and the biological significance of that variation. Over the next year, with the aid of the award, McCarroll hopes to develop an inexpensive platform that will help researchers identify new variants and quickly assess their role in disease.

“Over the past four years, Steve has kept Broad at the cutting edge of research into structural variation in the human genome,” said David Altshuler, director of the Program in Medical and Population Genetics.

His colleagues say that his commitment to helping his co-workers and enabling research throughout the Broad community has characterized his time here. “Steve has been a positive force in our lab groups and throughout the Broad community for several years, always willing to advise or participate in projects and contribute effort even when no particular personal gain is available,” said Broad Associate Member and MGH faculty member Mark Daly.

McCarroll said that receiving this award is personally meaningful because his colleagues and the Broad Institute’s encouragement of new ideas and approaches have been so important to him. “My fellow scientists and the scientific environment here have helped me develop as a scientist, and at the same time it’s been an enormously fun place to come to work every day. I can’t imagine receiving any award that would mean as much as being recognized by my colleagues here.”

Shortly after he started his postdoc, McCarroll read a paper by Broad associate member Charles Lee about an experimental observation that the genomes of apparently normal individuals could differ in the number of copies of large genomic regions they contained — a phenomenon known as copy number variation (CNV). He wanted to integrate these emerging observations about CNV with studies of fine-scale sequence variation, in which one base pair can vary between individuals (known as a single nucleotide polymorphism or SNP). At the time, there was extensive high-resolution data on human SNP variation from the International HapMap Project. McCarroll wondered whether deletions that were segregating in the population might leave “footprints” in such SNP data — in the form of genomic regions in which a parent and child appeared not to share any SNP alleles — and whether one could use such footprints to make a high-resolution map of human deletion alleles. Data from such SNP assays were usually discarded in human genetics, in the belief that the apparent “mendelian inconsistency” of such data meant that the assay was untrustworthy. Within weeks, he had developed an algorithm, ran it on the discarded data, and discovered hundreds of deletion variants. Surprisingly, he found that a large number of human genes have common deletion alleles, and that many individuals are “homozygous deleted” for these genes and completely lack them in their genomes.

The discovery of these missing genes led McCarroll to wonder whether they might help explain a longstanding mystery in transplantation medicine — why organ and bone-marrow transplants are sometimes well-tolerated, but at other times result in organ rejection or graft-versus-host disease, even when donors and recipients are matched at the known compatilibility loci. More specifically, he wondered what might happen to a person who lacks a gene if they receive a transplant of tissue from a donor who does have the gene. Could this genetic discrepancy contribute to the recognition of tissue as “foreign”? The idea has spurred an ongoing international collaboration, bringing together scientists from the Dana-Farber Cancer Institute, the University of Michigan, the Finnish Red Cross, the University of Helsinki, and the Fred Hutchinson Cancer Research Center.

Altshuler was deeply impressed by his postdoctoral fellow’s ingenuity and thoroughness. “I soon discovered that Steve’s creativity is matched only by his rigor, and that this was rock-solid,” he said.

McCarroll wanted to understand how genome structural variation might influence human biology and phenotypes. Researchers were just beginning to pursue “genome-wide association studies” using microarrays of SNP assays to scan the human genome for disease-associated variation. However, the arrays offered little information about structural variants such as CNVs. McCarroll proposed developing “hybrid” arrays in which SNPs and CNVs could be typed in the same experiments, by populating SNP arrays with dedicated “copy-number probes.” He teamed up with Finny Kuruvilla and Josh Korn, two other members of the Altshuler lab, and members of the Genetic Analysis Platform to design a microarray that combined both SNP and CNV information onto one chip, allowing scientists to query both types of genetic variation at once. Their design, which started as a custom design for studies at Broad, was subsequently commercialized by Affymetrix; the resulting arrays (the Affymetrix SNP 5.0 and 6.0 arrays), are now used throughout human genetics. To help enable genome-wide association studies for CNVs, McCarroll and his colleagues went on to develop a detailed map of the CNVs that segregate in the human population, and a set of software tools for analyzing CNV in disease, described in two recent papers in Nature Genetics. Enabled by these resources, analysis of copy-number variation is quickly becoming a core goal of genome-wide association studies and led to recent discoveries of CNVs in autism and schizophrenia.

McCarroll’s accomplishments have had a ripple effect at the Broad Institute, catalyzing many additional academic and industrial collaborations; improving array technology and efficiency; and shedding new light on the role of CNVs in disease. Although he has helped create tools that shape current studies of genetic variation, McCarroll has not lost sight of the biological and medical questions that drive him and the rest of the scientific community at the Broad Institute.

“I’m a biologist at heart rather than an engineer,” he said. “While it is enormously rewarding to see colleagues putting these tools to use, I’m really interested in the biological questions. The tools are a means to an end.”

Turning back to the biological questions, McCarroll discovered a deletion polymorphism upstream of a gene called IRGM that appeared to explain the association of that gene with Crohn’s disease. He found that the deletion altered the sequence upstream of the gene, causing it to be expressed in a different set of cells and tissues. Working with Ramnik Xavier, Mark Daly, and colleagues at MGH, the team showed that expression levels of IRGM influence the ability of cells to cope with intracellular bacteria, a physiological process implicated in Crohn’s. Their results, published in Nature Genetics this month, provide an early mechanistic demonstration of how a common genetic polymorphism acts through genes and cells to influence a human disease.

As he works on new projects over the next year, McCarroll will keep in mind the larger goal — to help understand how human genetic variation influences phenotypes, as a way of uncovering the molecular basis of human disease. “This award is enabling and encouraging — and it’s also a chance to have fun with the science,” he said.