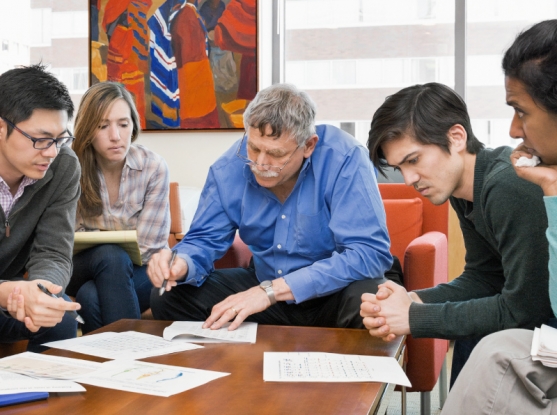 Board of Directors appoints Todd Golub as director of Broad Institute

Eric S. Lander, Founding Director of the Broad Institute of MIT and Harvard, will step down from his leadership role and will take an unpaid, academic leave-of-absence from his faculty positions at Broad, MIT and Harvard to serve as White House Science Advisor to President Joseph R. Biden following the inauguration.

“We are pleased and honored that the President-elect has selected Eric to serve at a time when the country desperately needs to reimagine and reenergize science throughout our nation,” said Louis V. Gerstner, Jr., chair of the Broad Institute Board of Directors. “We look forward to his return to the Broad Institute in the future.”

The Board of Directors has appointed Todd R. Golub, the Broad’s Chief Scientific Officer, as Director of the Broad Institute. Golub is one of the founders of the Broad Institute, is a core institute member, serves on its executive leadership team, and has played a central role in building and leading the institute since before its launch in 2004. He is also the Charles A. Dana Investigator in Human Cancer Genetics at the Dana-Farber Cancer Institute and professor of pediatrics at Harvard Medical School.

“Broad is in a stronger scientific and cultural position today than at any point in our 16-year history,” Golub said. “Moreover, the pandemic has pushed us to think differently about nearly every aspect of how we collaborate and deliver on our scientific mission. We are well-positioned to work with the larger scientific community to confront some of the most urgent challenges in biomedicine: from developing novel diagnostics and therapeutics for infectious diseases and cancer, to understanding the genetic basis of cardiovascular disease and mental illness. I am honored to serve as Director of this remarkable institution.”

Golub joined the Dana-Farber and Harvard faculty in 1997, and served as a key scientific leader of the Whitehead Institute/MIT Center for Genome Research, the precursor organization of the Broad Institute. He has also been an Investigator of the Howard Hughes Medical Institute, and has served as chair of numerous scientific advisory boards, including St. Jude Children’s Research Hospital and the National Cancer Institute’s Board of Scientific Advisors. Golub is also an entrepreneur, having co-founded several successful biotechnology companies developing diagnostic and therapeutic products. Golub is a world leader in creating and applying tools of genomics to understand the basis of disease and developing new approaches to drug discovery. He has made fundamental discoveries in the molecular basis of human cancer, and he has been a major driver of approaches to precision medicine.

“Todd’s deep knowledge of the Broad Institute community, its science, and its mission to propel the understanding and treatment of disease make him the perfect choice for the institute’s next Director,” Gerstner said. “Todd is well-positioned to lead the Institute and our key scientific collaborations forward, and the Board is highly confident he will continue the Broad's culture of innovation, collegiality, and constant renewal.”

“In its 16 years, the Broad has become one of the most unique institutions in the biomedical ecosystem,” said Shirley M. Tilghman, professor of molecular biology and public policy and president emerita of Princeton University, and a member of the Broad Institute Board of Directors. “Under Eric’s and Todd's leadership, it has developed powerful new methods and made many contributions to genomic medicine that will benefit human health. As both an innovator and an inspired scientific leader, Eric is an ideal choice to advise the President on integrating scientific knowledge into sound public policy and empowering the next generation of scientific leadership in this country. At the Broad, Todd will move the institution forward as its new director to continue its innovative spirit and move science forward to benefit human health.”

“Our country stands at the most consequential moment for science and technology since World War II. How we respond will shape our future for the rest of this century,” Lander said. “President-elect Biden understands the central role of science and technology, and I am deeply honored to have the chance to serve the nation.” 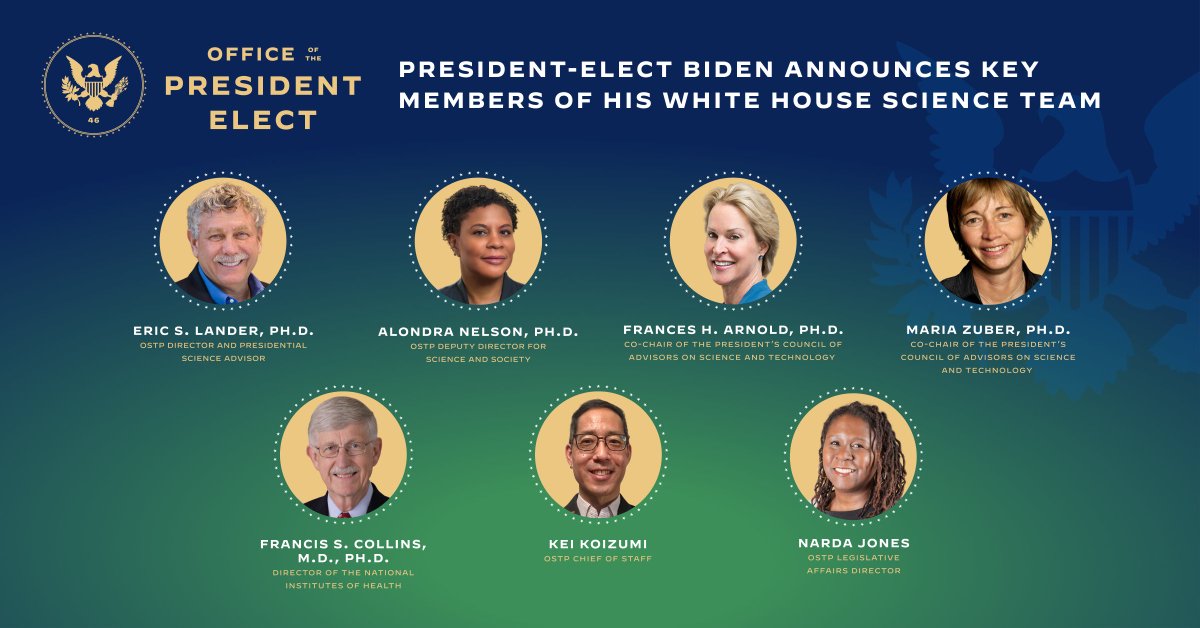 The Science Team, in the Office of Science and Technology Policy (OSTP), will include:

Dr. Alondra Nelson will serve as OSTP Deputy Director for Science and Society. A distinguished scholar of science, technology, social inequality, and race, Dr. Nelson is president of the Social Science Research Council, an independent, nonprofit organization linking social science research to practice and policy. She is also a professor at the Institute for Advanced Study, one of the nation’s most distinguished research institutes, located in Princeton, NJ.

Dr. Frances H. Arnold and Dr. Maria Zuber will serve as the external Co-Chairs of the President’s Council of Advisors on Science and Technology (PCAST). An expert in protein engineering, Dr. Arnold is the first American woman to win the Nobel Prize in Chemistry. Dr. Zuber, an expert in geophysics and planetary science, is the first woman to lead a NASA spacecraft mission and has chaired the National Science Board. They are the first women to serve as co-chairs of PCAST.

Kei Koizumi will serve as OSTP Chief of Staff and is one of the nation’s leading experts on the federal science budget.

Narda Jones, who will serve as Legislative Affairs Director, was Senior Technology Policy Advisor and Counsel for the Democratic staff of the U.S. Senate Committee on Commerce, Science and Transportation.

Broad Institute and Verily partner with Microsoft to accelerate the next generation of the Terra platform for health and life science research
Research Roundup: January 15, 2021