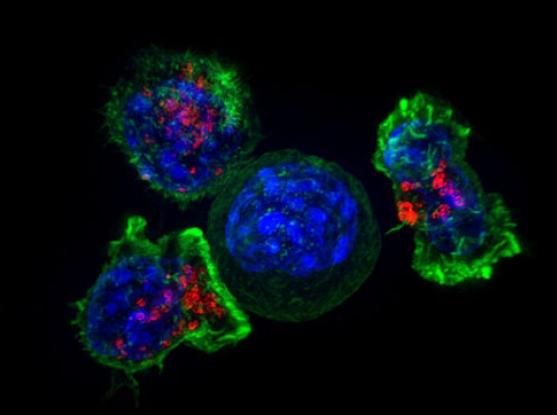 Challenge participants will propose genetic changes to T cells that could make them better at killing cancer cells. The most promising submissions will be tested out in the lab.

The immune system is adept at fighting off viral and bacterial infections, but it can also find and attack cancer in the body. Cancer cells, however, are skilled at disarming the immune system’s T cells — allowing tumors to continue growing unabated.

Scientists at the Broad Institute of MIT and Harvard and beyond have been looking for ways to genetically modify T cells to improve their cancer-fighting ability. Now the Eric and Wendy Schmidt Center at the Broad Institute is joining this effort, by holding a data science challenge this winter that will call on machine learning enthusiasts to develop algorithms that identify effective genetic modifications in T cells.

Winners will receive monetary prizes at each stage — and, unlike in most data science challenges, the top-scoring participants will have their submissions experimentally validated. Members of a cancer immunology lab at Broad led by institute member Nir Hacohen will make the top-ranked genetic modifications in T cells in the lab and assess the cells’ cancer-fighting abilities.

The “Cancer Immunotherapy Data Science Challenge: Reprogramming T Cells to Combat Tumors” was announced earlier this month at the online coding tournament Topcoder Open, and will run from January 9 to February 3, 2023. The Eric and Wendy Schmidt Center is partnering with Harvard’s Laboratory for Innovation Science, the MIT Department of Electrical Engineering and Computer Science, Topcoder, and Massachusetts General Hospital (MGH) to run the challenge.

“Machine learning experts have largely gone into the fields of big technology and finance. With this challenge, we’re describing an important problem in cancer immunology in a way that is approachable for computational minds — thus hoping to entice more of these experts to the life sciences,” said Caroline Uhler, co-director of the Eric and Wendy Schmidt Center, a core member of the Broad Institute, and professor in the Department of Electrical Engineering and Computer Science and the Institute for Data, Systems and Society at MIT.

Cancer immunotherapies boost the immune system to fight off cancer in a variety of ways. Scientists have made many breakthroughs in cancer immunotherapy in the last decade, such as the development of several FDA-approved checkpoint blockade and “CAR T” therapies. CAR T treatments involve removing T cells from a cancer patient, genetically engineering them in the lab to target tumors, and then reintroducing them back into the patient. However, these treatments work for only a small number of cancer types and only in some patients.

To make T cell-based immunotherapies more effective for more patients, scientists are looking for other genetic changes they can introduce in T cells to make them better cancer killers. With the development of genome-editing technologies such as CRISPR in the last decade, researchers can look for those desirable changes by performing large-scale genetic screens to systematically modify or knock out each gene and study the effect of these “perturbations” at the single-cell level.

However, perturbing each of the 20,000 genes in the cell or the several hundred million different combinations of genes in the lab would be too costly and time-consuming. Machine learning can help, by predicting which genetic perturbations might be most effective.

“We hope that this challenge will allow us to quickly hone in on the most promising perturbations so we can better target our experimental validation,” said Hacohen, director of the Broad Institute’s Cell Circuits Program, institute member of the Broad Institute, and director of MGH’s Center for Cancer Immunology. “The predictions from this challenge will provide a crucial step toward making cancer immunotherapy more effective for more patients.”

The Cancer Immunotherapy Data Science Challenge will consist of three parts that will run at the same time. In the first part, participants will use transcriptomic and perturbational data from T cells in mouse tumors to develop algorithms that predict the effect of perturbations that have already been studied in the lab, allowing them to see how well their algorithms work. In part two, they’ll come up with a metric for ranking how well a particular gene knockout would shift T cells to a desired state.

And, third, participants will use their algorithms to propose perturbations that boost T cells’ ability to destroy tumors. The top-scoring participants from part one will have their proposed perturbations experimentally validated.

“Data science challenges like this one draw on the power of the crowd to bring in outside computational and creative machine learning techniques to solve biological problems,” said MarcAntonio Awada, head of research and data science at Harvard’s Institute for Digital, Data, and Design Institute. “In the past, crowdsourcing has led to out-of-the-box approaches and completely novel solutions compared to what experts had come up with.”

The challenge will run concurrently with an Independent Activities Period course at MIT, which brings together computer science and biology students to collaborate on this problem. “The course provides a great opportunity for MIT students to apply their education and see that what they’re learning in the classroom has a direct impact on answering critical biomedical questions,” said Uhler, who is one of the course’s instructors.

A biology background isn’t necessary to participate. The Eric and Wendy Schmidt Center will provide all challenge participants with an online crash course on cancer immunology and unique features of the large-scale datasets. Interested participants can pre-register now as an individual or as part of a team on Topcoder, which is hosting the challenge on their platform.

Participants will have free access to Terra — a cloud platform for biomedical research co-developed by the Broad Institute, Microsoft, and Verily — to complete the challenge.