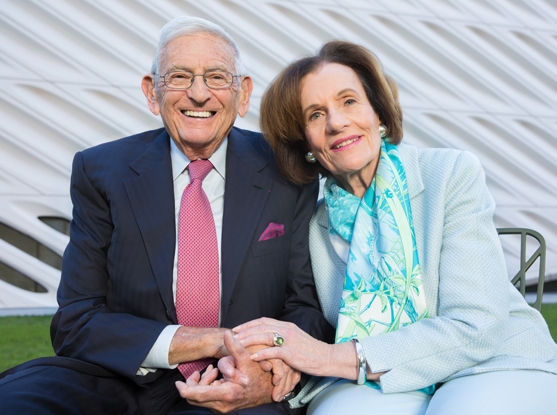 Eli Broad, visionary philanthropist and founder of the Broad Institute, died on April 30, 2021 in Los Angeles. He was 87.

A renowned entrepreneur and the only person to have built two Fortune 500 companies in different industries, Broad was one of the most influential philanthropists in recent decades.

Together with his wife of more than 65 years, Edythe, Eli reinvigorated downtown Los Angeles, championed contemporary art, invested in education, and transformed biomedical research. Their distinguished charitable legacy includes the Broad Museum of Contemporary Art, the Broad Institute of MIT and Harvard, endowed programs at UCLA, Caltech and Michigan State University, and The Broad Center at the Yale School of Management, consequently touching the lives of millions.

“Those who have been blessed with extraordinary wealth have an opportunity, some would say a responsibility—we consider it a privilege—to give back to their communities, be they local, national or global,” Broad wrote in a letter announcing his participation in the Giving Pledge, the 2010 agreement by some of America’s wealthiest families to donate at least half of their wealth to charity. As two of the first signatories of the pledge, the Broads promised to contribute 75 percent of their net worth. 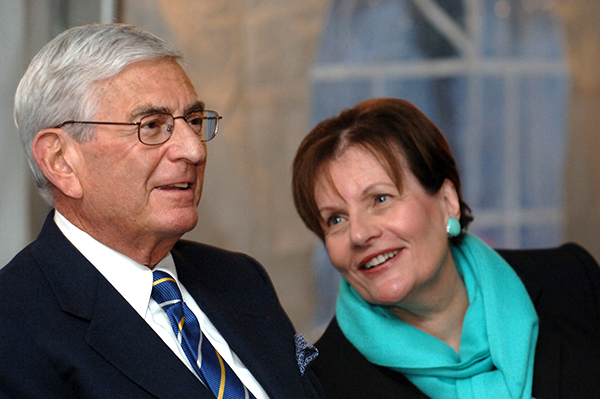 Eli and Edye Broad visited the then-new Broad Institute in 2005.

Broad took a hands-on approach to philanthropy, applying the same analytical rigor he brought to his years in the business world. He sought out new ideas and opportunities, viewed his contributions as investments and expected accountability and a measurable impact in return. He built a reputation for betting big—identifying areas where he believed systemic change was both needed and possible, and then investing heavily to create maximum impact. In cases where the necessary organizational structures and facilities were lacking, he created them from scratch.

“The money we’re working with—all of it earmarked to do good and all of it growing through investments—is precious,” he wrote in his 2012 book, The Art of Being Unreasonable: Lessons in Unconventional Thinking. “In a sense, instead of shareholders, we work for future generations who stand to benefit from the change we can create. That’s a constituency we can’t afford to disappoint.”

A successful career in business

Eli Broad was born June 6, 1933 in the Bronx, the only child of Lithuanian Jewish immigrants. In 1939, the family relocated to Detroit where his father had taken a job as a union organizer. He attended the Detroit public schools, graduating from Detroit Central High School in 1951. As a student, his inquisitive, skeptical nature earned him a reputation for being argumentative. Frustrated with school, he funneled his energy into a string of jobs that included selling women’s shoes, selling garbage disposals door-to-door, and working as a drill press operator at an automotive plant.

That same year he married his sweetheart, Edythe ‘Edye’ Lawson. Broad often referred to Edye as his ‘Chief Inspiration Officer.’ The couple developed a passion for collecting art and a shared sense of moral obligation to help others. They had two sons, Jeffrey and Gary.

In 1956, Broad started his own accounting firm in a small office he shared with Edye’s cousin’s husband—a local homebuilder named Donald Kaufman. Detroit was at the height of its post-war boom, and sensing an opportunity, the two soon agreed to partner in a homebuilding venture. With the help of a $12,500 loan from his in-laws, Broad financed the company’s first undertaking—two model homes in Detroit.

By implementing a series of cost-cutting measures, such as eliminating basements and building carports in lieu of garages, Kaufman and Broad were able to offer homes at a price well below the average rent for a two-bedroom apartment. Their innovative approach appealed to first-time, middle-income buyers and the Kaufman and Broad Homebuilding Corporation was an immediate success.

In 1960, the pair decided to move the company, now known as KB Home, to another fast-growing market—Phoenix, Arizona. The company would expand again in 1963—this time to Los Angeles, where the Broads would settle permanently. In 1969, KB Home became the first homebuilding company listed on the New York Stock Exchange.

In 1971, Broad acquired the Baltimore-based Sun Life Insurance Company. After a few years of modest growth, he recognized that the small, regional company would never be able to compete against the larger, consolidated insurers in the industry. He decided to shift the company’s focus from life insurance to marketing retirement savings to baby boomers. SunAmerica would become the best-performing company on the New York Stock Exchange for a decade. In 1999, AIG purchased SunAmerica for $18 billion.

A pivot to philanthropy

Following the merger with AIG, Broad stepped down as CEO to begin what he termed his “fourth career” as a full-time philanthropist. His parents, who devoted their free time to community and religious organizations, had taught him the value of giving back.

“Philanthropy isn’t just a pursuit for the wealthy,” he wrote. “Philanthropy is about involvement. Pick your issue, work at it, and do your best to make things happen.”

The Broads’ made their first significant gift in 1971 when they donated $10 million to Pitzer College. Indeed, education would become a primary focus for the Broads, who later made major contributions to a number of colleges and universities, including endowed programs at UCLA, Caltech, and Michigan State University. They sponsored many efforts to reform public education, including charter models, blended-learning initiatives, and talent development programs for administrators. In 2019, the Broads donated $100 million to launch The Broad Center at the Yale School of Management to strengthen leadership in America’s public schools.

Beginning in the early 1970s, the couple started collecting art. Their first purchases included a Van Gogh, a Miro, and a Matisse, but they soon developed a taste for contemporary art. By the 1980s, the couple had amassed a vast collection that included works by Chuck Close, Jeff Koons, Jasper Johns, Barbara Kruger, and Cindy Sherman.

As the collection grew, the Broads established The Broad Art Foundation to make their collection accessible to museums and other public institutions. The foundation has since made more than 8,500 loans to over 500 museums and galleries around the world.

The Broads’ passion for the arts played a key role in the cultural revitalization of Los Angeles. In the mid-1990s, Eli stepped in to rescue the Walt Disney Concert Hall project. He was also an early backer of the Museum of Contemporary Art and the Ramon Cortines School of Visual and Performing Arts. In 2015, the Broads capped off their 20-year campaign to revitalize downtown L.A. with the opening of The Broad, a gleaming 120,000-square-foot museum housing their vast personal collection of contemporary art.

Broad’s foray into biomedicine was unexpected. In the 1990s, one of Broad’s sons was diagnosed with a debilitating form of inflammatory bowel disease. Frustrated by the lack of effective treatments and understanding, Broad launched a grant program designed to fund innovative and early-stage research in inflammatory bowel disease.  In 2002, during a trip to Cambridge, Mass., he visited the lab of Eric Lander, one of the grant recipients.

Lander, a mathematician and geneticist, was one of the leaders of the Human Genome Project, which at the time was nearing completion. During their meeting, Lander shared his vision for his next project: a new kind of scientific institute that would unite Harvard University and MIT to apply the emerging field of genomics to advance the understanding and treatment of human disease. Broad recognized the potential in Lander’s vision but balked at the estimated cost of $800 million. The idea, however, struck a chord, and after more thought—and a nudge from Edye—he agreed to provide $100 million as an impetus to bring Harvard University and MIT to the negotiating table. 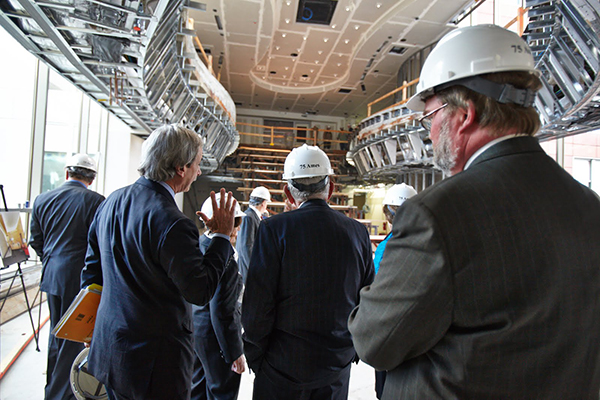 The Eli and Edythe Broad Institute of MIT and Harvard officially opened its doors in 2004. Since then, the Broad Institute has established itself as a global leader in biomedicine, contributing breakthrough discoveries in diseases ranging from cancer to psychiatric disease; pioneering new fields of study; and developing transformative scientific methods and resources.

At the time of his death, Eli Broad had contributed more than $5 billion to support K-12 public education, scientific and medical research and the arts—including more than one billion dollars to the Broad Institute.