Eli and Edythe L. Broad announce $400 million endowment for the Broad Institute of Harvard and MIT 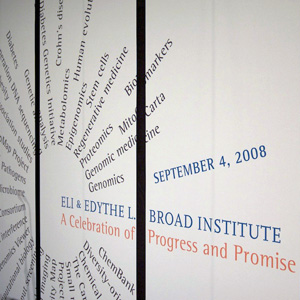 Less than five years into a ten-year groundbreaking experiment in philanthropy and science, the results are in. The Broad Institute of Harvard and MIT, which was founded in 2003 and launched in 2004 to test how effective venture philanthropy and inter-institutional collaboration could be in propelling biomedical progress, has been declared a resounding success, and will now become a permanent, standalone institution within the biomedical landscape.

At today’s celebration of its anniversary, the Broad Institute of Harvard and MIT received an unprecedented $400 million gift from its philanthropic founding partners Eli and Edythe L. Broad: an endowment intended to establish the Institute as a permanent biomedical research organization. The Broads announced their gift this morning at a ceremony featuring speeches by Governor Deval Patrick of Massachusetts, MIT President Susan Hockfield, Harvard President Drew Gilpin Faust, Nobel Laureate David Baltimore of Caltech, and Broad Institute director Eric Lander.

“Today the Broad Institute is the world’s leading genomics and biomedical institute, and we’re now making a $600 million bet that the Broad will be the place where the greatest scientific discoveries take place,” Eli Broad said at today’s ceremony.

In his speech, Patrick praised the Broads’ forethought and generosity, expressing the gratitude of the people of Massachusetts and beyond. “What you have done through this endowment is given hope for new medical breakthroughs to all kinds of people you have never even met,” Patrick said. “Your investment is a profound act of generosity and a wonderful model. I am proud as governor that the Commonwealth can play a modest role in partnering with all of you to lift this industry up. Thank you for the model and example that you offer.”

Baltimore described the model for scientific research that the Broads’ philanthropy helped create and will sustain. “Eli and Edythe Broad have transmuted the institute from successful experiment to an institution for the future. They have done what they do best: taken a chance, funded an experiment, recognized success, and only then, guaranteed longevity,” Baltimore said. “They are the premiere entrepreneurs of academic research, investing their resources and their time in a new idea. The Broad Institute is truly a new institutional form that enriches the already powerful enterprises that exist.”

The unparalleled endowment gift brings the Broads’ total commitment to $600 million. The gift is a testament to the success of the institute’s new model of research collaboration that spans the entire MIT and Harvard communities, including the 17 Harvard-affiliated teaching hospitals. This model of collaboration aims to accelerate the pace of scientific progress and make data and tools rapidly and freely available. In its short history, the Broad Institute’s accomplishments include cataloging and identifying genetic risk factors for diseases such as type 2 diabetes and autism; discovering new therapeutic targets for cancer, malaria, and other diseases; and applying genomic tools to better understand and treat human pathogens like tuberculosis.

Hundreds of Broad employees and guests gathered at the Broad Institute’s 7 Cambridge Center building to honor Eli and Edythe Broad at this morning’s ceremony. Before the Broads’ announcement, Lander introduced a seven-minute long tribute video in which Broad employees described what the institute has meant to them and to the fields of genomics and medicine and thanked the Broads for their generosity. Special guest stars –including former President Bill Clinton, Boston’s Mayor Thomas Menino, and Senator John Kerry – also made video appearances.

Following the video, Eli Broad addressed the Broad community about the future of the Institute. “Over my lifetime I’ve made a lot of different investments, and our investment in the Broad Institute is the largest philanthropic investment we’ve made,” he said. “It has without question yielded the greatest returns. Our goal in creating an endowment is to make permanent the Broad Institute, to make certain the work will continue. We want to congratulate you on the work you are doing, but we also want to encourage you on the work you are about to do.”

The Broads’ gift is the largest to support biomedical research at a university anywhere in the world. The Broads initially invested $100 million in 2003 as a way to test the institute’s new approach to biomedical research. By 2005, the Broad Institute had already made significant accomplishments and progress, and the Broads invested a second $100 million. Their endowment of $400 million today will allow the Broad Institute to transition to a permanent, non-profit 501(c)(3) organization with both Harvard and MIT still at the heart of it, continuing to help govern the institute.

Both Hockfield and Faust praised the Broad Institute’s achievements and noted that their respective institutions look forward to continued collaboration.

“Today, we take together the next logical step,” said Hockfield. “And MIT is fully committed to fostering the Broad Institute as it becomes a permanent feature of the biomedical landscape. We’re opening a door to increasingly fruitful partnerships.”

Lander thanked the Broads on behalf of the Broad community, and on behalf of Bill Gates, Senator Barack Obama, and Senator Ted Kennedy who could not be in attendance.

Lander described the changing field of biomedicine and the success of the Broads’ experiment. “Every good experiment leads to the need for more experiments,” he said. “What we really want to know is not whether we can create a successful institute, but whether we, as a community and as a world, can transform human health. That answer will take decades. With Eli and Edythe’s gift of a permanent endowment, we can focus on this goal. Five years ago, you gave us room to experiment. Today you give us room to fly.”

Listen to an audio recording
of the event

View a photo from the event
(Credit: Len Rubenstein)