In dogs, a shortcut to mapping disease genes 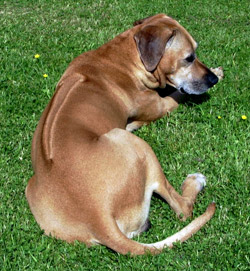 Nearly two years ago, Broad Institute researchers and their colleagues announced they had successfully decoded the genome of the domestic dog, a species coaxed into hundreds of distinct types through selective breeding by humans over the past two centuries. The research team also created a genome-wide catalog of about 2.5 million specific genetic differences — known as single-nucleotide polymorphisms, or SNPs — across various dog breeds. Now, an international team of researchers led by Broad scientists has applied those initial results to develop a tool for efficiently mapping disease genes in dogs. The tool, described in the September 30 advance online edition of Nature Genetics, may also help quicken the pace of efforts to understand the molecular basis of human diseases.

“Dogs are a unique species, domesticated and bred by humans who selected for traits like shape, size, color, and personality,” said Kerstin Lindblad-Toh, senior author of the new study, co-director of the Broad Institute’s Genome Sequencing and Analysis Program, and guest professor at the Department of Medical Biochemistry and Microbiology at Uppsala University in Sweden. “In addition to conserving desired traits, the selective breeding of dogs may make rare disease mutations common in a breed.”

While dogs and humans often share the same living spaces, they are also susceptible to many of the same illnesses, including cancer, epilepsy, and diabetes. And since the two species share much of their DNA, efforts to pinpoint the genetic underpinnings of dog diseases have the potential to deepen the knowledge of diseases in humans.

In dogs, it is well known that certain diseases tend to occur at higher rates within specific breeds. That is because, in the course of breeding, disease-associated genes have been inherited along with the genes for desirable traits. The recent sequencing of the dog genome revealed another consequence of selective breeding — a unique genome structure, characterized by chunks of DNA, called haplotypes, that are roughly 100 times larger than those found in the human genome.

This remarkable structure, with long stretches of DNA shared between dogs within one breed and shorter stretches common among dogs of different breeds, provides the researchers with a critical shortcut. The structure allows them to investigate canine diseases by using relatively few genetic markers and by analyzing fewer dogs. “Our new mapping methods take advantage of the power of reduced genetic diversity in dog breeds and the sharing of mutations across breeds to identify disease genes,” said Elinor Karlsson, first author of the new study and a graduate student in the Broad’s Genome Biology Program. “We use a two-stage approach to first find the approximate neighborhood of the causative mutation, and then we zoom in on its specific location on the genome,” added Karlsson, who collaborated on the project with co-author Claire Wade, senior research scientist in the Center for Human Genetic Research at Massachusetts General Hospital and a Broad researcher.

To aid their search for candidate disease genes in dogs, Karlsson, Wade, and Lindblad-Toh worked with Affymetrix to develop a microarray that recognizes approximately 27,000 of the 2.5 million identified SNPs in the dog genome. With support from the Broad’s Genetic Analysis Platform, the array enabled the researchers to identify the underlying genes for two traits: white coat color in boxers and the inverted ridge of hair growth in Rhodesian ridgebacks. In addition to showing a simple pattern of inheritance, suggesting that one gene or genomic region is responsible, the coat color and ridgeback traits are easily observed in dogs, making them ideal for testing the two-stage mapping strategy.

In the first stage of mapping the coat color trait, the researchers analyzed ten white and nine solid boxers using the microarray to pinpoint SNPs associated with white coat color. The highest-ranking SNP from their analysis resides in a section of the dog genome that contains one gene, called MITF, an important developmental gene associated with both pigment and auditory disorders in humans and mice. To more precisely characterize the color-controlling gene and identify the mutation(s) in white dogs, the study was expanded in the second stage to a larger sample of dogs, including both boxers and bull terriers, which also carry the white coat color trait. As a result, the team localized the causative mutation to an area of the dog genome that regulates the activity of the MITF gene. 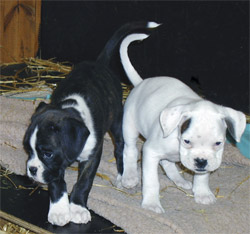 Taking the same initial approach to map the hair ridge trait in Rhodesian ridgebacks, the scientists identified a segment of DNA that was found in all of the 12 ridged dogs, but in none of the 9 ridgebacks lacking a ridge. The region includes three fibroblast growth factor (FGF) genes that play crucial roles in development. Further analysis revealed the precise genetic cause of ridges in the dogs — the region containing the three FGF genes is abnormally duplicated, such that the three genes are present in excess copies.

A key advantage of trait mapping in dogs is that fewer individuals are needed for analysis compared to similar genome-wide studies in humans. After validating their approach on so-called Mendelian traits, which are controlled by a single gene or genomic region, Lindblad-Toh and her colleagues are now turning their attention to complex diseases. These diseases, such as cancers and autoimmune disease, involve multiple genetic and environmental causes. Importantly, many of the diseases are found not just in dogs, but in humans, too. Because of the unique genome of purebred dogs, the researchers may only need to test the DNA of a few hundred animals to characterize complex diseases, compared to the thousands of subjects that are required to study these diseases in humans.

An ongoing challenge in the effort is to collect blood samples from dogs of various breeds, including both healthy and sick animals. Since all blood samples used in this research come from pet dogs, both dogs and their owners are essential collaborators in continuing the research. At the website, www.dogDNA.org, the dog owner community can learn more about the types of samples that are most needed and how to participate.

Dog disease research at the Broad

Broad news story: In divergence from wolves, doggie diet made a difference (2012)