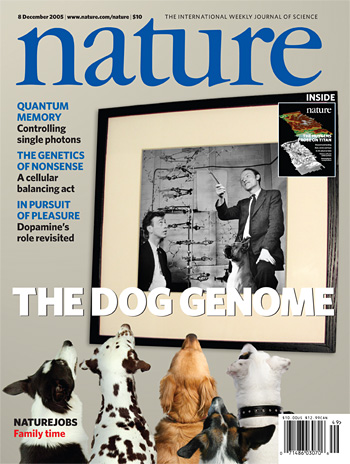 An international research team led by scientists at the Broad Institute of MIT and Harvard announced today the completion of a high-quality genome sequence of the domestic dog, together with a catalog of 2.5 million specific genetic differences across several dog breeds. Published in the December 8 issue of Nature, the dog research sheds light on both the genetic similarities between dogs and humans and the genetic differences between dog breeds. Comparison of the dog and human DNA reveals key secrets about the regulation of the master genes that control embryonic development. Comparison among dogs also reveals the structure of genetic variation among breeds, which can now be used to unlock the basis of physical and behavioral differences, as well the genetic underpinnings of diseases common to domestic dogs and their human companions.

"Of the more than 5,500 mammals living today, dogs are arguably the most remarkable," said senior author Eric Lander, director of the Broad Institute, professor of biology at MIT and systems biology at Harvard Medical School, and a member of the Whitehead Institute for Biomedical Research. "The incredible physical and behavioral diversity of dogs — from Chihuahuas to Great Danes — is encoded in their genomes. It can uniquely help us understand embryonic development, neurobiology, human disease and the basis of evolution."

Dogs not only occupy a special place in human hearts, they also sit at a key branch point in the evolutionary tree relative to humans. By tracking evolution's genetic footprints through the dog, human and mouse genomes, the scientists found that humans share more of their ancestral DNA with dogs than with mice, confirming the utility of dog genetics for understanding human disease.

Most importantly, the comparison revealed the regions of the human genome that are most highly preserved across mammals. Roughly 5% of the human genome has been well preserved by evolution over the past 100 million years and must encode important biological functions. The researchers discovered that the most highly conserved of these sequences are not randomly distributed throughout the genome. Instead, they are crowded around just a tiny fraction (about 1%) of the genes that encode crucial regulatory proteins involved in development (such as transcription factors or axon guidance receptors). "The clustering of regulatory sequences is incredibly interesting," said Kerstin Lindblad-Toh, first author of the Nature paper and co-director of the Genome Sequencing and Analysis Program at the Broad. "It means that a small subset of crucial human genes is under much more elaborate control than we had ever imagined."

Dogs were domesticated from gray wolves as long as 100,000 years ago, but selective breeding over the past few centuries has made modern dog breeds a testament to biological diversity. Obvious examples include the contrasting body sizes of 6-pound Chihuahuas and 120-pound Great Danes, the hyperactivity of Jack Russell terriers relative to mild-mannered basset hounds, and the herding instincts of Shetland sheepdogs compared with the protective proclivity of dalmatians.

Efforts to create the genetic tools needed to map important genes in dogs have gained momentum over the last 15 years, and already include a partial survey of the poodle genome. More than two years ago, Lindblad-Toh, Lander, and their colleagues embarked on a two-part project to assemble a complete map of the dog genome. First, they acquired high-quality DNA sequence from a female boxer named "Tasha," covering nearly 99% of the dog's genome. Using this information as a genetic "compass," they then sampled the genomes of 10 different dog breeds and other related canine species, including the gray wolf and coyote. By comparing these dogs, they pinpointed ~2.5 million individual genetic differences among breeds, called single nucleotide polymorphisms (SNPs), which serve as recognizable signposts that can be used to locate the genetic contributions to physical and behavioral traits, as well as disease.

Finally, the scientists used the SNP map to reconstruct how intense dog breeding has shaped the genome. They discovered that selective breeding carried large genomic regions of several million bases of DNA into breeds, creating "haplotype blocks" that are ~100 times larger than seen in the human population. "The huge genomic regions should make it much easier to find the genes responsible for differences in body size, behavior and disease," said Lander. "Such studies will need many fewer markers than for human studies. It should be like hitting the side of a barn."

Breeding programs not only selected for desired traits, they also had the unintended consequence of predisposing many dog breeds to genetic diseases, including heart disease, cancer, blindness, cataracts, epilepsy, hip dysplasia and deafness. With the dog genome sequence and the SNP map, scientists around the world now have the tools to identify these disease genes.

Humans suffer from many of the same illnesses as their four-legged friends and even show similar symptoms, but the genetic underpinnings have proved difficult to trace. "The genetic contributions to many common diseases appear to be easier to uncover in dogs," said Lindblad-Toh. "If so, it is a significant step forward in understanding the roots of genetic disease in both dogs and humans."

For this work, the dog-owner community is an essential collaborator. "We deeply appreciate the generous cooperation of individual dog owners and breeders, breed clubs and veterinary schools in providing blood samples for genetic analysis and disease gene mapping," said Lindblad-Toh. "Without their interest and help we could not be doing this work."

Sequencing of the dog genome began in June 2003, funded in large part by the National Human Genome Research Institute (NHGRI). The Broad Institute is part of NHGRI's Large-Scale Sequencing Research Network. NHGRI is one of 27 institutes and centers at the National Institutes of Health (NIH), an agency of the Department of Health and Human Services. The NHGRI Division of Extramural Research supports grants for research and for training and career development at sites nationwide. Information about NHGRI, including the dog genome initiative, can be found at: www.genome.gov.

In alignment with the mission of both NHGRI and the Broad Institute, all of these data can be accessed through the following public databases:—for the boxer genome sequence: www.ncbi.nlm.nih.gov, www.ensembl.org, genome.ucsc.edu—for the SNPs: www.ncbi.nlm.nih.gov/projects/SNP/

They can also be viewed at the Broad Institute website (www.broad.mit.edu).

A complete list of the study's authors and their affiliations:

A high-resolution photo of Tasha, the boxer from which the DNA for sequencing the dog genome was taken, is available at: www.genome.gov/11007323.

The Bay Colony Cluster Dog Show – a series of four shows presented by several prestigious Boston area American Kennel Club (AKC) clubs, with an average of 3,000 pedigree pooches competing each day for Best In Show honors and AKC titles – will be setting up for their show which begins on Thurs., Dec. 8, 2005. Immediately following the press conference, handlers and dogs will be available for photo opportunities.

Directions: From the north take exit 15 and from the south take exit 14 off the Southeast Expressway (I-93) follow signs to Expo Center. On-site parking is $3.00 for commuters. A complimentary trolley ride from the MBTA JFK/UMASS stops at Bayside.URL: http://www.baysideexpo.com

Listen to the press conference