Deepening the search for clues to rheumatoid arthritis 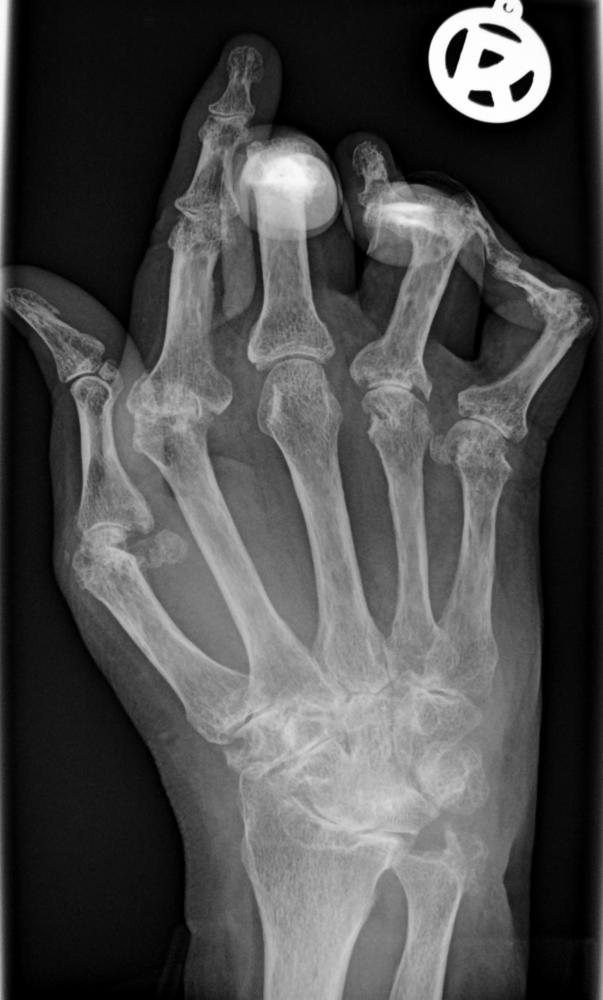 The gnawing pain of rheumatoid arthritis is a signal that the body’s immune system has hit the wrong target: its own cartilage and bone.

The disease, which affects about 1% of the adult population worldwide, has no clear root cause, and for many patients, the available therapies are not effective.

For reasons that science has yet to fully understand, cells that normally destroy foreign invaders like bacteria turn on the body itself, causing inflammatory arthritis and eroding the delicate machinery that keeps joints supple. But the body also holds tantalizing clues, nestled in the DNA of each cell. In the 1970s, researchers found the first genetic risk factor for rheumatoid arthritis. A second risk factor was identified in 2003, and genome-wide studies have found a variety of others since then.

Now, scientists and clinicians at the Broad Institute of MIT and Harvard, and Brigham and Women’s Hospital, working with an international team, have widened the hunt, finding three new genetic risk factors for the disease. They also identified four more that look like promising targets for further research. Their work was published online November 8 in the journal Nature Genetics.

The researchers brought a powerful weapon to the hunt: A computer program called GRAIL allowed them to quickly comb through nearly three decades’ worth of scientific literature on PubMed, a free digital archive maintained by the National Institutes of Health since the 1960s.

Much like Google, GRAIL harnesses the power of computer algorithms to sift through a vast array of text – in this case, the program analyzed 250,000 published abstracts, or summaries, of studies on genes in humans and in other organisms such as the mouse.

"With GRAIL, you can take a list of genes and use the wealth of published literature and mine it for a common thread," said Soumya Raychaudhuri, a postdoctoral researcher at the Broad Institute who developed the program and who is first author of the paper. "GRAIL is fast and objective. There are 20,000 genes in the human genome, and none of us is an expert on all 20,000. GRAIL helps you parse the list really quickly and come up with promising candidates that you can then focus your attention on. It’s a way to focus one’s intellectual resources."

Hardier than any pair of human eyes, GRAIL, which is short for Gene Relationships Across Implicated Loci, scans study abstracts for references to regions of the genome suspected to play a role in rheumatoid arthritis and compares these with previously confirmed risk factors. The short list of new candidates can then be confirmed in laboratory studies.

Raychaudhuri and his colleagues used GRAIL to examine studies that uncovered single "letter" variations in the genome, known as single-nucleotide polymorphisms, or SNPs, from 179 regions of the genome thought to influence risk.. GRAIL gave each region a score, based on its relationships to genes in 16 regions that are already known to be associated with rheumatoid arthritis.

Twenty-two of these SNPs looked promising, so the scientists examined them in samples from thousands of patients with and without rheumatoid arthritis. Of the 22, the analysis found three new risk factors for rheumatoid arthritis, and four more that look like promising targets for further research. Many of these variants are in or near regions of the genome already associated with autoimmune diseases, such as lupus erythematosus, celiac disease, and type 1 diabetes.

"These SNP associations continue to clarify critical biological processes involved in RA pathogenesis," the authors wrote, including the deployment of the immune system’s most important "soldiers," T-cells and B-cells.

"It really helped us take a long list of potential genetic variants and focus in on a small number of them … to see if these are true rheumatoid arthritis risk alleles, or not," said Robert Plenge, assistant professor at Harvard Medical School and director of genetics and genomics in the Division of Rheumatology, Immunology and Allergy at Brigham and Women's Hospital. "It allowed us to disregard a lot of things that we didn’t think would be important and to focus on those that had a higher chance of being important," said Plenge, one of the paper’s co-authors.

Although the scientists note that GRAIL is limited because it relies on the descriptions in already published literature, they hope it will help define the biological pathways involved in rheumatoid arthritis.

"One of the big challenges for technologies like GRAIL is to get it to move beyond the abstracts and get to the full text. That’s one of my longterm goals," Raychaudhuri said. "But the hope of all of this is that it will help us figure out what the key pathways are that seem to predispose people to disease,"he said. "And hopefully with that, we’ll be able to identify drugs that are effective."

Horse genome sequence and analysis published in Science
The next frontier of modern science: the "undruggable"