Deep views of how the genome folds 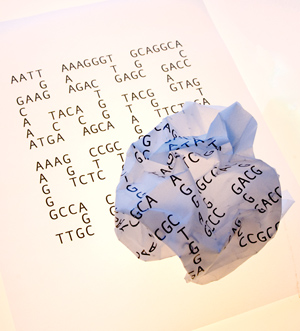 Imagine a piece of string as long as Michael Jordan is tall. Now imagine balling it up in such a way that it can fit on the head of pin — and be unraveled, knot-free, at a moment's notice. Not a trivial task, for sure.

As far-fetched as that sounds, a similar engineering feat is at work right now inside your body, where cells cope with a genome that not only extends for over two meters, but also must be carefully packed into the confines of a space (called the "nucleus") several times narrower than a human hair. Now, a research team led by Boston-area scientists has devised a powerful new approach to reconstruct the three-dimensional structure of the human genome, revealing key insights into the folding principles that enable DNA to be packed in a way that is optimally dense yet maximally accessible. Their findings appear in the October 10 issue of the journal Science.

"We've long known that on a small scale, DNA is a double helix," said co-first author Erez Lieberman-Aiden, a graduate student in the laboratory of Broad Institute director Eric Lander, the Harvard-MIT Division of Health Science and Technology and Harvard's School of Engineering and Applied Sciences. "But if the double helix didn't fold further, the genome in each cell would be two meters long. Scientists have not really understood how the double helix folds to fit into the nucleus of a human cell, which is only about a hundredth of a millimeter in diameter. This new approach enabled us to probe exactly that question."

Lieberman-Aiden and his colleagues, including senior co-author Job Dekker and co-first Nynke van Berkum, both of the University of Massachusetts Medical School, unearthed two key findings. First, they discovered an unusual compartmental structure to DNA within the nucleus: active genes tend to localize to one area and inactive ones to another. Moreover, genomic regions appear to flow in and out of these two nuclear compartments as the genes within them are turned on or off.

"Cells cleverly separate the most active genes into their own special neighborhood, to make it easier for proteins and other regulators to reach them," said Dekker, an associate professor of biochemistry and molecular pharmacology at UMass Medical School.

The other remarkable result involves the finer-scale organization that the genome takes on inside nucleus. By folding into what is known as a "fractal globule," DNA condenses into an exceedingly dense structure, entirely devoid of knots, that can easily unfold and refold as needed.  Scientists previously suspected that stretches of the genome were likely to adopt a so-called "equilibrium globule," a dense conformation that is also very highly knotted. But such knots would hinder access to the genetic code.

The researchers' discoveries flow from their use of a new method known as "Hi-C," which harnesses next-generation DNA sequencing technologies to determine which parts of the genome are in close proximity. It is well known that DNA elements separated by vast genomic distances can - and do - interact with each other, but it has only recently become possible to map these interactions on a genome-wide scale.

"By breaking the genome into millions of pieces, we created a spatial map showing how close different parts are to one another," said van Berkum, a postdoctoral researcher at UMass Medical School in Dekker's laboratory. "We made a fantastic three-dimensional jigsaw puzzle and then, with a computer, solved the puzzle."

The solution to this puzzle, though, is only a first step. In the future, the researchers hope to enhance their three-dimensional views of the genome using higher resolution techniques, something that requires even deeper DNA sequencing capabilities. Given the rapid evolution of sequencing technologies, higher resolution studies are likely to become feasible in the not-too-distant future.

Read the press release from Harvard, MIT, UMass and Broad