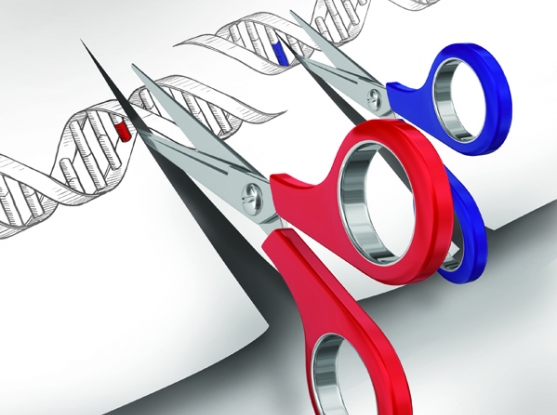 For decades, researchers have sought a biological toolset capable of precisely and systematically turning off genes throughout the genomes of human cells. The CRISPR-Cas9 system – a recently discovered system with bacterial origins – has the potential to overcome many of the limitations of currently available gene-silencing techniques. Earlier this year, several research groups showed that it was possible to use CRISPR-Cas9 to turn off genes in mammalian cells.

But in order to investigate and better understand the genetics of health and disease, scientists need a toolset that can reliably turn off each of the genes in the genome on a large scale.

In companion papers published together this week in Science, researchers from the Broad Institute, Whitehead Institute, McGovern Institute for Brain Research, and elsewhere have scaled up, demonstrating the capabilities of the CRISPR-Cas9 system in large-scale studies of several types of human cells, turning off genes accurately and efficiently at a genomic scale instead of just one or a few genes at a time. The two papers – which offer up libraries of tens of thousands of complexes tailored to match precise locations throughout the genome – lay the groundwork for a range of future studies, including investigations into neural development, cancer, and many other human diseases.

“We can now use this technology on a genome-wide scale, giving us the ability to interrogate any gene we want,” said Feng Zhang, a core member of the Broad Institute, an investigator at the McGovern Institute, and an assistant professor at MIT. Zhang is also the senior author of one of the Science papers. “Additionally, we demonstrate the utility of CRISPR for making biological discoveries, identifying new genes likely involved in how cancer cells become resistant to treatment. This is likely the first biological discovery made using CRISPR.”

Unlike other gene-silencing tools, the CRISPR-Cas9 system targets the genome’s source material: while RNA interference (RNAi) must target many copies of messenger RNA in order to tamp down a gene’s expression, CRISPR-Cas9 permanently turns off genes at the DNA level. The CRISPR-Cas9 system includes an enzyme that makes a cut in DNA, and is paired with a single guide RNA (sgRNA), which researchers construct to home in on a specific site in the genome. The DNA cut – known as a double strand break – closely mimics the kinds of mutations that occur naturally, for instance after chronic sun exposure. But unlike the UV rays that can result in genetic alterations, the CRISPR-Cas9 system causes a mutation at a precise location in the genome.

When cellular machinery repairs the DNA break, it removes a small snip of DNA, rendering a gene non-functional. In this way, researchers can precisely turn off specific genes in the genome.

To turn off genes on a grand scale, both sets of investigators developed libraries of more than 65,000 sgRNAs. The library from Zhang’s group is designed to target almost every protein-coding gene in the genome.

In addition to these experiments on resistance, the researchers also conducted several other studies, using the CRISPR-Cas9 system in human pluripotent cells and cells grown in different culture conditions. The CRISPR-Cas9 system proved effective across these cell types, further demonstrating its versatility.

“With this work, it is now possible to conduct systematic genetic screens in mammalian cells,” said David Sabatini, a member of the Whitehead, professor of biology at MIT, investigator of the Howard Hughes Medical Institute, senior associate member at the Broad, and a member of the Koch Institute. Sabatini is also a co-senior author of one of the Science papers. “This will greatly aid efforts to understand the function of both protein-coding genes as well as non-coding genetic elements.”

David Root, director of the Broad’s Genetic Perturbation Platform (formerly known as the RNAi Platform), and his platform colleagues assisted in the development of the GeCKO (genome-scale CRISPR knockout) screening technique reported in the Broad-McGovern study. In addition to RNAi screening, the platform now offers a range of genetic perturbation technologies to the Broad community. That list now includes the CRISPR-Cas9 system.

“The CRISPR-Cas9 screening method distinguishes itself from RNAi by producing knockouts instead of knockdowns and it will be cleaner for many phenotypes to see the complete knockout,” said Root who is a co-author of the Broad-McGovern paper. “The agreement among the distinct reagents targeting the same gene looks a lot higher for CRISPR-Cas9 compared to RNAi, which gives you a lot more confidence about gene specificity for these results.”

One of the unique advantages to the CRISPR-Cas9 system that researchers intend to explore in the future is that the system offers access to the world beyond genes: non-coding regions of the genome that may influence when and where proteins are produced in a manner that does not depend on their production of RNA. Such regions were out of reach for RNAi, but with CRISPR-Cas9, these elements may now be exploitable in mammalian cells.

“These papers together demonstrate the extraordinary power and versatility of the CRISPR-Cas9 system as a tool for genome-wide discovery of the mechanisms underlying mammalian biology,” said Eric Lander, director of the Broad Institute and co-senior author of one of the Science papers. “And we are just at the beginning: we’re still uncovering the capabilities of this system and its many applications.”