Convergence in head and neck cancer 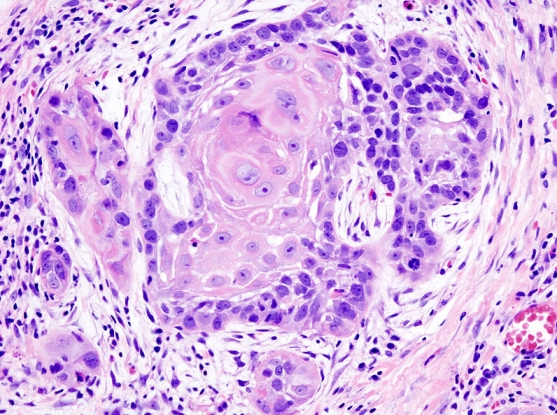 In back-to-back papers published online July 28 in Science, researchers from the Broad Institute, Dana-Farber Cancer Institute, Johns Hopkins Kimmel Cancer Center, the University of Pittsburgh, and the University of Texas MD Anderson Cancer Center have confirmed genetic abnormalities previously suspected in head and neck cancer, including defects in the tumor suppressor gene known as p53. But the two teams also found mutations in the NOTCH family of genes, suggesting their role as regulators of an important stage in cell development may be impaired.

Powerful new technologies that zoom in on the connections between human genes and diseases have illuminated the landscape of cancer, singling out changes in tumor DNA that drive the development of certain types of malignancies such as melanoma or ovarian cancer.

Now several major biomedical centers have collaborated to shine a light on head and neck squamous cell cancer. Their large-scale analysis has revealed a surprising new set of mutations involved in this understudied disease.

In back-to-back papers published online July 28 in Science, researchers from the Broad Institute, Dana-Farber Cancer Institute, Johns Hopkins Kimmel Cancer Center, the University of Pittsburgh, and the University of Texas MD Anderson Cancer Center have confirmed genetic abnormalities previously suspected in head and neck cancer, including defects in the tumor suppressor gene known as p53. But the two teams also found mutations in the NOTCH family of genes, suggesting their role as regulators of an important stage in cell development may be impaired.

“This adds a new dimension to head and neck cancer biology that was not on anyone’s radar screen before,” said Levi A. Garraway, a senior associate member of the Broad Institute, an assistant professor at Dana-Farber Cancer Institute and Harvard Medical School, and a senior author of one of the Science papers. “Head and neck cancer is complex and there are many mutations, but we can infer there is a convergence on a cellular process for which we previously did not have genetic evidence. It shows that if you do a genome sequencing project of this size you can gain major new biological insights.”

“The mutational analysis of NOTCH clearly indicated the power of genetic changes determining the function of these genes,” said Kenneth W. Kinzler, professor of oncology and a molecular geneticist at Johns Hopkins, co-director of the Ludwig Center at Johns Hopkins, and an author of one of the Science papers. “It gives us an important clue to start studying their function.”

Head and neck cancer is the sixth most common non-skin cancer in the world, with more than half a million new cases each year. Smokers, drinkers, and people infected with the human papillomavirus (HPV) have the highest risk of developing head and neck cancer, which is the collective name for tumors found in the oral cavity, including the mouth, larynx, and pharynx.

Patients often seek medical care only once they are in the later stages of the disease, when they may be offered surgery, radiation, chemotherapy, or a combination. Treatments can be disfiguring and debilitating, leaving patients unable to speak or swallow. The five-year survival rate of 50 percent has improved little over the past 40 years.

Jennifer R. Grandis, a professor of otolaryngology and pharmacology and chemical biology at the University of Pittsburgh School of Medicine and a senior author of one of the Science papers, bemoaned the dearth of genetic information about head and neck cancer several years ago at a conference where Garraway had given a talk about the genomic landscape of melanoma.

“There was a really big gap in knowledge that was an obstacle to doing the right kind of research” about head and neck cancer, she said. “If we didn’t know the spectrum of the mutations that were in our patients’ tumors, we couldn’t begin to develop more appropriate therapies because we were sort of playing in the dark.”

Grandis and Garraway decided to study a University of Pittsburgh collection of 74 pairs of tumor and normal tissue samples using the Broad’s capacity to perform whole-exome sequencing. The exome represents the tiny fraction of the genome that encodes proteins. Focusing on just these protein-producing genes allows scientists to zero in on mutations that alter key proteins involved in cancer growth. Another collaboration was unfolding among the cancer geneticists, sequencing experts, clinical researchers, and surgical oncologists at Johns Hopkins, MD Anderson, and Baylor College of Medicine to study 32 pairs of head and neck tumor and normal tissue samples by whole-exome sequencing and validate the findings in an additional 88 samples.

Both teams found mutations in the p53 gene in a little more than half of the tumors they studied. The next most common mutation occurred in NOTCH1, which showed up in about 15 percent of tumors.

Normally, NOTCH1 controls how cells differentiate into other kinds of cells, mature, stop dividing, and ultimately die. In head and neck cancer, the scientists saw mutations that turn NOTCH1 off, blocking differentiation and trapping cells in a proliferative, pro-cancer state. Their maturation is arrested, leaving them stuck in an earlier stage, where other damage from smoking or alcohol or even p53 mutations can destabilize the genome.

NOTCH1’s inactivation in head and neck cancer was surprising because in other cancers, such as leukemia, too much NOTCH signaling leads to cancer.

“Our study suggests that a gene’s role can depend on the tumor type. In some cases, a gene can act as a growth promoter in cancer, and in other cases, such as head and neck cancer, the same gene behaves as a growth suppressor,” said Kinzler.

Efforts to combat the mutated p53 tumor suppressor gene with targeted drugs, for example, have so far been unsuccessful.

The next step based on these novel head and neck cancer discoveries, the scientists agree, is to tease out how the genes function in normal cells, whether they form the lining of the larynx, pharynx, or another anatomical site affected by head and neck cancer.

“Both of our studies reveal few clues to the significance of NOTCH mutations. Further studies will be necessary to define its role in prognosis, diagnosis, and/or treatment,” said Nishant Agrawal, a head and neck surgical oncologist at Johns Hopkins and a lead author of one of the Science papers. “The idea is to use these genetic alterations to predict a patient’s prognosis and define personalized treatment strategies tailored to their cancer’s genome.”

Both teams confirmed the role of HPV infection in head and neck cancer, particularly oropharyngeal cancer. Thought to be transmitted by oral sex, the infection has become more prominent. The studies reveal that HPV-positive tumors carried fewer mutations than HPV-negative tumors. Patients with HPV-positive head and neck cancers tend to fare better than patients whose cancers are not caused by the virus.

Translating these discoveries into therapies for patients will take more studies and more time, the scientists all said, but the revelations set a course for the future.

Jeffrey N. Myers, professor of head and neck surgery at MD Anderson, said both groups’ work highlights the complexity of the disease and its multiple gene abnormalities.

“It has told us new things that will give us both clinical and scientific opportunities to study in the near and long term,” Myers said. “I think that we’re also in a position to design very specific clinical studies to further understand the significance of these mutations, as well as to begin to think about potentially targeting some of the abnormalities.”

Those studies could include looking at patients with different mutations in addition to p53 and the NOTCH family to see how well they fare.

“The race will be on to figure out the function and particularly the therapeutically relevant function of these mutations,” Grandis said.

“I think it’s great we are advancing head and neck cancer research this way,” he said. “Unfortunately, the cancer has been beating us. Now it’s time for us to take a permanent lead.”

The research reported by the Broad, Dana-Farber, and University of Pittsburgh group was supported by major funding from the Carlos Slim Health Institute as part of the Slim Initiative for Genomic Medicine. The investigators also received funding for aspects of the work from the National Human Genome Research Institute, the National Cancer Institute, the Starr Cancer Consortium, the Novartis Institutes for BioMedical Research, and the American Cancer Society.

The research reported by the Johns Hopkins, MD Anderson, and Baylor group was funded by grants from the National Institutes of Health, the National Institute of Dental and Craniofacial Research, the Cancer Prevention Research Institute of Texas, the AACR Stand Up To Cancer-Dream Team Translational Cancer Research Grant, and the Virginia and D.K. Ludwig Fund for Cancer Research. Author disclosures related to royalty agreements may be found in the paper.

About Johns Hopkins Kimmel Cancer Center
Since its opening in 1973, the Johns Hopkins Kimmel Cancer Center has led the world in deciphering the mechanisms of cancer and new ways to treat it. The strength of our research and treatment programs was recognized early on by the National Cancer Institute, becoming one of the first to earn comprehensive cancer center status and recognition as a “Center of Excellence.”

About MD Anderson
The University of Texas MD Anderson Cancer Center in Houston ranks as one of the world's most respected centers focused on cancer patient care, research, education
and prevention. MD Anderson is one of only 40 comprehensive cancer centers designated by the National Cancer Institute. For eight of the past 10 years, including 2011, MD Anderson has ranked No. 1 in cancer care in “America's Best Hospitals,” a survey published annually in U.S. News & World Report.

About the University of Pittsburgh School of Medicine
As one of the nation’s leading academic centers for biomedical research, the University of Pittsburgh School of Medicine (http://www.medschool.pitt.edu/) integrates advanced technology with basic science across a broad range of disciplines in a continuous quest to harness the power of new knowledge and improve the human condition. Driven mainly by the School of Medicine and its affiliates, Pitt has ranked among the top 10 recipients of funding from the National Institutes of Health since 1997.

Likewise, the School of Medicine is equally committed to advancing the quality and strength of its medical and graduate education programs, for which it is recognized as an innovative leader, and to training highly skilled, compassionate clinicians and creative scientists well-equipped to engage in world-class research. The School of Medicine is the academic partner of UPMC, which has collaborated with the University to raise the standard of medical excellence in Pittsburgh and to position health care as a driving force behind the region’s economy. For more information about the School of Medicine, see www.medschool.pitt.edu.

From the BroadMinded blog: Arrested development: head and neck cancer

From the University of Pittsburgh: UPMC collaborates with the Broad Institute, Dana-Farber Cancer Institute to reveal unexpected genetic mutations