Considering the possibilities: New method looks at nearly every mutation in a single gene to identify those driving cancer 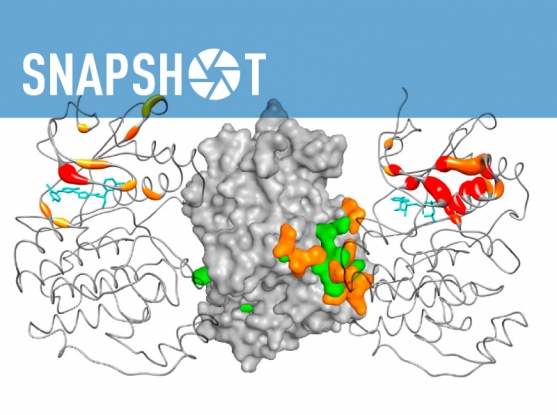 Credit : Image by Lauren Solomon, Broad Communications.
Using technologies developed previously at the Broad, researchers created a library of nearly every possible mutation in the oncogene MAPK1/ERK2, then systematically tested the function of each mutation.
By Veronica Meade-Kelly

Using technologies previously developed at the Broad, researchers have analyzed nearly all genetic variants in the oncogene MAPK1/ERK2, revealing insights that could inform treatment.

A primary goal of precision medicine in cancer has been to use findings generated from genomic research to inform treatment options, matching patients with effective therapies based on the specific mutations in their tumor’s DNA. But the research needed to more fully actualize this goal is currently at a bottleneck: thousands of tumors have been sequenced, revealing hundreds of thousands of mutations, but researchers don’t yet know what role, if any, most of these mutations play in cancer.

In a Cell Reports paper published this week, a research team from the Broad Institute, led by senior author Cory Johannessen and co-first authors Lisa Brenan and Aleksandr Andreev, outlined a novel approach that could help address this challenge. Using technologies developed previously at the Broad, the researchers created a collection, or library, that included nearly every possible mutation in a single gene, MAPK1/ERK2, part of a biological pathway known to be defective in many cancers, and then systematically tested the function of each mutation. The goal was to differentiate between mutations that might be driving cancer and those that are irrelevant to the disease.

From these experiments, the team found that it wasn’t just frequently-seen mutations that drove cancer: a number of rare mutations performed the same function, possibly by triggering the same cellular mechanisms as their more-often-seen counterparts. Moreover, by treating these mutations with ERK-inhibiting molecules, the team identified mutations that were more likely to be resistant to existing cancer therapies.

The researchers hope that their work will not only serve as a model for the study of other oncogenes, but that the cancer-driving and drug-resistant mutations they uncovered may inform clinical trials and, ultimately, patient treatment. Some clinical trials are already broadening their enrollment criteria to include some of the mutations unearthed by this research.