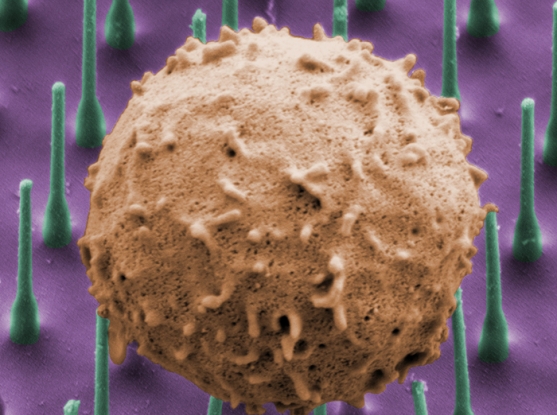 New work from the Broad Institute’s Klarman Cell Observatory, Brigham and Women’s Hospital, Harvard University, MIT, and Yale University expands the understanding of how one type of immune cell – known as a T helper 17 or Th17 cell – develops, and how its growth influences the development of immune responses. By figuring out how these cells are “wired,” the researchers make a surprising connection between autoimmunity and salt consumption, highlighting the interplay of genetics and environmental factors in disease susceptibility. The results of their work appear in three companion papers in Nature this week.

The researchers concentrated on T cells because of their important roles in clearing foreign pathogens and in various autoimmune diseases. “The question we wanted to pursue was: how does the highly pathogenic, pro-inflammatory T cell develop?” said Vijay Kuchroo, co-director of the Center for Infection and Immunity at Brigham and Women’s Hospital’s Biomedical Research Institute and a Broad associate member. Kuchroo is also a professor of neurology at Harvard Medical School. “Once we have a more nuanced understanding of the development of the pathogenic Th17 cells, we may be able to pursue ways to regulate them or their function.”

The human immune system is in a state of delicate balance: too little activity leaves a person vulnerable to foreign invaders, but too much activity threatens to harm the body it ought to protect. When this delicate balance is broken, it can lead to autoimmune diseases. But little is known about the molecular circuitry that maintains — or upsets — such a fine equilibrium.

“We wanted to understand how the body gets the right kinds of immune cells in the right amount, and how it keeps those cells at the right activity level so that they are not too active but also not underactive,” said Aviv Regev, a Broad Institute core member and an associate professor of biology at MIT. Regev is also an Early Career Scientist at Howard Hughes Medical Institute and the director of the Klarman Cell Observatory at the Broad. “The value in doing an unbiased analysis is that we’re able to understand a lot more about the molecular biology at play and identify novel players in this process.”

Th17 cells can promote inflammation that is important for protection against pathogens, but they have also been implicated in diseases like multiple sclerosis, psoriasis, rheumatoid arthritis, and ankylosing spondylitis. Treatment options for some of these diseases, such as psoriasis, include manipulating T cell function.

David Hafler’s group at Yale University studies human autoimmune diseases in general and the role of Th17 cells in particular, and has collaborated with Kuchroo’s group for many years. “These are not diseases of bad genes alone or diseases caused by the environment, but diseases of a bad interaction between genes and the environment,” said Hafler, Gilbert H. Glaser Professor of Neurology, professor of immunobiology, chair of Department of Neurology, and senior author of one of this week’s Nature papers.

Some genes have been previously tied to Th17 development, but the research team wanted a more comprehensive view. One of the challenges of studying cell development, however, is that cells, particularly immune cells, change and evolve over time. The researchers chose to take frequent snapshots – 18 over the course of three days – to see what was happening within the T cells as they grew from naïve cells into more specialized Th17 cells. From these snapshots, they used computational algorithms to begin to stitch together a network of molecular changes happening as the cells matured.

With this initial information in hand, the researchers systematically tested their model by silencing genes one-by-one, which could help reveal the most important points in the network and untangle their biological meaning.

To do so, they needed a technology that would allow them to silence genes without perturbing the cells in the process. Although RNA interference (RNAi) is a powerful way to turn off individual genes, most RNAi techniques rely on viruses as delivery vehicles. When scientists tried to perturb the T cells using these traditional techniques, cells either changed or died, limiting the effectiveness of these strategies.

“This was a real challenge,” said Kuchroo. “Every time we tried to downregulate a gene with existing technologies, the cell would change. We didn’t know if we were looking at the right thing. We needed a new technology – something that could have a dramatic but precise effect.”

A solution came from an unlikely source. Harvard professor and Broad associate member Hongkun Park and his lab in the departments of chemistry and chemical biology and of physics had been working on a computer-chip-like structure to interact with brain cells. Co-first authors Alex Shalek and Jellert Gaublomme along with other lab members had developed a bed of silicon nanowires – miniscule needles designed to pierce cells.

“We learned that we could use these needles to deliver molecules into cells in a minimally invasive fashion,” said Park. “And as Vijay and Aviv taught me, there are lots of things that this allows you to do that you could not do before. It’s been an eye-opening experience.”

Just as the thin needle of a syringe can be inserted into the skin and cause no more than a small pinching sensation, nanowires can be inserted into cells, causing minimal disruption. Using this new technology, the team teased apart the network, piece by piece, by deleting each of the key genes required in the development of Th17 cells.

With the help of co-first author Nir Yosef, a postdoc at the Broad and Brigham and Women’s Hospital, the team found that Th17 cells are governed by two networks, seemingly at odds with each other: one network positively regulates the cells, coaxing them to increase in number while suppressing the development of other cells. The other negatively regulates them, having the opposite effect.

“It’s a system in perfect tension,” said Regev. “It both suppresses and promotes Th17 cell creation, keeping the cells at equilibrium.”

Through this analysis, one particular gene stood out to the researchers: SGK1. The gene plays an important role in the cells’ development, and when turned off in mice, Th17 cells are not produced.

SGK1 had not been described in T cells before, but it has been found in cells in the gut and in kidneys, where it plays a role in absorbing salt.

Based on this, two teams of researchers set out to test the connection between salt and autoimmunity — Kuchroo, Regev, and their colleagues working with mouse cells and mouse models, and Hafler’s team working with human cells.

Through efforts led by co-first author and Brigham and Women’s Hospital postdoc Chuan Wu, the team found that they could induce more severe forms of autoimmune diseases, and at higher rates, in mice fed a high-salt diet than in those that were fed a normal mouse diet. Kuchroo notes though that the high-salt diet alone did not cause autoimmune diseases – the researchers had to induce disease, in this case by injecting a self-antigen to prompt the mouse immune system to respond.

“It’s not just salt, of course,” Kuchroo said. “We have this genetic architecture – genes that have been linked to various forms of autoimmune diseases, and predispose a person to developing autoimmune diseases. But we also suspect that environmental factors – infection, smoking, and lack of sunlight and Vitamin D – may play a role. Salt could be one more thing on the list of predisposing environmental factors that may promote the development of autoimmunity.”

“One important question is: how can one think of these results in the context of human health?” said Regev. “It’s premature to say, ‘You shouldn’t eat salt because you’ll get an autoimmune disease.’ We’re putting forth an interesting hypothesis – a connection between salt and autoimmunity – that now must be tested through careful epidemiological studies in humans.”

The researchers plan to harness the cell circuitry data to identify and follow up on potential drug targets. Kuchroo notes that the published work and future studies are only possible because of the interdisciplinary team brought together by shared questions about cell circuitry.

“We often work in isolation in our areas of expertise, but this is the kind of work I could not have done in my own lab, and that Hongkun and Aviv could not have done in their respective labs,” said Kuchroo. “We needed this unique combination of tools and technologies to come together around this problem. Looking forward, we’ll need the tools and intellect of different disciplines in order to solve big problems in biology and medicine.”

The Eli and Edythe L. Broad Institute of MIT and Harvard was founded in 2003 to empower this generation of creative scientists to transform medicine with new genome-based knowledge. The Broad Institute seeks to describe all the molecular components of life and their connections; discover the molecular basis of major human diseases; develop effective new approaches to diagnostics and therapeutics; and disseminate discoveries, tools, methods and data openly to the entire scientific community.

About Brigham and Women’s Hospital

Brigham and Women's Hospital (BWH) is a 793-bed nonprofit teaching affiliate of Harvard Medical School and a founding member of Partners HealthCare. BWH has more than 3.5 million annual patient visits, is the largest birthing center in New England and employs nearly 15,000 people. The Brigham’s medical preeminence dates back to 1832, and today that rich history in clinical care is coupled with its national leadership in patient care, quality improvement and patient safety initiatives, and its dedication to research, innovation, community engagement and educating and training the next generation of health care professionals. Through investigation and discovery conducted at its Biomedical Research Institute (BRI), BWH is an international leader in basic, clinical and translational research on human diseases, involving nearly 1,000 physician-investigators and renowned biomedical scientists and faculty supported by nearly $625 million in funding. BWH continually pushes the boundaries of medicine, including building on its legacy in organ transplantation by performing the first face transplants in the U.S. in 2011. BWH is also home to major landmark epidemiologic population studies, including the Nurses' and Physicians' Health Studies, OurGenes and the Women's Health Initiative. For more information and resources, please visit BWH’s online newsroom.