The chromosomal secrets of a plant pathogen 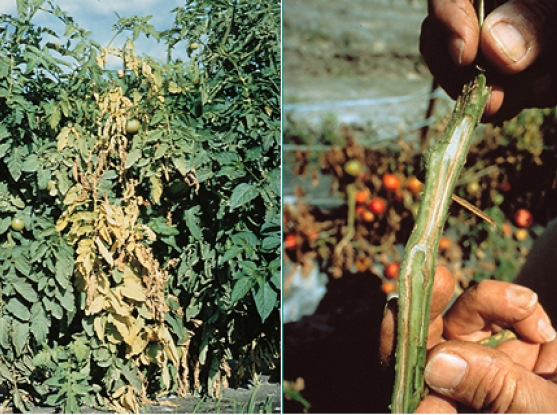 The Fusarium fungi have an expansive reach. Some plague tomatoes, while others attack bananas; some invade cereal crops and can poison bread with toxins. Species of Fusarium have found ways to penetrate the defenses of potatoes, peppers, eggplants, and other plants, causing wilting, rot, and blight. And now, the ubiquitous fungi are beginning to crop up in hospitals, attacking patients whose immune systems have been compromised.

Fusarium's impact on agriculture and food safety and its growing role in human health have sparked the interest of researchers like the Broad Institute's Li-Jun Ma, who wants to understand how species of Fusarium can invade different hosts. Together with colleagues from all over the world, Ma, who works in the Broad's Fungal Genome Initiative, set out to discover what makes certain species so dangerous to their hosts while close cousins are benign. As they tested, analyzed, and validated their results, an explanation for Fusarium's toxicity began to emerge: certain Fusarium species have unique genetic material that may give them the ability to invade a new host. Furthermore, the pathogens can swap chromosomes with one another, passing the power to invade on to fellow Fusarium pathogens. Their results were published in this week's issue of Nature.

To understand where Fusarium's virulence comes from, Ma and her colleagues built on previous sequencing work at the Broad. With the help of the Broad's Sequencing Platform, they sequenced and compared the genomes of three species: F. graminearum (Fg), which invades cereals; F.verticilliodes (Fv), which is limited to maize; and F.oxysporum f.sp. lycopersici (Fol), a tomato pathogen that can also infect mice with compromised immune systems.

Most of the time, when scientists talk about the transfer of genetic material from one organism to another, they are referring to the genetic material that a parent passes down to a child when the child is conceived. This is called vertical gene transfer. However, some organisms, such as bacteria, are able to give pieces of genetic material to one another in the way that humans might share pirated music or movies — once one organism acquires the illicit material, it can share copies of the information with others.

Horizontal gene transfer usually occurs in bacteria, but can also happen in certain animals as well as in fungi. However, organisms usually do not exchange large portions of the genome or DNA that confers the ability to invade a host — this is the first time that such a dramatic transfer has been observed.

"We found an incredible amount of genetic material that doesn't look like it is inherited through traditional genetic approaches," Ma said. "The discovery has a profound impact on our understanding of eukaryotic genome evolution and pathogenicity development as this is the first time that horizontal transfer of genetic material at such a large scale has been reported."

The project represents a collaboration between the Broad and the international Fusarium research community.

To help solve this puzzle of how some species of Fusarium develop the ability to cause disease, the researchers wanted to find out how the pathogen can get past a plant's defenses. Plants have a layer of woody tissue, or xylem, that helps to keep invaders out.

"If you have a pathogen and a host, they are in a battle," Ma said. "The pathogen wants to eat the host, and the host doesn't want to be eaten so they are constantly interacting." The results from this study suggested that the extra chromosomes carry the genetic instructions for executing this invasion, including detecting a plant, secreting enzymes to break down the xylem, and then penetrating and invading the host.

To test this hypothesis, the researchers set out to observe if the tomato pathogen could pass its genetic material onto others. They incubated a strain of pathogen that can cause tomato blight with a benign strain, and found that the formerly benign strain had gained the ability to infect tomatoes.

Scientists can spill open a nucleus's contents to view an organism's chromosomes. An image of the resulting spread of chromosomes showed that the newly pathogenic fungus had picked up chromosome 14 — a chromosome from the pathogenic strain that contains some known invasive instructions, including those for making secreted proteins during a plant infection. The dangerous strain had given the benign strain the molecular weaponry necessary to attack the plant.

"As first observers of a great scientific breakthrough, we were thrilled to document the migration of these chromosomes," said Martijn Rep, a co-corresponding author and researcher at the University of Amsterdam. "The combination of the results from (the comparative genomics analysis and the experimental studies) was natural and created a beautiful view of the genetics and evolutionary processes underlying fungal pathogenicity."

Understanding how Fusarium species gain the ability to plague a host could help agricultural researchers develop strategies to control the pathogen and protect crops.

"Imagine Fusarium in the field — it can acquire this set of armory through these unique and pathogenicity-related chromosomes so it can obviously regenerate (the ability to invade a host)," Ma said. "This promotes rethinking the control strategy."

Ma and her colleagues plan to sequence and compare the genomes of ten additional strains of Fusarium from all over the world to determine if each species contains unique chromosomes that allow it to attack its host.

"Evolutionarily, our finding is extraordinary," Ma said. "One core part of the genome is conserved across the species and this lineage-specific chromosome is unique for each (strain). There are so many questions behind that. We are absolutely stunned and excited."

Birds of a feather inherit together
Broad researchers recognized for innovation, teamwork in cancer research