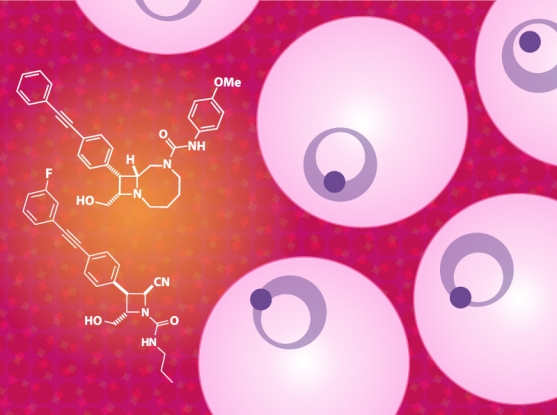 Credit : Image by Susanna Hamilton, Broad Communications
Screens of the Broad’s entire DOS (Diversity Oriented Synthesis) library of over 100,000 small molecules on the malaria parasite P. falciparum have identified compounds that act on a novel malaria target during all three stages of the disease.
Cambridge, MA, September 7th, 2016

After screening a library of over 100,000 small molecules, researchers from the Broad Institute of MIT and Harvard have identified compounds that act on a novel target in the malaria parasite, Plasmodium falciparum.The study resulted in the publication of a paper (available online September 7 inNature] and an open, data-rich resource for the malaria research community called theMalaria Therapeutics Response Portal(MTRP).

Malaria, a mosquito-borne disease, sickens over 200 million people and kills half a million people each year – mostly African children. The form of the disease caused by the parasite P. falciparum is widely considered the most dangerous, often causing fevers, vomiting, and seizures, and can be fatal. Pharmaceutical treatments for malaria have been in existence for decades, and the pipeline for such drugs has increased significantly over the last 15 years, but many of these drugs are aimed at the same targets and malaria parasites have displayed a stubborn knack for developing resistance to treatments – often in as little as a year after a drug’s introduction.

In an effort to look for potential new drug leads to combat malaria, the Broad team, led by Stuart Schreiber, a founding core member of the Broad and director of its Center for the Science of Therapeutics (CSofT), screened CSofT’s full DOS library of small molecular compounds against P. falciparum parasites. This work was funded by a grant from the Bill & Melinda Gates Foundation.

The DOS, or Diversity Oriented Synthesis, library is a unique collection of chemical compounds that are not traditionally represented in pharmaceutical libraries and were designed to emulate small molecules found in nature. Those DOS compounds that showed signs of operating through a novel mechanism of action – a target that current drugs in the pipeline didn’t address and, perhaps, might not be as susceptible to resistance – in the team’s initial screens were prioritized for further study.

Schreiber’s team then prioritized compounds further by applying a second criterium: they looked for compounds that appeared to work in all three stages of the P. falciparum life cycle. Nearly all current antimalarials work during malaria’s “blood stage,” during which the parasites circulate in the blood and wreak havoc on the body.

“This compound targets all vertebrate stages of the P. falciparum malaria infection,” explains Nobutaka Kato, a senior research scientist in the Broad’s Center for the Development of Therapeutics (CDoT) and co-first author of the Nature paper. “The parasite goes to the liver first, then the blood stream, followed by a transmission stage. Our compound hits all three of these stages, which is very rare in the therapeutic pipeline.”

A therapeutic that acts on all three stages could, in theory, be taken at any point prior to or during infection, potentially wiping out parasites before they fester in the liver and are released into the blood. It could also possibly counteract the parasites that are active during the transmission stage. Currently, even individuals undergoing treatment can spread the disease.

When Schreiber’s team looked for compounds that met both criteria – displaying a novel mechanism of action and activity during all three disease stages – a series of compounds stood out. All of them acted on the same target, phenylalanyl-tRNA synthetase, a complex enzyme that contributes to protein synthesis. When they tested the compounds in mice, it eradicated the malaria parasites during all three stages of the disease.

The work provides a rich resource for the malaria research community, as the MTRP contains far more therapeutic leads (many with novel mechanisms of action) than the Broad alone can explore. It also shows the utility of this layered, chemical screen approach to drug discovery for infectious disease.

“We have been exploring the use of this novel chemistry almost entirely within the context of the mammalian world, focusing on human disease and cell circuitry, but until recently we hadn’t applied the compounds to pathogen biology. We think these more recent efforts validate this approach for pathogens,” says Schreiber, who is also the Morris Loeb Professor in the Department of Chemistry and Chemical Biology at Harvard University and a Howard Hughes Medical Institute investigator.

The findings also suggest that wielding a broader selection of compounds in the search for antimalarials may yield new drug targets. The DOS library contains one hundred thousand unique compounds designed and housed at the Broad – small molecules that are entirely different from those traditionally tested against malaria by other organizations.

“A phrase that is often uttered in our lab is: ‘Will different chemistry yield different outcomes?’ These findings, to us, prove that this is the case,” says co-first author Eamon Comer, a chemist and group leader in CSofT. “With new chemistry we get a mechanism of action that no one has ever seen before.”

All of the chemical structures of the 100,000 DOS library compounds, and the data from the team’s malaria screens, are publicly available via the MTRP. This includes a trove of information on highly active compounds working by previously identified mechanisms of action or by currently unknown mechanisms.

“We invite the scientific community to use this database as a jumping off point for their work developing antimalarial therapies,” Schreiber says.

This work was made possible through the support of the Bill & Melinda Gates Foundation; the Global Health Innovative Technology Fund; Medicines for Malaria Venture; Eisai Co., Ltd.; Wellcome Trust; the Canadian Institute of Health Research; and the National Science Foundation.