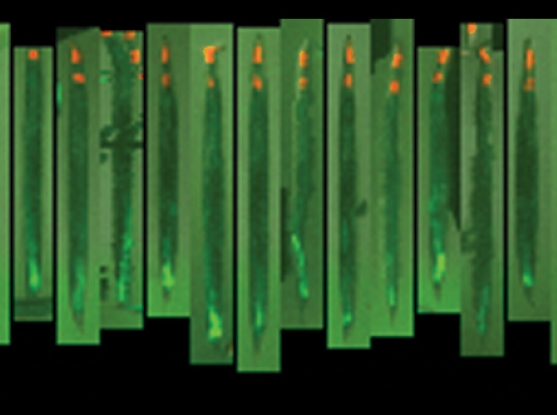 For decades, the roundworm Caenorhabditis elegans has been one of the classic organisms used by scientists for the study of disease pathways and genetics. Notably, these worms share most of its fundamental biological pathways with humans. For this reason, researchers perform a variety of C. elegans studies to learn more about human disease. Just like cells, C. elegans can be handled by robotics and used in high-throughput experiments to uncover novel drugs and drug targets. However, researchers have lacked the technology to make measurements on individual worms with image-based tools in a high-throughput manner.

With C. elegans, the greatest challenge when trying to make measurements on individual worms is that they tend to touch, cross and tangle up when imaged in the multi-well formats typically used in high-throughput experiments. To address this problem, researchers from the Broad Institute in collaboration with partners at MIT and Massachusetts General Hospital developed a new image-based, high-throughput screening tool, known as WormToolbox, that enables scientists to view individual worms. With this new imaging capacity, researchers can now perform a wider range of assays than previously possible. Results of their work are published in Nature Methods. The WormToolbox software is available through the Broad’s open-source CellProfiler project.

Many biological pathways cannot be studied in cell-based assays but require investigation in a whole organism. “WormToolbox enables measurements on individual worms by computationally finding each worm in a cluster of tangled worms,” said Carolina Wählby, computational biologist in the Broad’s Imaging Platform, associate professor in quantitative microscopy at the SciLifeLab and Centre for Image Analysis at Uppsala University, Sweden, and first author of the paper. “The goal was to develop WormToolbox so that scientists can accurately perform a much wider range of image-based high-throughput assays on worms.”

Along with simple measurements of worm size, shape, and fluorescence spot counts, WormToolbox can be used to quantify any worm variability that can be imaged. “Once the individual worms are separated, we can map them to a common shape, or worm atlas, and quantify staining patterns relative to the anatomy of the worms,” said Wählby. After extracting measurements of each worm using WormToolbox, the machine learning algorithm in CellProfiler Analyst enable automated classification of worms to detect subtle observable differences in mixed populations of worms with variable visual features.

CellProfiler Analyst uses machine learning based on feedback from the researchers to score multiple subtle and complex visual differences in image-based screens. Just as with individual cell images, WormToolbox software allows researchers to rapidly train a computer to score unusual single worm morphologies automatically. This will be helpful when screening large libraries of compounds. The tool is effective when used in low-throughput experiments involving a small number of worms or variables or in high-throughput tests involving thousands to millions of variables.

In collaboration with researchers at Massachusetts General Hospital, Wählby’s team is investigating pathways of infection by viewing which part of the worm intestine reacts to infection with a pathogen. This is achieved by testing for expression of certain genes and measuring the location of the test signal along the length of the worm. This has been possible before but only in a low-throughput capacity, looking at a few worms at a time. Wählby said, “Now that everything can be automated it is possible to perform genome-scale RNAi and large-scale chemical screens and we can compare subtle variations in a quantitative way.”