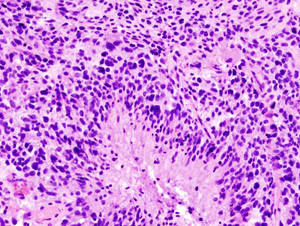 In 2006, cancer researchers from the Broad Institute of MIT and Harvard and several other institutions teamed up to use large-scale genomic technologies to better understand the molecular basis of cancer. The first results from that collaboration — a $100 million pilot project of The Cancer Genome Atlas (TCGA) effort — reveal new mutations behind the most common form of brain cancer and point to some of the core pathways that allow the disease to take hold. The new work also suggests a potential mechanism for resistance to drugs used in the treatment of brain cancer. The findings are published in the September 4 advance online edition of Nature.

The TCGA effort, funded by the National Cancer Institute and the National Human Genome Research Institute of the National Institutes of Health, began with a pilot project, which is intended to determine the feasibility of a full-scale effort to unravel the genomic basis of cancer and assess the value of such an effort in advancing cancer research and improving patient care. Three cancers — brain (glioblastoma multiforme or GBM), lung (squamous carcinoma), and ovarian (serous cystadenocarcinoma) — were chosen for the pilot phase. Together, the three cancers account for more than 210,000 cancer cases each year in the US. GBM is a fast-growing brain tumor that causes 13,000 deaths in the United States each year, and most GBM patients will not survive longer than a year after diagnosis. The interim glioblastoma analysis is the first to be released by the TCGA researchers.

Unraveling the genetic nature of GBM requires a massive collaborative effort, which combines the resources of the Broad Institute and 17 other research institutions across the country. To identify DNA alterations linked to GBM, members of the TCGA research network analyzed the genomes of tumor samples donated by more than 200 GBM patients. The scale of this comprehensive analysis is evidenced by the variety of genomic data generated from the samples: small changes in DNA sequence; larger-scale changes in chromosomes; levels of gene expression; patterns of how certain molecules interact with DNA; and information related to patients’ clinical treatment.

Researchers at the Broad Institute, led by senior associate member Matthew Meyerson, contributed to the pilot project with data on changes in gene expression levels and alterations in gene copy number. In addition, the Broad Institute is one of three Genome Sequencing Centers of the TCGA effort and this center, led by Broad director Eric Lander, provided the DNA sequence of tumor cells. This undertaking relied upon the coordination of several Broad Institute research platforms, especially the Genetic Analysis Platform, the Biological Samples Platform, and the Genome Sequencing Platform.

“The new discoveries were made possible, in large part, by data generated at the Broad and by a huge collaborative effort both within the institute and with other members of the TCGA network,” said Meyerson, who is also an associate professor at Harvard Medical School and at Dana-Farber Cancer Institute.

After sequencing 601 genes in the GBM samples and in control tissue, changes in three genes were commonly found in the tumor samples, bringing the total number of gene mutations identified in glioblastoma cells to eight. The affected genes were: NF1, a gene involved in neurofibromatosis 1, a rare, inherited disorder of uncontrolled tissue growth along nerves; ERBB2, a well-known breast cancer gene; and PIK3R1, a gene that influences activity of an enzyme called PI3 kinase that is disrupted in many cancers. Because PI3 kinase is already a major target for therapeutic development, the discovery of frequent mutations in the PIK3R1 gene means that the presence of these mutations may dictate whether a patient responds to PI3 kinase inhibitors. “Each of these mutated genes defines a new target for glioblastoma treatment,” said Meyerson.

The analysis also highlighted three biological pathways potentially involved in GBM pathogenesis. The three pathways, each of which was disrupted in more than three-quarters of GBM tumors, have roles in cell division, growth regulation, DNA repair, and cell death.

Information on how these pathways are disrupted in cancer is enlightening for researchers working to develop tailored therapies to treat cancer. A drug aimed at one biochemical pathway may best treat tumors with genetic alterations in that pathway; tumors without that alteration may be better treated by drugs that work differently. Moreover, the three pathways were interconnected and deregulated together in most of the GBM samples, suggesting that combination therapies directed against all three pathways may prove effective.

Future work may further reveal what goes awry to lead to brain cancer, but one exciting finding from this interim analysis may have more immediate clinical impact. Physicians already know that patients with GBM tumors that have an inactivated, or methylated, MGMT gene respond better to temozolomide, a chemotherapy drug commonly used to treat GBM. By integrating methylation and sequencing data with clinical information about sample donors, the TCGA team found that in patients with the inactivated MGMT gene, treatment with temozolomide may cause DNA repair genes to mutate. This disruption leads to the emergence of recurrent tumors that have a very high rate of mutation and may be resistant to chemotherapy treatment.

If follow-up studies confirm that this mechanism leads to recurrent, drug-resistant tumors, first- or second-line treatments for such GBM patients may involve therapies designed to target the disruption of MGMT and DNA repair genes. The new findings also may help clinical researchers figure out the best ways to combine this type of chemotherapy with the next generation of targeted therapeutics.

The results published in Nature today represent the potential for this model of collaborative science to unravel the genetic nature of cancer. “Only by joining forces could the scientists of the TCGA research network come together and make real progress for this devastating illness,” said Meyerson. “Our hope is that this approach will shed light on the other cancers in the pilot phase, and eventually help reveal the genetic secrets behind all cancers.”

The new findings also demonstrate that the use of large-scale genomic technologies by the Broad Institute and TCGA network’s other research centers may lead to biological insights and new therapeutic avenues that were previously intractable.

As the authors noted, the discoveries in the paper are only the tip of an expected iceberg.
TCGA data are made rapidly available to the entire research community, providing researchers and clinicians with an early glimpse of what is hoped will evolve into an unprecedented, comprehensive “atlas” of information describing the genomes of all common cancers.

Adapted from press materials provided by the National Institutes of Health and the Dana-Farber Cancer Institute.