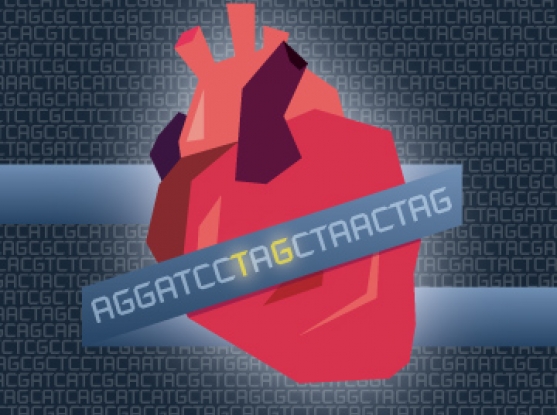 By scouring the DNA of thousands of patients, researchers at the Broad Institute, Massachusetts General Hospital, and their colleagues have discovered four rare gene mutations that not only lower the levels of triglycerides, a type of fat in the blood, but also significantly reduce a person’s risk of coronary heart disease — dropping it by 40 percent. The mutations all cripple the same gene, called APOC3, suggesting a powerful strategy in developing new drugs against heart disease.

By scouring the DNA of thousands of patients, researchers at the Broad Institute, Massachusetts General Hospital, and their colleagues have discovered four rare gene mutations that not only lower the levels of triglycerides, a type of fat in the blood, but also significantly reduce a person’s risk of coronary heart disease — dropping it by 40 percent. The mutations all cripple the same gene, called APOC3, suggesting a powerful strategy in developing new drugs against heart disease. The work, which appears in the June 18 issue of the New England Journal of Medicine, sheds light on the biological role of triglycerides and contributes to a growing body of knowledge that suggests that high triglyceride levels — rather than low HDL, another type of fat in the blood — are a major culprit in heart disease.

“The combination of our genetic results, together with recent clinical trials of drugs that raised HDL levels but failed to prevent heart disease, are turning decades of conventional wisdom on its head,” said senior author Sekar Kathiresan, a Broad associate member and director of preventive cardiology at Massachusetts General Hospital. “HDL and triglycerides are both correlated with heart attack, and have an inverse relationship with one another — the lower the HDL, the higher the triglycerides. It has long been presumed that low HDL is the causal factor in heart disease, and triglycerides are along for the ride. But our genetic data indicate that the true causal factor may not be HDL after all, but triglycerides.”

Coronary artery disease, the most common form of heart disease, is the leading cause of death in the United States and a major cause of death worldwide. Fats circulating in the blood have long been associated with risk of the disease. These fats, or lipids, come in several forms, and include low-density lipoproteins (LDL cholesterol), high-density lipoproteins (HDL cholesterol), and triglycerides.

Two years ago, a large-scale genetic study led by Kathiresan and his colleagues found no causal association between the so-called “good cholesterol,” HDL, and heart disease, challenging the long-held view that increasing HDL levels will lower the risk of heart disease. These genetic studies are consistent with the recent negative results from multiple clinical trials of agents that raised HDL substantially, but failed to lower risk of heart disease.

In the current study, the research team, which also includes senior authors Eric Boerwinkle of the University of Texas Health Science Center at Houston, and Alex Reiner of Fred Hutchinson Cancer Research Center and the University of Washington, set out to assess the role of rare genetic variants through DNA sequencing. Their goal: to pinpoint specific genes that affect both triglyceride levels and disease risk.

The work was conducted as part of the National Heart, Lung, and Blood Institute’s Grand Opportunity Exome Sequencing Project (ESP), which aims to discover novel genes underlying major heart, lung, and blood disorders through exome sequencing — a process in which the portions of the genome that correspond to protein-coding genes, known collectively as the exome, are analyzed through DNA sequencing.

The APOC3 protein is mainly made in the liver and pours out into the blood stream. There, it is thought to prevent the removal of triglyceride-rich lipoproteins from the blood in a few distinct ways, particularly by delaying their clearance following a meal. The mutations uncovered in the NEJM study all decrease APOC3 activity — carriers have roughly half the normal level of APOC3 protein present in their blood. This is thought to lift the damper on triglyceride-rich lipoproteins, allowing them to be cleared more quickly so less enters the blood and the walls of the coronary arteries, where the ultimate damage is done.

One of the APOC3 mutations identified by Kathiresan and his colleagues had been previously found in a 2008 study of heart disease in the Lancaster Amish. That work also uncovered an association with lower blood triglyceride levels. There were hints that the mutation might protect against heart disease — carriers had less calcium in their coronary arteries, a sign of accumulating fat — but more work was needed to understand the connection to clinical disease events such as heart attack.

To definitively establish the relationship between these mutations and the risk of coronary heart disease — specifically, the incidence of heart attack — the researchers analyzed over 110,000 patient samples. They read out, or “genotyped” the relevant parts of the APOC3 gene, and compared heart attack rates in those carrying mutations to those without them.

In the carriers, they found a 40 percent lower risk of coronary heart disease, suggesting inhibition of APOC3 as a new potential strategy for therapeutic development.

“Based on our findings, we predict that lowering triglycerides specifically through inhibition of APOC3 would have a beneficial effect by lowering disease risk,” said senior co-author Alex Reiner, a member of the Public Health Sciences Division at Fred Hutchinson Cancer Research Center and a research professor of epidemiology at the University of Washington’s School of Public Health.

Triglyceride-lowering therapies exist, but those that are currently available have not been proven yet to stave off heart disease. This lack of effect in the studies conducted so far could be due to the therapies’ relatively modest impact on triglyceride levels compared to the sizeable effect of APOC3 mutations, which lower triglyceride levels by 80 to 90 mg/dL. The current therapies likely also act through multiple molecular targets.

Triglyceride-lowering drugs reflect an important clinical need. Doctors have recognized that even after patients are treated with drugs to lower LDL cholesterol, some still succumb to heart attacks. This so-called “residual risk” suggests there are other biological mechanisms at play that can raise a person’s risk of heart disease.

“Although statins remain a powerful arrow in the quiver, the notion of residual risk of coronary heart disease continues to be a significant clinical problem,” said Kathiresan. “Our study really reinvigorates the idea of lowering triglycerides and specifically, by blocking APOC3, as a viable therapeutic strategy for addressing residual risk.”

This work was supported by the National Heart, Lung, and Blood Institute of the U.S. National Institutes of Health. Additional support was provided by several sources. A complete listing can be found in the NEJM paper.