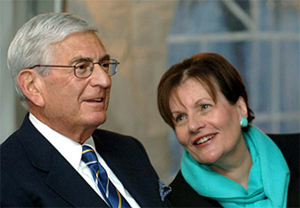 It is often said that two minds are better than one.

So, perhaps it is fitting that the Broad Institute of MIT and Harvard, a collaboration between two of the nation's most prestigious universities, has received a second $100 million gift from Los Angeles-based philanthropists Eli and Edythe Broad.

Launched a short eighteen months ago, the Broad Institute seeks to harness the potential of genomic discoveries to both deepen our understanding of basic biology and to drive medical innovation. Today, the Broads increased their inaugural gift to the Institute — from $100 million to an unprecedented $200 million — which stands as the largest gift of its kind to two universities for a joint research endeavor. It is, in fact, a new kind of philanthropy that promotes strong scientific collaborations across institutions.

"Edye and I have been impressed by the tremendous progress already made by the scientists at the Broad Institute and by the success of this new model for collaborative science involving MIT and Harvard." said Eli Broad, founder and chairman of the Broad Foundations. Speaking to the cadre of scientists at the Broad Institute, he remarked, "We're making this second gift because we believe in you. You've shown us what young people can do when they are allowed to dream, to take risks and to work together."

A renowned faculty forms the scientific cornerstone of the Broad Institute and includes 60 core and associate members who hold positions at either Harvard or MIT. Articulated through a number of programs and initiatives housed at the Institute, Broad researchers work together on a range of endeavors that reach across the corners of biomedical science.

"Eli and Edythe Broad's vote of confidence, expressed through this generous gift, is a tribute to the work of hundreds of young scientists who have come together under this unique collaboration," said Eric Lander, founding director of the Broad Institute. "The Broads' unrestricted support helps a remarkable generation seize the opportunities ahead."

Commenting on the work fostered by the atmosphere at the Institute, Eli Broad said, "This unprecedented partnership between MIT and Harvard University, together with the Harvard Hospitals and the Whitehead Institute, has resulted in a research community that is tackling some of the most important questions in biomedicine."

In the new era of genomic medicine, Broad Institute researchers target fundamental issues, including chemical biology, genome sequencing and analysis, medical and population genetics, cancer, and infectious disease. Infectious diseases, for instance, are among the most ruthless villains to threaten human health worldwide. Developing effective strategies for disease treatment and prevention hinge on a detailed understanding of the culprit pathogens, including the biological machinery and the genetic blueprints that underlie their virulence. In pursuit of this goal, scientists at the Broad Institute have trained their microscopes on the germs that cause malaria and tuberculosis.

Among the founding tenets of the Broad Institute is the development of new tools for genomic medicine that are freely available to the entire scientific community. An example of this commitment was spotlighted by the recent completion of the Haplotype Map, or "HapMap," in which Broad scientists, along with a multinational team, assembled an index of human genetic variability. Future studies will rely on this index to unearth the roots of complex genetic diseases, such as diabetes, heart disease and psychiatric illnesses. Currently, they also head an international effort to produce a comprehensive collection of small, "interfering" RNA molecules (abbreviated "RNAi"), which are targeted against every gene in both the human and mouse genomes. This promises to be an important tool for scientists who hope to understand how genes function, both individually and in multifaceted networks.

William Hahn, an associate member of the Broad Institute and assistant professor of medicine at Harvard Medical School, has played a prominent role in the RNAi Consortium at the Broad. "Work in my laboratory on the Achilles' heels of cancer has flowed directly from collaborations at the Broad Institute," said Hahn, also affiliated with the Dana-Farber Cancer Institute. "The unique energy and organization of the Broad community is accelerating progress in many labs."

While grants from several funding institutions, including the NIH, provide financial support to the Broad Institute, the Broads' gift will enable researchers to embark on bold new undertakings. Through these efforts, scientists hope to use the knowledge gleaned from the human genome to achieve a greater understanding of biology and to develop novel therapies for disease.

"Our gift will allow the Broad Institute to create new capabilities that will allow it to take on important new challenges," said Eli Broad. "We hope others will join us in supporting this unique and powerful venture."

As one step toward facilitating these discoveries, the Broad Institute will soon have a new home. Its current Cambridge residence, 320 Charles Street, will expand to include a new building at 7 Cambridge Center in Kendall Square, which is slated for completion in the spring of 2006.

Basic Q and A about Broad Institute