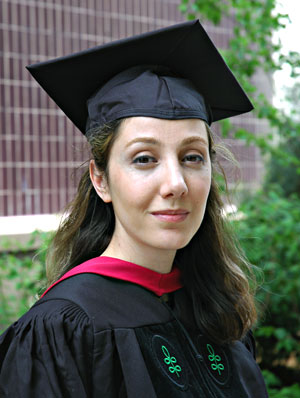 Sabeti, currently a postdoctoral researcher in Broad Institute Director Eric Lander's laboratory, conducted portions of her previous doctoral work here at the Broad. While pursuing her graduate research into the genetic factors that predispose humans to infectious diseases, she herself was bitten by a "bug" of sorts: Sabeti longed to become an infectious disease physician. In particular, she sought to address the medical needs of developing countries, which are often ravaged by communicable diseases, including malaria, tuberculosis, HIV/AIDS and others. Thus, she enrolled in medical school.

The honor conferred by the medical school to its graduates specifically acknowledges accomplishments in scientific research. Eligible students write a thesis describing their work and then defend it in a presentation before an examining committee, comprised of expert faculty and other medical school administrators. The highest honors awarded to Sabeti recognize her efforts to identify and analyze the signatures of natural selection that exist in the human genome.

Natural selection refers to the evolutionary principle that favorable genetic factors, which confer a survival advantage and thus, make it more likely for individuals to reproduce and pass on their genes, typically become more prevalent within a given population over time. This rise in frequency can occur quickly — so quickly that the preferred traits tend to carry many of their chromosomal neighbors along with them. Sabeti developed the analytical tools to detect this genetic phenomenon, providing the practical ability to identify genetic differences among humans that are favored by evolution.

In addition to the rare academic honor from Harvard Medical School, Sabeti has also received a Burroughs Wellcome Fund Career Award in the Biomedical Sciences, which provides $500,000 over a five-year period to support the critical career transition from postdoctoral trainee to junior faculty member. A total of 24 such awards were given to researchers worldwide this year. Since the program’s inception in 1995, the Burroughs Wellcome Fund has awarded more than $100 million in grant funding to early-career scientists, with about 40% of the awards given to physician-scientists like Sabeti.

During her years of postdoctoral research, Sabeti has implemented the methods she developed for detecting natural selection, working with other scientists to pinpoint the likely objects of evolution’s preference throughout the human genome. This has led to the identification of several genes under positive selection, many of which are implicated in human disease. Most recently, she has applied her expertise in the evolutionary ways of the human genome to the genome of another important organism — Plasmodium falciparum, the parasite that causes malaria. This effort, a collaboration among many scientists in Cambridge, Boston, and abroad, is led by Dyann Wirth, a professor at the Harvard School of Public Health and the co-director of the Broad’s Infectious Disease Initiative. It aims to catalogue genetic variation in the P. falciparum genome and to identify regions of natural selection, which may help highlight the genetic vulnerabilities that could be exploited by new drug or vaccine therapies.

Sabeti has also been chosen as one of the 2006 "trailblazers" by Science Spectrum magazine. Each year, the magazine selects several minority science professionals in for the honor, which recognizes outstanding work in science and in the community. Sabeti and the other 2006 Science Spectrum Trailblazers will be honored at a luncheon to be held during the Minorities in Research Science Conference in September.

With assistance from John Barrett and Scott Uva, Harvard University