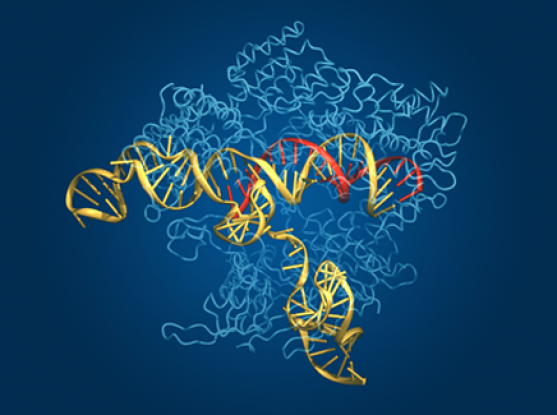 Researchers from the Broad Institute and MIT have teamed up with colleagues from the University of Tokyo to form the first high definition picture of the Cas9 complex – a key part of the CRISPR-Cas system used by scientists as a genome-editing tool to silence genes and probe the biology of cells. Their findings, which are reported this week in Cell, are expected to help researchers refine and further engineer the tool to accelerate genomic research and bring the technology closer to use in the treatment of human genetic disease.

First discovered in bacteria in 1987, CRISPRs (Clustered Regularly Interspaced Short Palindromic Repeats) have recently been harnessed as so-called genome editing tools. These tools allow researchers to home in on “typos” within the three-billion-letter sequence of the human genome, and cut out and even alter the problematic sequence. The Cas9 complex, which includes the CRISPR “cleaving” enzyme Cas9 and an RNA “guide” that leads the enzyme to its DNA target, is key to this process.

“We’ve come to view the Cas9 complex as the ultimate guided missile that we can use to target precise sites in the genome,” said co-senior author Feng Zhang, a core member of the Broad Institute, an investigator at the McGovern Institute for Brain Research, and an assistant professor at MIT. “This study provides a schematic of the entire system – it shows the missile (the Cas9 protein), the programming instructions (the guide RNA) that send it to the right location, and the target DNA. It also reveals the secret of how these pieces function together to make the whole system work.”

To deconstruct this system, Zhang approached the paper’s co-senior author Osamu Nureki at the University of Tokyo. Together, they assembled a team to work out the complicated structure.

“Cas9-based genome editing technologies are proving to be revolutionary in a wide range of life sciences, enabling many new experimental techniques, so my colleagues and I were excited to work with Feng’s lab on this important research,” said first author Hiroshi Nishimasu, an assistant professor of biophysics and biochemistry who works in Nureki’s lab at the University of Tokyo.

The two teams worked closely to reveal the structural details of the Cas9 complex and to test their functional significance. Their efforts revealed a division of labor within the Cas9 complex. The researchers determined that the Cas9 protein consists of two lobes: one lobe is involved in the recognition of the RNA and DNA elements, while the other lobe is responsible for cleaving the target DNA, causing what is known as a “double strand break” that disables the targeted gene. The team also found that key structures on Cas9 interface with the guide RNA, allowing Cas9 to organize itself around the RNA and the target DNA as it prepares to cut the strands.

Identifying the key features of the Cas9 complex should enable researchers to improve the genome-editing tool to better suit their needs.

“Up until now, it has been very difficult to rationally engineer Cas9. Now that we have this structural information, we can take a principled approach to engineering the protein to make it more effective,” said Zhang, who is also a co-founder of Editas Medicine, a company that was started last year to develop Cas9 and other genome editing technologies into a novel class of human therapeutics.

Currently, Cas9 is used in experiments to silence genes in mammalian cells – sometimes at multiple sites across the genome – and large libraries of RNA sequences have been created to guide Cas9 to genes of interest. However, the system can only target specific types of sites. Some studies have also shown that the RNA could lead Cas9 “off-target,” potentially causing unexpected problems within the cellular machinery.

The researchers plan to use this new, detailed picture of the Cas9 complex to address these concerns.

“Understanding this structure may help us engineer around the current limitations of the Cas9 complex,” said study author F. Ann Ran, a graduate student in Zhang’s lab. “In the future, it could allow us to design versions of these editing tools that are more specific to our research needs. We may even be able to alter the type of nucleic acid sequences that Cas9 can target.”

Such technological improvements will be needed if the CRISPR-Cas system is to evolve into a therapeutic tool for the treatment of genetic disease.

The study was supported by the National Institute of Mental Health (NIMH); an NIH Director’s Pioneer Award; the Japan Science and Technology Agency; the Japan Society for the Promotion of Science; the Keck, McKnight, Poitras, Merkin, Vallee, Damon Runyon, Searle Scholars, Klingenstein, and Simons Foundations; as well as Bob Metcalfe and Jane Pauley.

Other researchers who worked on the study include Patrick D. Hsu, Silvana Konermann, Soraya Shehata, Naoshi Dohmae, and Ryuichiro Ishitani.

About the McGovern Institute for Brain Research at MIT
The McGovern Institute for Brain Research at MIT is led by a team of world-renowned neuroscientists committed to meeting two great challenges of modern science: understanding how the brain works and discovering new ways to prevent or treat brain disorders. The McGovern Institute was established in 2000 by Patrick J. McGovern and Lore Harp McGovern, who are committed to improving human welfare, communication and understanding through their support for neuroscience research. The director is Robert Desimone, formerly the head of intramural research at the National Institute of Mental Health.