The Broad Institute of MIT and Harvard proudly welcomes two scientists who will join the institute as core faculty members in 2011: Myriam Heiman, currently a postdoctoral fellow at The Rockefeller University, and Feng Zhang, now a junior fellow at Harvard University. Each scientist has developed and applied unique tools for studying individual cell types in the complex environment of the brain, offering new ways to study the functional implications of genetic variants and cell identity on psychiatric and neurodegenerative conditions. Their ground-breaking approaches will open up new areas of research that align with the work currently being done at the Broad to identify the genetic roots of psychiatric disease. 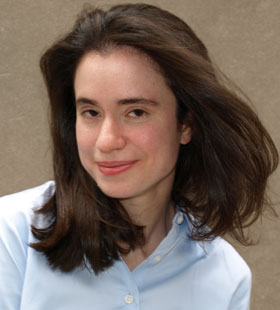 Heiman has been a postdoctoral researcher at The Rockefeller University since 2003. During her academic career, Heiman has worked with increasingly complex organisms, beginning with bacteria during her undergraduate research, then studying yeast as a graduate student and most recently mice as a postdoctoral fellow. After receiving training in classical bacterial genetics at Princeton University, Heiman pursued her PhD at The Johns Hopkins University. There she studied calcium signaling pathways triggered by stressful growth conditions in yeast, a topic that is relevant to the development of new antifungal drugs.

Heiman’s graduate work on cell signaling triggered a desire to study neuroscience. Despite her lack of formal training in the field, she was given the opportunity to pursue postdoctoral research with Paul Greengard at The Rockefeller University, a turn of events she said she looks back on as fortunate, because the interdisciplinary nature of the lab allowed her to carry out work that combined genetics, biochemistry, and cell biology. “Coming from a basic genetic background was very useful,” she said. “I wanted to bring the purity of bacterial and yeast genetics to the mouse, specifically in the nervous system.”

Heiman said she was struck by the longstanding problem of cell identity in the structurally diverse environment of the nervous system. The brain contains many different types of cells that are organized in a complicated way and have unique functions with relevance to disease. “How one studies individual cell types in very complex tissues is a fundamental question that has, for many decades, hampered neuroscience research,” she said.

In collaboration with Nathaniel Heintz at Rockefeller, she and Greengard took a genetic approach to solving this problem. The team attached a molecular handle to ribosomal proteins in a subset of nerve cells. Using the molecular tags, the scientists were able to biochemically purify all the messenger RNA — representing which proteins are being made in the cell — from a single cell type. “It’s a very simple idea, but very powerful because we haven’t had this kind of molecular access before,” she said. “It’s a very exciting new ability to investigate what is being done by particular types of cells at particular times — during normal function and in diseased states.”

After she joins the Broad, Heiman plans to continue this work, applying the approach to neurodegenerative and psychiatric disease, specifically using mouse models of Huntington’s disease, Parkinson’s disease, and schizophrenia. She would like to use the models to determine why certain cell types — and not all cells in the nervous system — are most affected in diseased states, in addition to the functional consequences of genetic variants found to play a potential role in disease. “The Broad offers an ideal place to do these studies because it is without peer in its expertise and leadership in genomic research,” she said.

Heiman will hold joint appointments at the Broad and the Picower Institute for Learning and Memory at MIT. “I’m excited to be part of the Picower Institute because of its wonderful strengths in molecular and cellular neuroscience,” she said. In her role as a core faculty member of the Broad, she will also have strong connections to the Stanley Center for Psychiatric Research at the Broad, which aims to discover genetic risk factors for bipolar disorder and schizophrenia. 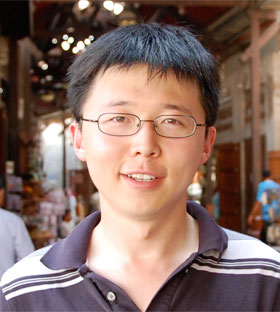 The second new core faculty member is Feng Zhang, currently a postdoctoral researcher in the laboratories of Paola Arlotta at Massachusetts General Hospital and Broad senior associate member George Church at Harvard Medical School. After moving to the United States from China at the age of 11, Zhang fulfilled an early interest in biology by working as a research assistant in a gene therapy lab during high school. He later studied chemistry and physics at Harvard College, where he investigated how viruses enter cells.

As a graduate student at Stanford University, Zhang worked with adviser Karl Deisseroth to develop a new tool for tackling the problem of cellular complexity in the brain. In 2002, a group of researchers discovered a protein in green algae that responds to light by opening or closing a pore in the cell membrane. Deisseroth, Zhang, and their colleagues realized that this protein could allow them to use light to control the activity of neurons.

To develop a tool that altered the activity of individual cell types in the brain of a live organism — a powerful tool for neurological research — the team next created a transgenic system to get only certain cells in an animal’s brain to express the algae protein. By then using fiber optics to deliver light directly to the area of the brain with the cells of interest, the team could control the activity of a target cell type.

This “optogenetic” tool has implications for basic research into the brain’s function and a variety of neurological disorders. “We can systematically look at one type of cell at a time to figure out what each one does, and how they work with each other,” said Zhang. The team has successfully demonstrated the optogenetics tool’s power in studying motor function, sleep, and the reward system. But the major question is how neural activity correlates with behavior. “There are tens of billions of cells in the brain, and at any one moment many cells are firing at different patterns,” said Zhang. “Some are important for perception, some for happiness, some for memory. This tool allows us to begin to answer the question about what those patterns mean, in a real-time way in an animal, using behavior as a readout.”

In his current position as a postdoctoral fellow, Zhang studies the development of the brain. “The way the brain is put together is very important to neurological and psychiatric problems, such as autism or schizophrenia,” he said. “A lot of them involve the way cells are connected in the brain.” With Arlotta and Church, Zhang has been investigating the specific patterns of genes that are turned on or off during development, with the goal of understanding what is altered in disease. “If we can understand the patterns that give rise to necessary cells and what are the crucial genes that malfunction in the process, then we have a target to treat this problem.”

In his new role at the Broad, Zhang plans to pursue methods for perturbing genes and controlling gene expression to understand the role genes play in development of disease. “That’s where my work fits in best here, as a follow-up to genomic efforts,” he said. “We can begin to modify and interact with the genome to see if variants we observe mimic defects in animal models, and if those are necessary and sufficient for disease.”

At the Broad, Zhang will collaborate with members of the Stanley Center. He also will hold a joint appointment at the McGovern Institute for Brain Research at MIT. Zhang is looking forward to joining the community of researchers at the Broad. “I can learn a lot from the diversity of approaches here,” he said. Zhang also values the Broad’s mission of openly sharing data and tools. “When you’re building tools, it’s important to get them out into the community,” he said. “The Broad has this entire system in place for sharing and collaborating, and that’s what I believe in too. You build a tool, send it out, people use it and tell you it’s not working well, and you fix it. That kind of feedback drives things forward.”