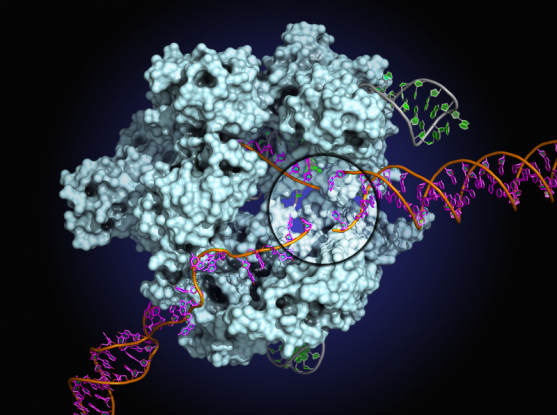 A collaborative study between researchers from the Broad Institute of MIT and Harvard, Massachusetts Institute of Technology, and the National Center for Biotechnology Information of the National Institutes of Health (NIH-NCBI) has identified a highly efficient Cas9 nuclease that overcomes one of the primary challenges to in vivo genome editing. This finding, published today in Nature, is expected to help make the CRISPR toolbox accessible for in vivo experimental and therapeutic applications.

Originally discovered in bacteria, the CRISPR-Cas9 system enables the cutting of DNA as a defense mechanism against viral infection. Although numerous microbial species possess this system, the Cas9 enzyme from Streptococcus pyogenes (SpCas9) was the first to be engineered for altering the DNA of higher organisms, and has since emerged as the basis for a series of highly versatile genome modification technologies.

In order to perturb genes in adult animals, key components of the CRISPR-Cas9 system must be introduced into cells using delivery vehicles known as vectors. Adeno-associated virus (AAV) is considered one of the most promising candidate vectors, as it is not known to cause human disease and has already gained clinical regulatory approval in Europe. However, the small cargo capacity of AAV makes it challenging to package both the SpCas9 enzyme and the other components required for gene editing into a single viral particle.

The Cas9 nuclease from the bacteria Staphylococcus aureus (SaCas9), presented in this new work, is 25% smaller than SpCas9, offering a solution to the AAV packaging problem.

The Broad/MIT team, led by Feng Zhang, core member of the Broad Institute and investigator at the McGovern Institute for Brain Research at MIT, along with collaborators at MIT, led by MIT Institute Professor Phillip Sharp, and the NCBI led by Eugene Koonin, set out to identify smaller Cas9 enzymes that could replicate the efficiency of the current SpCas9 system, while allowing packaging into delivery vehicles such as AAV. The researchers began by using comparative genomics to analyze Cas9s from more than 600 different types of bacteria, selecting six smaller enzymes for further study.

“Sifting through the 600 or so available Cas9 sequences, we identified a group of small variants in which the enzymatic domains were intact whereas the non-enzymatic portion was substantially truncated,” said Eugene Koonin, senior investigator with the NCBI and a contributing author of the study. “Luckily, one of these smaller Cas9 proteins turned out to be suitable for the development of the methodology described in this paper. We are now actively exploring the diversity of Cas9 proteins and their relatives in the hope to find new varieties that could potentially lead to even more powerful tools.”

After rigorous testing, only the Cas9 from S. aureus demonstrated DNA cutting efficiency comparable to that of SpCas9 in mammalian cells. The team then used a method known as BLESS, previously developed by Nicola Crosetto of the Karolinska Institute and Ivan Dikic at the Goethe University Medical School, to determine the presence of unintended “off-targets” across the entire genomic space. Again, SaCas9 and SpCas9 demonstrated comparable DNA targeting accuracy.

The team demonstrated the power of in vivo gene editing with AAV/SaCas9-mediated targeting of PCSK9, a promising drug target. The loss of PCSK9 in humans has been associated with the reduced risk of cardiovascular disease and lower levels of LDL cholesterol. In a mouse model, the team observed almost complete depletion of PCKS9 in the blood one week after administration of AAV/SaCas9 and a 40% decrease in total cholesterol. The mice showed no overt signs of inflammation or immune response.

“While we have chosen a therapeutically relevant target, PCSK9, in this proof-of-principle study, the greater goal here is the development of a versatile and efficient system that expands our ability to edit genomes in vivo,” said Fei Ann Ran, co-first author of the study, along with Le Cong and Winston Yan.

More broadly, SaCas9 is expected improve scientists’ ability to screen for the effects of mutations and better understand gene function using animal models. In the future, it may also be engineered to allow the targeted control of gene expression, which can be employed to expand our understanding of transcriptional and epigenetic regulation in the cell.

The next step, says senior author Feng Zhang, is to compare and contrast the two Cas9s in the hope of recognizing ways to further optimize the system.

“This study highlights the power of using comparative genome analysis to expand the CRISPR-Cas9 toolbox,” said Zhang. “Our long-term goal is to develop CRISPR as a therapeutic platform. This new Cas9 provides a scaffold to expand our Cas9 repertoire, and help us create better models of disease, identify mechanisms, and develop new treatments.”

About the engineered CRISPR-Cas9 system

CRISPRs (Clustered Regularly Interspaced Short Palindromic Repeats) have recently been harnessed as genome editing tools in a wide range of species. The engineered CRISPR-Cas9 system allows researchers to mutate or change the expression of genes in living cells, including those of humans. The family of Cas9 nucleases (also known as Cas5, Csn1, or Csx12) recognizes DNA targets in complex with RNA guides. Researchers can now harness the engineered system to home in on specific nucleic acid sequences and cut the DNA at those precise targets. The cuts modify the activity of the targeted genes, allowing researchers to study the genes' function. For more information about CRISPR-Cas9, go to https://www.broadinstitute.org/what-broad/areas-focus/project-spotlight/crispr.

The Eli and Edythe L. Broad Institute of MIT and Harvard was launched in 2004 to empower this generation of creative scientists to transform medicine. The Broad Institute seeks to describe all the molecular components of life and their connections; discover the molecular basis of major human diseases; develop effective new approaches to diagnostics and therapeutics; and disseminate discoveries, tools, methods and data openly to the entire scientific community.