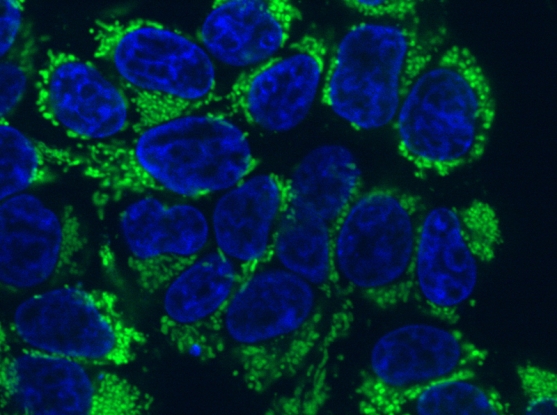 Credit : Tslil Ast
An image of human cells labeled for the frataxin protein (in green), which is insufficient in patients with Friedreich’s Ataxia.
By Leah Eisenstadt

A new research and drug discovery effort at the Broad Institute of MIT and Harvard is taking aim at the rare, inherited movement disorder Friedreich’s ataxia (FA), which causes progressive damage to the nervous system. FA arises from genetic mutations that lead to dysfunction of the cell’s energy-producing organelles called mitochondria. The disorder is the most common mitochondrial disease, and it affects 1 in 50,000 people in the United States. Currently there are no approved treatments.

This new effort, called the Friedreich’s Ataxia Accelerator, is supported by a generous gift from the Friedreich’s Ataxia Research Alliance (FARA), in collaboration with the CureFA Foundation and EndFA, organizations that support research leading to treatments for FA. The Friedreich's Ataxia Accelerator will help build a community of researchers at Broad focused on learning more about the molecular mechanisms underlying FA with the ultimate goal of developing therapeutic strategies for the disorder. 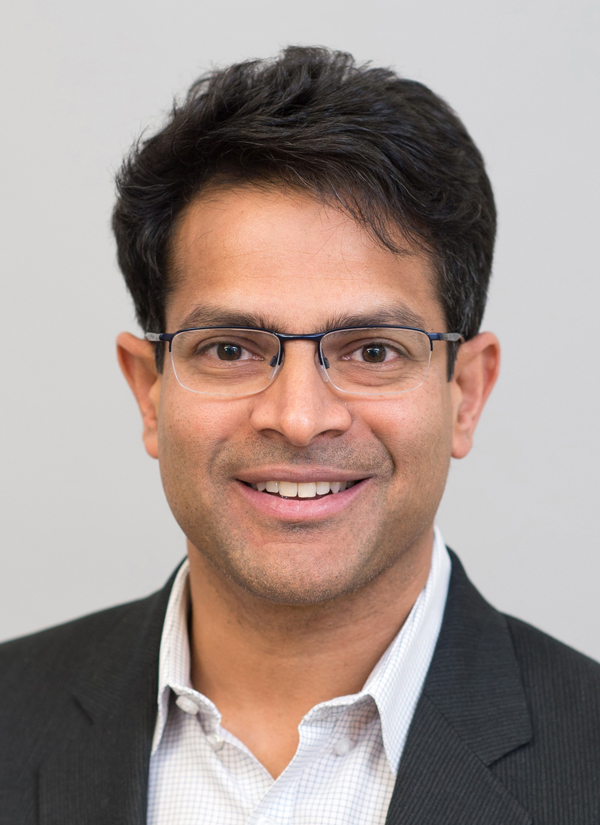 Vamsi Mootha, a Broad institute member and co-director of the Metabolism Program, will lead the effort.

“The goal of the Friedreich's Ataxia Accelerator is to nucleate a small group of investigators who will bring the power of genomics to this debilitating disease,” said Mootha, who is also a Howard Hughes Medical Institute investigator and professor of medicine at Harvard Medical School and Massachusetts General Hospital.

“We believe that building a collaborative community of partners and investing in research are essential for the discovery of treatments for FA," said Jennifer Farmer, CEO of FARA. "We are excited to have the Broad Institute investigators on our team applying novel ideas and technologies and bringing new expertise to the FA research community."

FA is caused by a mutation in the gene that encodes the mitochondrial protein frataxin, which helps synthesize iron-sulfur clusters that are crucial components of cellular and energy-producing machinery. The mutation leads to low levels of this protein, which causes muscle weakness and atrophy, loss of balance and coordination, and other health complications. Onset of symptoms occurs most commonly in children and most need canes, walkers, or wheelchairs by their late teens or early 20s.

In recent work supported by a gift from the CureFA Foundation, the Hamilton family, and the Marriott Foundation, Mootha and collaborators found that limited oxygen in cells, or hypoxia, rejuvenates cells that lack frataxin. Excited by these initial findings in cells, Mootha and colleagues next showed that low oxygen ameliorates ataxia, or poor coordination, when mouse models of FA are housed in low oxygen. The work suggests that hypoxia, or small molecules that mimic its effects, could potentially treat the disorder. Mootha and his group will continue this research with support from the Friedreich's Ataxia Accelerator; they will explore hypoxia and “hypoxia-inspired” regimens in a mouse model of FA that lacks the frataxin protein, and will characterize the physiological effects of those regimens.

“Low oxygen has a huge benefit to these frataxin-deficient cells and mice, but for a human patient, achieving those levels would be like living on a mountaintop in Tibet,” said Mootha. “We’re trying to come up with more practical, safe, and effective ways to harness this totally new biology, think 'hypoxia-in-a-pill'.”

The Friedreich's Ataxia Accelerator will support other work from Mootha, in collaboration with associate member Gary Ruvkun, a professor of genetics at Harvard Medical School and Massachusetts General Hospital, to identify new small molecules or bacteria-derived molecules that rescue frataxin-deficient cells from both humans and C. elegans, the roundworm model organism. In collaboration with the Broad’s Drug Repurposing Hub, the scientists will test thousands of FDA-approved small molecules in cell models, in addition to testing thousands of bacteria in the worm model for their ability to serve as a “probiotic treatment” that can rejuvenate frataxin-deficient worms.

In parallel, the Friedreich's Ataxia Accelerator will directly target the genetic roots of FA through the research from Broad Institute core member David Liu, the Richard Merkin Professor and director of the Merkin Institute of Transformative Technologies in Healthcare at the Broad Institute and professor of chemistry and chemical biology at Harvard University.

The disorder is most often caused by extended repeats of a three-letter section, or triplet, in the genetic code of the frataxin gene. Liu and his lab plan to use genome editing tools to repair the gene, which could restore frataxin protein levels and potentially alleviate symptoms or prevent the disease completely.

“My group is excited to join forces with the Mootha and Ruvkun groups to explore potential new treatments for this devastating genetic disease,” said Liu, who is also a Howard Hughes Medical Institute investigator. “We hope to apply new genome editing technologies, such as base editing and prime editing, to directly correct the genetic causes of Friedreich’s ataxia.”

An important element of the Friedreich's Ataxia Accelerator will support “catalyst” projects that would bring in other researchers at the Broad to explore why, for example, FA manifests in certain cells of the body and not others.

“Out of the many rare mitochondrial diseases, Friedreich’s ataxia is the most common, and we don’t yet have a single FDA-approved treatment for it, or for any of the 300 other rare mitochondrial disorders, for that matter,” said Mootha. “These patients need something new. At the Broad Institute, we’re excited to bring together a community of researchers that will use the newest genomic technologies to advance the understanding and treatment of this disease.”