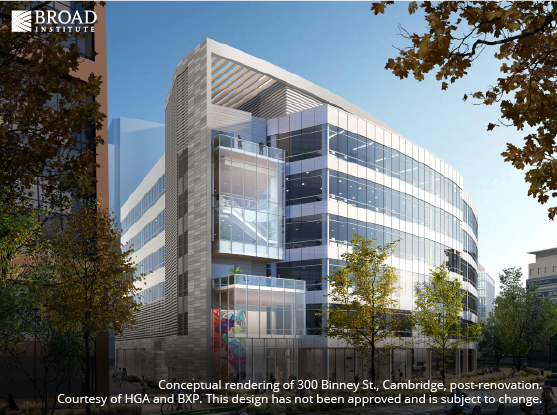 Conceptual rendering of 300 Binney St., Cambridge, post-renovation. Courtesy of HGA and BXP. This design has not been approved and is subject to change.
By Broad Communications

Broad Institute of MIT and Harvard plans to further expand in Kendall Square through the long-term lease of a 225,000 square foot facility at 300 Binney Street in Cambridge. Broad and BXP (NYSE: BXP) plan to convert the existing building into a LEED Gold state-of-the-art biomedical research facility, pending review and approval by relevant agencies.

Once complete in early 2025, the building will increase Broad’s presence in the internationally-recognized innovation district of Kendall Square to nearly one million square feet of lab and office space, allowing Broad to support the continuing growth of its faculty labs, research programs, and technology platforms led by professional scientists.

“Across nearly two decades, Broad Institute has been a space that brings together the most creative scientists of this generation to collaborate and spark new ideas that drive discovery. With this additional space, our scientists will have the flexibility to take advantage of bold new opportunities and continue to work with our hospital and university partners to transform human health,” said Todd Golub, director of the Broad Institute and a founding core institute member. “Alongside our facilities in the Merkin and Stanley Buildings in Kendall Square, this next-generation scientific facility will enable Broad to deepen our commitment to understanding and treating disease.”

According to Golub, Broad’s expansion to 300 Binney Street is part of a long-term facilities plan designed to anticipate future scientific directions, and to ensure Broad has room to “follow the science,” as our understanding of the biology of disease leads toward new therapies.

The Broad Institute convenes a community of researchers from across many disciplines and partner institutions, namely MIT, Harvard University, and Harvard-affiliated hospitals. Broad’s origins are rooted in genomics, and as biomedical research has evolved since 2004, so has the Broad community. Today, the Broad employs more than 2,000 scientists and administrative staff, with more than 3,000 scientists deeply engaged with the Broad Institute through partner institutions.

As Broad begins work on 300 Binney Street, it is also completing a separate construction project: the launch of the public Broad Discovery Center on the ground floor of the Merkin Building at 415 Main Street. Opening in October, 2022, the Discovery Center will be an active, public, educational space that showcases how researchers in Kendall Square and around the world are seeking to understand and treat human disease.