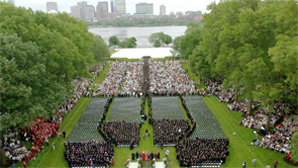 Despite the recent spate of cool, rainy weather, the summer season is, in fact, right around the corner, signaling the end of the academic year. As ceremonies of celebration and commendation mark the occasion, several students affiliated with the Broad Institute have received awards that recognize their research contributions.

Philip Dreyfuss, a Harvard undergraduate who worked in the Broad's Chemical Biology Program, earned the Thomas T. Hoopes Prize for his undergraduate thesis, “Exploring Chemical Diversity through Silyl Functionalized Small Molecules.” It describes his efforts to synthesize new chemical compounds that contain silicon and to develop efficient methods to make these molecules more structurally complex. This research was conducted under the guidance of Annaliese Franz, who is a postdoctoral research fellow in the laboratory of Stuart Schreiber, the director of the Chemical Biology Program. Franz is working to marry silicon-containing motifs with the chemical structures of naturally occurring compounds, in the hope that novel biological probes will emerge from the union.