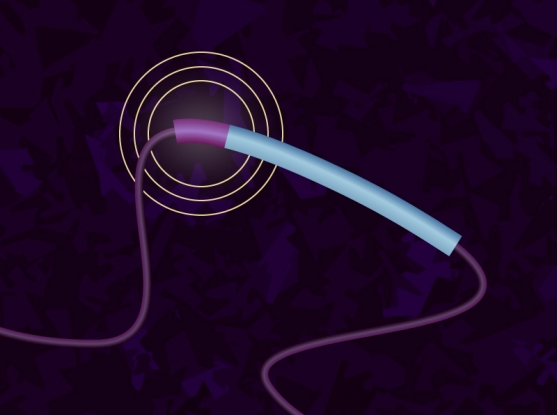 While mutations in protein-coding genes have held the limelight in cancer genomics, those in the noncoding genome (home to the regulatory elements that control gene activity) may  also have powerful roles in driving tumor growth. A new study reveals recurrent mutations in nine such noncoding elements in breast cancer.

Across the landscape of cancer genome studies over the last two decades, the two percent of the genome made up of protein-encoding genes has proven to be fertile ground for researchers. There, scientists have uncovered hundreds of cancer-driving mutations and other alterations that change proteins’ structure and function (or stop their production altogether), fueling development of dozens of targeted treatments across several tumor types.

The other 98 percent of the genome — the noncoding genome, which includes the regulatory regions that controls where and when genes are turned on and off — has been less forthcoming with its secrets in cancer, however. And not for a lack of interest.

“People have anticipated finding noncoding mutations in cancer for a long time,” said Esther Rheinbay, a postdoctoral fellow in the lab of institute member Gad Getz, who leads the Broad Cancer Program’s Cancer Genome Computational Analysis group and is director of bioinformatics at Massachusetts General Hospital's (MGH) Center for Cancer Research (CCR) and Department of Pathology. “There have been many studies over the last several years. But only one recurrent noncoding mutation has been validated for function.”

With a new study in Nature, a large, international collaborative effort including Rheinbay, Getz, and other scientists from the MGH CCR and Dana-Farber Cancer Institute (DFCI), as well as researchers from Mexico, the Slim Initiative in Genomic Medicine for the Americas (SIGMA) and elsewhere, have chalked up a new success, showing that breast cancers hide potentially important mutations in the promoters of at least nine genes. (Promoters are noncoding stretches of DNA just before genes, where the cell’s DNA-reading machinery latches on to start the transcription process.)

In addition to highlighting several genes not previously thought to be involved in breast cancer, the team’s findings offer new insights into how one known cancer gene may help breast tumors thrive in the face of treatment.

Getting around the chemistry

The first solid clue that promoter mutations might be important in cancer came in 2013, when two studies in Science identified mutations in the promoter for the gene TERT in melanoma. (TERT encodes the active portion of telomerase, the enzyme that maintains the telomere caps on the ends of chromosomes). One of those studies, led by institute member and then-DFCI oncologist Levi Garraway (now with Eli Lilly), found TERT promoter mutations in 50 of the 70 melanoma tumors they screened.

“This new finding represents an initial foray into the ‘dark matter’ of the cancer genome,” Garraway said at the time.

Why have subsequent searches not turned up more? Part of the answer is chemistry. Promoters’ DNA is particularly abundant in two bases, guanine (G) and cytosine (C). Such GC-rich regions tend to chemically flummox whole genome sequencing technologies, making it hard to examine promoters at sufficient depth to find mutations with confidence.

The Rheinbay and Getz team came up with a workaround: instead of whole genome sequencing, the team developed a targeted assay designed to capture and deeply sequence genes and the promoters that regulate them. (Promoters and genes have one-to-one relationships; for every gene there is a unique promoter that controls its activity.)

“With this targeted approach,” Getz explained, “we could achieve a far higher level of sequencing coverage in these GC-rich areas.”

Getz, Rheinbay, and their team applied their targeted assay to tumor tissue from 360 breast cancer patients, collected from hospitals in Mexico and Spain and a pair of biobanks. The resulting data revealed a list of nine genes with unusually high numbers of mutations in their promoters: FOXA1, TBC1D12, RMRP/CCDC107, NEAT1, LEPROTL1, ALDOA, ZNF143, CITED2, and CTNNB1.

“Each of these mutations is relatively rare,” Getz said. “But they appear at frequencies on par with individual coding mutations against which targeted treatments have been or are being developed.”

When Getz’s lab at MGH probed the mutated promoters’ functional consequences, they fell into two groups: those that increased their genes’ expression (as was the case for the FOXA1 and RMRP promoters), and those that reduced expression.

Despite the fact that promoters have little DNA compared to genes (meaning there is much less opportunity for mutations to arise in them), six of the promoters harbored mutation hotspots (single sites that were mutated very frequently). Plus, Getz added, “when we accounted for the size of these regions, we found that the promoter mutations had a cancer-driving power akin to that of coding mutations.”

A new route to resistance?

Of the nine-gene list, only one — FOXA1 — is a well-established cancer gene. FOXA1’s protein helps breast cells respond to growth signals triggered by estrogen, and other studies have uncovered coding mutations or duplications in FOXA1 in breast cancer.

Knowing this, Rheinbay, Getz, and his MGH lab team sought to discover how the promoter mutations impact FOXA1. In cell culture experiments, they found that the mutations did indeed ramp FOXA1 expression up. Additionally, cells that overexpressed the gene continued to grow rapidly even when treated with estrogen-blocking drugs.

“By making more FOXA1 available, the promoter mutations may effectively increase the intensity of estrogen signaling, which we know is important to breast cancer,” Getz said. “We didn’t study tumors that resist estrogen-blocking therapies, but these mutations could potentially serve as resistance mechanisms.”

All about the numbers

Rheinbay, Getz and their collaborators’ study expands on an earlier SIGMA-supported survey of protein-coding driver gene mutations in breast cancer, co-led by institute member and DFCI pathologist Matthew Meyerson and Alfredo Hidalgo-Miranda, head of the cancer genomics laboratory at Mexico’s National Institute of Genomic Medicine (INMEGEN). That study, published in Nature in 2012, also revealed mutations in several genes that oncologists had not previously thought of as players in breast cancer.

“I think this work builds on our findings from 2012, and extends the view that somatic promoter mutations are really important in gene activation in cancer,” said Meyerson, who, along with Hidalgo-Miranda, was one of Getz and Rheinbay’s collaborators on the latest study. “With all of the genomic alterations we see in cancer, it comes down to regulation of gene expression. This gives a sense of just how many ways there are to affect that.”

Rheinbay, Getz, and their colleagues suspect that they have only scratched the surface. In the paper, the team wrote that they “have … probably detected only about half of all mutations in promoter regions [in breast cancer].”

“We’ve learned quite a bit about sample numbers, sequencing coverage in promoter regions, and about what we might expect to find in noncoding regions,” Rheinbay said. “These nine were the promoters that we could detect with statistical significance with the sample size we had. There were other promoters with mutations that didn’t hit that level of significance.”

“How many samples do we need in order to find events like these?” Getz asked. “The number is quite large. With the 360 tumors we had, we were just barely able to find these promoter mutations at statistically significant levels. To find the complete landscape of noncoding driver mutations in breast and other cancers, we will need many more samples.