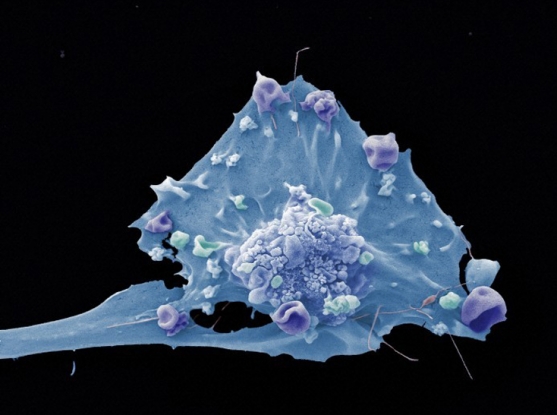 In one of the largest breast cancer sequencing efforts to date, scientists from the Broad Institute, the National Institute of Genomic Medicine in Mexico City, Beth Israel Deaconess Medical Center, and Dana-Farber Cancer Institute have discovered surprising alterations in genes that were not previously associated with breast cancer.

Breast cancer is not a single disease, but a collection of diseases with dozens of different mutations that crop up with varying frequency across different breast cancer subtypes. Deeper exploration of the genetic changes that drive breast cancer is revealing new complexity in the leading cause of cancer death in women worldwide.

In one of the largest breast cancer sequencing efforts to date, scientists from the Broad Institute, the National Institute of Genomic Medicine in Mexico City, Beth Israel Deaconess Medical Center, and Dana-Farber Cancer Institute have discovered surprising alterations in genes that were not previously associated with breast cancer. They report their results in the June 21 issue of Nature, which is publishing a series of papers characterizing the genomic landscape of breast cancer.

One of the team’s new findings, a recurrent fusion of the genes MAGI3 and AKT3 in what is known as a translocation event, was observed in tumors from a rare but aggressive form of breast cancer known as triple-negative breast cancer. This cancer does not respond to conventional hormone therapy because its tumors lack three receptors that fuel most breast cancers: estrogen receptors, progesterone receptors, and human epidermal growth factor receptor 2 (known as HER2). But the biological pathway that is affected by the MAGI3-AKT3 reshuffling is already the target of experimental drugs.

The other new alteration reported by the team occurred in two transcription factor genes. Recurrent mutations were detected in the gene CBFB and deletions of its partner RUNX1. Cancer-causing rearrangements of these two genes are common in blood cancers, such as acute myeloid leukemia, but their discovery in breast cancer marks the first time they have been seen in a solid cancer.

“These genes wouldn’t top the list of genes you think would be mutated in breast cancer,” said Alfredo Hidalgo Miranda, co-senior author of the paper and head of the cancer genomics laboratory at the National Institute of Genomic Medicine, known by its Spanish acronym INMEGEN. “That’s exactly the point of doing this type of analysis. It gives you the opportunity to find those genes that you never thought would be involved in the breast cancer process.”

Their analysis confirmed the presence of previously known mutations, but it also turned up the unsuspected alterations.

“One of the lessons here is the real diversity of mutations in breast cancer. I think it’s clear there are going to be roughly 50 or so different mutated genes in breast cancer,” said Matthew Meyerson, co-senior author of the paper, Broad senior associate member, and professor of pathology at Dana-Farber Cancer Institute and Harvard Medical School. “There’s a big diversity of driver genes in cancer. We don’t understand what all of them are, but larger data sets will enable us to identify them.”

The mutations in CBFB and RUNX1 point to the importance of understanding cell differentiation – how cells become specialized – and transcription factors that regulate that process of cell differentiation in epithelial tissue, which lines the inner and outer surfaces of the body. Further studies are needed to unravel that relationship, the authors concluded.

For the current study, inspecting the novel fusion gene MAGI1-AKT3 more closely showed not only that the translocation can transform normal cells into cancer cells, but also that the protein produced by the gene is insensitive to certain drugs now in clinical trials, yet sensitive to others.

In general, fusion genes are created within the same chromosome or across different chromosomes when parts of one gene join parts of another to become a novel gene that wouldn’t normally exist. Like the CBFB and RUNX1 mutations, translocations are also more common in blood cancers but until now have rarely been detected in solid tumors, especially breast cancer.

This particular MAGI1-AKT3 fusion gene produces a fusion protein that acts in the PI 3-kinase pathway as an oncogene, or a gene that drives cancer, revealing a new target for potential therapy. The kinase pathway controls a multitude of cellular functions. When a gene is mutated in this pathway, the result is uncontrolled cell growth, a hallmark of cancer.

Other gene mutations in this pathway are well-known, but MAGI1-AKT3 is a first.

“This is the first translocation event resulting in an oncogenic fusion protein that has been identified in this pathway,” said Alex Toker, a professor in the department of pathology at Beth Israel Deaconess and Harvard Medical School. “That’s important because this is one of the most frequently mutated pathways in human cancer, especially in women’s cancers such as breast, ovarian, and endometrial cancer.”

The most frequently mutated pathway is also the most studied and, from a pharmaceutical perspective, among the most “druggable.”

In laboratory dishes, tests confirmed that the novel structure of proteins encoded by the fusion gene provided no place for some drugs to bind but offered targets for other drugs.

“There are many additional studies that need to be performed using mouse models of disease that would recapitulate the expression of this protein in the mammary gland, in addition to the mechanism by which this protein promotes the effects associated with malignancy,” Toker said. “These are all experiments that are under way.”

Once the mechanism at work in triple-negative breast cancer is understood through animal models, the next step would be to test chemical compounds to see how effective they might be at targeting cells that harbor this fusion gene’s protein.

Beyond these scientific findings, the study also represents a closer look at the Latino population, thanks to the collaboration between the Broad and INMEGEN forged through the Slim Initiative in Genomic Medicine.

“The Slim Initiative in Genomic Medicine aims to support the discovery of the genetic basis of diseases such as type 2 diabetes mellitus and several types of cancer which have a profound public health impact in Mexico and Latin America,” said Roberto Tapia-Conyer, director general of the Carlos Slim Health Institute. “This novel bi-national scientific collaboration is contributing to put the Latin American genome on the map of the second generation worldwide genome studies.”

INMEGEN scientists had previously built a large breast cancer study and then scientists at both the Broad and INMEGEN exchanged clinical, biological, and computational information.

“From the Mexican point of view, you can say the Latino population has not been extensively characterized using genomic methods,” Hidalgo Miranda said. “This is a significant contribution to the knowledge of the architecture of breast tumors in this particular population.”

The study represented a first opportunity to study the genetic basis of breast cancer in Mexico. Larger studies will be required to determine whether differences in the spectrum of mutations exist between different populations, but this was an important first step toward that goal.

The research was conducted as part of the Slim Initiative in Genomic Medicine, a project funded by the Carlos Slim Health Institute in Mexico. The work was also supported by grants from the National Institutes of Health and the National Cancer Institute.

About the Carlos Slim Health Institute
The Carlos Slim Health Institute is a non-profit organization created in 2007 by the initiative of Mr. Carlos Slim-Helú with the purpose of generating solutions in order to help solving Mexico’s and Latin America’s main public health problems focusing on the most deprived populations.
The institute seeks to achieve its objectives by fostering alliances with Mexican and foreign public, private and social institutions in order to support the adoption of innovative, sustainable and replicable solutions aimed at improving the health of the population, such as the use of mobile technologies in health care, on-line based distance learning, translating scientific research into applicable tools, etc. http://www.salud.carlosslim.org

About the National Institute of Genomic Medicine
The National Institute of Genomic Medicine (INMEGEN) was founded in 2004 and became the 11th National Institute of Health in Mexico. INMEGEN's mission is to contribute to the healthcare of the Mexican population by developing cutting-edge scientific research and well-trained human resources. The goal is to apply the knowledge of genomic medicine through innovation, state-of-the-art technology, and strategic partnerships, all the while complying with universal ethical principles.
INMEGEN's main research areas focus on principal complex diseases in Mexico, all based on the genomic characterization of the Mexican population. Examples of these areas are genomics of metabolic diseases (diabetes mellitus and obesity), cancer research, infectious and cardiovascular diseases, as well as nutrigenomics and pharmacogenomics.
One of the features of INMEGEN¹s innovative culture is scientific research and development of technology, which leads to goods and services that can then be used to contribute to better health care for the Mexican people in the knowledge-based economy.
www.inmegen.gob.mx

About Beth Israel Deaconess Medical Center
Beth Israel Deaconess Medical Center is a patient care, research and teaching affiliate of Harvard Medical School and ranks third in National Institutes of Health funding among independent hospitals nationwide. BIDMC is clinically affiliated with the Joslin Diabetes Center and is a research partner of the Dana-Farber/Harvard Cancer Center. BIDMC is the official hospital of the Boston Red Sox. For more information, visit www.bidmc.harvard.edu.