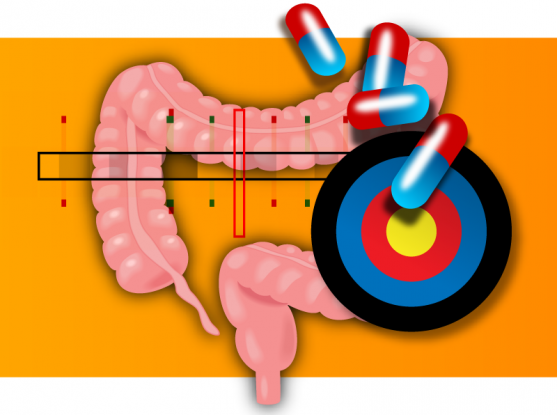 Researchers have found that a genetic mutation that effectively "breaks" the gene RNF186 confers protection against ulcerative colitis, a chronic inflammatory bowel disease.

We often think of the body as a machine, with every part—right down to each single gene—working with optimal efficiency to keep us healthy and disease-free. Take a single bolt out of that machine and something could go wrong—a part ceases to move at the proper speed perhaps, or worse, an entire system fails.

But what if you removed that hypothetical bolt and the “machine” actually worked better? What if missing that one part, for instance, helped the body burn fuel more efficiently, or prevented a glitch that would otherwise cause the machine to fall into disrepair? Were that the case, then perhaps studying that part and its function within the larger machine might reveal more about how the machine works—or might even suggest ways to fix things if the machine broke down.

Scientists have found that something akin to that in human genetics, where research has uncovered a handful of so-called “loss-of-function” (LoF) mutations that appear to help protect individuals from certain diseases. These mutations are slight variations in an individual’s genetic code that essentially “break” a gene, causing the gene to produce an incomplete (or “truncated”) protein that doesn’t function in the body the way it normally would.

In 2006, scientists found that such LoF mutations in the gene PCSK9, which produces a protein involved in cholesterol regulation, were associated with lower LDL cholesterol and a lower risk of heart attack. Subsequently, an LoF mutation in the gene CARD9 was found to confer protection against ulcerative colitis (UC) and Crohn’s disease, two debilitating inflammatory bowel diseases (IBDs). Such findings are promising because they point to a specific part of the genome that may be involved in inhibiting disease, suggesting potential therapeutic targets.

“The hypothesis is that if you inhibit that gene, you will mimic the effect of the mutation, which is to protect the individual from disease. This makes these loss-of-function mutations an attractive lead for drug developers,” explains Manuel Rivas, a computational scientist in the Broad Institute’s Medical and Population Genetics (MPG) Program.

Rivas and others are now conducting searches for other LoF mutations and, this week in Nature Communications, Rivas was first author of a paper that announced the discovery of such a protective mutation specific to UC, a chronic disease of the large intestine that affects roughly 700,000 people in the U.S. alone.

To track down the mutation, Rivas and colleagues, including senior author Mark Daly, who is co-director of Broad’s MPG Program, sequenced genes in regions of the genome that had been previously linked to IBD. Samples that they sequenced came from over 3,000 individuals—some with UC or Crohn’s disease, and others who were healthy controls. The team looked at the sequencing data for evidence of mutations that resulted in “broken” genes that did not produce functional proteins. The search produced a short list of LoF mutations that they then studied more closely, comparing the prevalence of these mutations in IBD sufferers versus healthy individuals.

“The assumption is that if you see many more copies of the LoF mutation in healthy controls compared to individuals who suffer from the disease, then that suggests a protective effect,” Rivas says.

The process led them to a single mutation in RNF186, a gene that’s biological function is just starting to be deciphered. Individuals with UC were unlikely to carry this mutation, while it was much more common in the healthy controls. Since those with the “broken” gene tended not to get UC, the findings suggest that the gene and the protein it produces might somehow play a role in the development of the disease. That makes RNF186 and its protein a promising focus for follow-up studies to determine whether they, or related biological pathways, might make effective targets for therapeutics.

“The nice thing about these protective alleles that disrupt or knockout the function of a gene is they get us closer to understanding the biological role of the gene—what it does in health and disease,” says Daly, who is also founding chief of the Analytic and Translational Genetics Unit at Massachusetts General Hospital and associate professor of medicine at Harvard Medical School. “That’s why there is great enthusiasm for this approach of looking for mutations that break genes; these insights can directly inform the development of new therapies that will have genetic evidence suggesting their safety and efficacy.”

One of the keys to finding such mutations, the researchers say, is access to large collections of genetic samples. Since these LoF mutations may be rare, they may only appear—and so may only be detectable —in large studies. For this study, the researchers benefited from the availability of large sample collections and the willingness of scientists at several institutions and in many countries to share data. Access to the deCODE database turned out to be particularly helpful. deCODE houses and analyzes vast amounts of data from genetic samples taken from Iceland. Since the Icelandic population is relatively isolated, specific rare mutations may be passed on and retained among the people who live on the island, and can therefore appear with greater frequency than in other populations. For instance, the mutation found in RNF186 was four times more common in the population represented in the deCODE data than in other data sets.

“We are incredibly grateful to our colleagues around the globe who were willing to openly share their data. It was that spirit of collaboration that enabled this discovery to be confirmed so rapidly,” Daly says.

Now that the mutation has been identified, the next steps are to explore the function of the RNF186 protein more in depth and to determine what role it may play in UC. The goal is to elucidate the biology underlying the disease enough that drug developers can explore potential treatments that may mimic the effects of the mutation. That path has worked thus far for PCSK9, where the LoF mutation was shown to help protect against heart attack. That discovery has inspired treatments currently in clinical trials.

The researchers are also looking to follow up this study with others seeking LoF mutations.

“For me as a statistical geneticist, I’m interested in taking this approach to a broader set of traits and diseases and integrating many other data types. Focusing on these ‘broken’ genes has proven to be a valuable approach; it helps us efficiently home in on relevant biology,” Rivas says.