An atlas of immune cells gets expanded 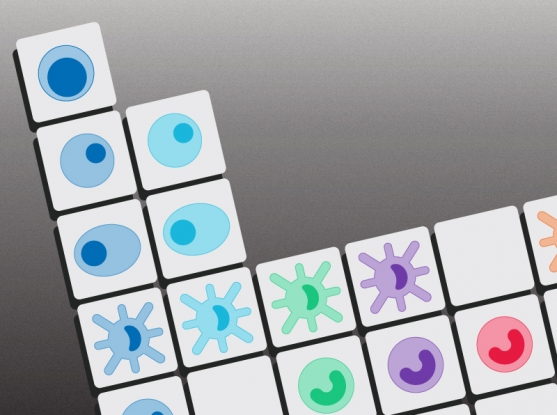 Dendritic cells are important sentinels of the immune system: they sense invading bacteria or viruses and initiate a battle by quickly alerting other immune cells, especially T cells, to fight off the infection. In this role, they impact our health in areas beyond infections, such as autoimmunity, cancer, and vaccines. Research in the field of immunology over the past decade has helped identify a handful of subtypes of dendritic cells and related cells, the monocytes. These subtypes are defined by a limited set of marker proteins that are expressed on the cell surface, that can be probed with antibodies, and that have historically been used to classify immune cells. Because different subtypes can have distinct roles, such as activating T cells to perform different functions, it is important to know them precisely.

Suspecting that the traditional categories of dendritic cells and monocytes overlooked important differences between cells, a team of scientists at the Broad Institute of MIT and Harvard recently took an unbiased survey of this family of cells. “Our goal is to understand how the immune response works in disease, but to do that, we of course need to define the cell types that carry out the immune response,” said Nir Hacohen, co-senior author of the study, co-director of the Broad’s Cell Circuits Program, director of the Massachusetts General Hospital Center for Cancer Immunology, and an associate professor of medicine at Harvard Medical School. “Rather than just assuming we’re defining them correctly based on a lot of historical data, we wanted to go back to the beginning and find the cell types in an unbiased way.”

Using single-cell genomic approaches, the researchers analyzed gene expression patterns of individual human blood cells and performed functional validation to revise the classification of these cells. The work also uncovered dendritic cell progenitors in the blood and a new cell subtype that may have therapeutic implications. Appearing in the April 21 issue of Science, the effort had its roots in a collaboration within the Klarman Cell Observatory, then crystallized into a pilot cell atlas project, funded by the Manton Foundation, that engaged key researchers in other groups and countries, especially the United Kingdom. This study highlights the value of embarking on a comprehensive Human Cell Atlas initiative, which the international community is now taking on, and it offers a useful framework for conducting this kind of analysis on other cell types and tissues.

“We’ve shown that single-cell ‘omics’ approaches can successfully be leveraged to revise the atlas of a family of well-studied cells,” said co-senior author Aviv Regev, also director of the Klarman Cell Observatory and Cell Circuits Program at the Broad, a professor of biology at MIT, and a Howard Hughes Medical Institute investigator. “This and future efforts will shed light on the identity and function of many unique cell types in the human body, which is critical to understanding their roles in health and disease.”

In the new study, the scientists performed single-cell RNA sequencing on roughly 2,400 dendritic cells and monocytes isolated from the blood of healthy people. Single-cell RNA sequencing measures gene activity of individual cells and allows cells to naturally fall into clusters of subtypes based on genome-wide signatures. Using this relatively unbiased method can reveal unrecognized and rare cell types that would be difficult to find using known markers or by making analogies with findings in animal models. 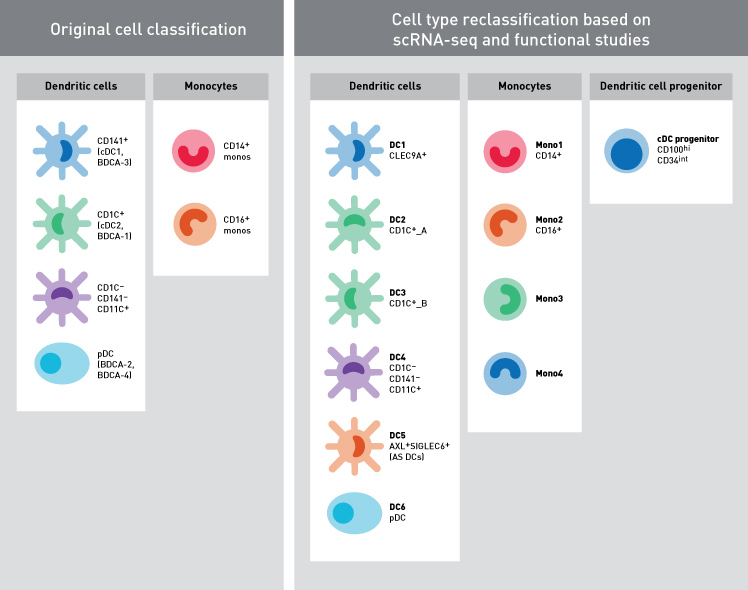 The existing atlas of dendritic cells and monocytes has been expanded to include new subtypes and a dendritic cell progenitor.
Credit: Susanna M. Hamilton, Broad Communications

Interestingly, the results showed that hidden within the cells isolated with the “plasmacytoid” dendritic cell (pDC) subtype is a previously unidentified, very rare cell type dubbed “AS DC” that potently activates T cells. Therapies that use or target plasmacytoid DCs may also be targeting AS DCs (also known as DC5 in the study) inadvertently. Since this study reports that AS DCs are responsible for most of the dendritic cell-like properties of pDCs, the authors suggest that pDCs be re-classified as “natural interferon-producing cells (IPCs),” which was their original designation when pDCs were first discovered in the late 1990’s. Furthermore, future treatments such as vaccines will need to more accurately target the appropriate subtype (pDC or AS DCs) for the intended therapeutic effect.

Another way that the previous taxonomy was expanded was to divide an existing subset of dendritic cells known as CD1C+ cells into two new subgroups, one with high expression of MHC class II genes and the other with high expression of inflammatory genes, but whose respective roles in immunity remain as future questions to address.

In addition, the new study uncovered a dendritic cell progenitor in the blood that, when cultured for one week, gives rise to pure blood dendritic cells. The discovery suggests that this cell type will be useful for generating dendritic cells in the lab more quickly and easily than from bone-marrow-derived progenitors, and that it could hold potential as a therapeutic target to regulate the immune system and fight infections and tumors in the body.

After defining markers for new dendritic cell and monocyte subtypes, the researchers validated their new taxonomy by prospectively isolating cell subtypes in blood (from independent blood donors) using the newly discovered markers and then using RNA sequencing to demonstrate that they captured the intended cells based on the new classification. “When you do genomics discovery, you very often get predictions that need to be validated,” said co-first author Alexandra-Chloé Villani, a postdoctoral researcher in the Hacohen lab. “We decided to complete the full circle and successfully followed the predictions with functional validation that deepened our biological understanding of these newly discovered cell subtypes.” 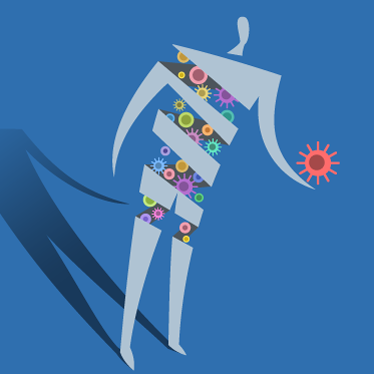 Learning about the body one cell at a time
Credit: Illustration by Steven H. Lee, Studio Graphiko

The more thorough and unbiased classification of immune cells in this expanded atlas should enable more precise studies of cells and function, in health and disease. “Our ability to discover unexpected cellular subsets, even amongst dendritic cells which are some of the rarest cells in the blood, demonstrates the potential of unbiased and ‘bottom-up’ single cell profiling,” said Rahul Satija, co-first author on the study who led the computational analysis of this study as a postdoctoral researcher at the Regev lab at the Broad and with his new lab at the New York Genome Center and New York University.

Clinical and experimental studies can benefit from the improved immune cell taxonomy, allowing researchers to obtain a more uniform sample of cells to study that are functionally relevant. “A precise and thorough atlas of immune cells is essential for the development of new strategies to manipulate host immune response and to improve vaccination and immunotherapeutic strategies,” said co-senior author Muzlifah Haniffa, Wellcome Trust Senior Research Fellow and professor of dermatology and immunology at Newcastle University.

This work demonstrates that mapping the single-cell transcriptomes of a family of cells can be a powerful approach to distinguish subtypes among mixtures of cell types, to reveal rare cell types including those previously hidden among other types, and to shed light on complex relationships between cell types – feats not possible by measuring a limited number of markers. The researchers are next applying the same approach to comprehensively study other cell types across the immune system, including dendritic cells in other tissues of the body, and to look at the role of different cell types in disease states such as autoimmunity, chronic infections, and cancer. They hope that future studies will be as insightful as this one. “Extending our approach using single-cell transcriptomics followed by further functional characterization to define the cellular composition of the human immune system will revolutionize our understanding of health and disease,” said Villani.

From the Broad: International Human Cell Atlas initiative gets underway