Aging cells reorganize their genome structure to defend against cancer 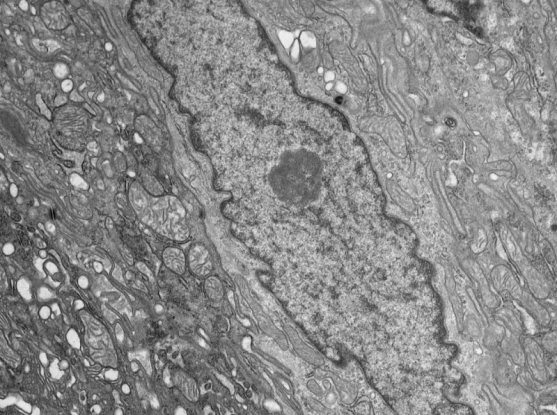 A better understanding of these changes could one day point to new ways to stop cancer.

Scientists at the Broad Institute of MIT and Harvard and Massachusetts General Hospital have revealed previously unknown changes that occur in aging cells. The entire three-dimensional structure of the genetic material in these cells is reorganized over time as they divide, the researchers showed. Surprisingly, they found that these changes help prevent the development of cancer. Cancer cells undergo this reorganization as well, but adapt other mechanisms to overcome the tumor-suppressive effects. The findings, published today in Cell, have potential implications for preventing and treating a wide variety of tumor types.

“The aging process puts up these roadblocks to stop tumors from forming,” said Bradley Bernstein, director of the Broad’s Epigenomics Program, a professor of pathology at Massachusetts General Hospital and Harvard Medical School, and co-senior author of the new paper. “We need to understand how these roadblocks occur, and how tumors get around them.”

“If we can understand this new mechanism by which the body is trying to shut down cancer, we ultimately might be able to co-opt it to exert an even stronger anti-cancer effect with new kinds of therapeutics,” said Martin Aryee, a Broad institute member, an assistant professor of pathology at Massachusetts General Hospital (MGH) and Harvard Medical School, and co-senior author of the new research.

For decades, pathologists have known that tumor cells, under the microscope, look different than other cells. For example, the DNA-containing nucleus of a tumor cell is typically big and misshapen. Researchers suspected that these morphology changes were caused by differences in how the long DNA strands folded up in the nucleus.

In 2015, Bernstein’s research group found that certain changes to the DNA structure — rather than the DNA sequence — could lead to cancer. The researchers wondered whether other DNA structural changes were associated with cancer.

To answer this question in the new work, the team mapped the entire DNA structure in the nuclei of cells from twelve colon tumors and seven normal colon samples. They used a method known as Hi-C to measure how far apart any two pieces of DNA are from each other. They combined billions of such measurements between DNA positions throughout the genome to build a diagram of how DNA is organized in three dimensions.

“This was a massive, unbiased and very systematic look at the genome and we found something completely different than what we were expecting to find,” said Sarah Johnstone, a clinical and research fellow in the Bernstein lab and in MGH’s pathology department, and co-first author of the study along with Alejandro Reyes of the Broad, Dana-Farber Cancer Institute, and Harvard T.H. Chan School of Public Health.

The map revealed important differences in the way DNA is structured in the cancer cells. The human genome, which stretches six feet long, is normally packaged into the nucleus in an organized and fairly predictable way; the genes most often used by cells are found in an inner, active layer, while rarely-used genes are tucked away into an outer layer of DNA. But in the colon cancer cells, this organization was lost. Non-cancerous cells that had divided many dozens of times also had disorganized genome structures. The disorganization seemed to increase with aging, the group showed.

The researchers had originally expected that these DNA structure changes would promote cancer. But surprisingly, the reorganization appeared to reduce a person’s chance of getting cancer.

According to the new work, the changes in DNA structure modulated the activity of individual genes. Genes required for wound healing, stem cell proliferation and regeneration—pathways commonly co-opted by cancers—were turned down. At the same time, genes associated with an immune response to tumors were activated. These findings could explain how the genome reorganization in aging cells helps prevent the development of cancer.

“We think this is an overarching mechanism that prevents tumors, but it could have so many other impacts,” said Bernstein. “It could contribute to less desirable consequences of aging like slowed wound-healing and inflammation.”

The team next studied a broader sample of data from ten different tumor types, and found similar changes in other tumors and tissues.

Bernstein points out that aging cells are still accumulating mutations, so even though they are strengthening their anti-cancer defenses, they can still acquire mutations that allow them to overcome checks and grow uncontrollably.

The researchers still have many questions to address, such as how universal the DNA structure changes are in aging and cancer, how cancer cells overcome the barriers posed by these changes, and whether these barriers can be reinstated with a new kind of cancer therapy.

The team says answers to these questions could help prevent and treat cancer in novel ways.

Support for the study was provided by the National Cancer Institute and the Starr Cancer Consortium.