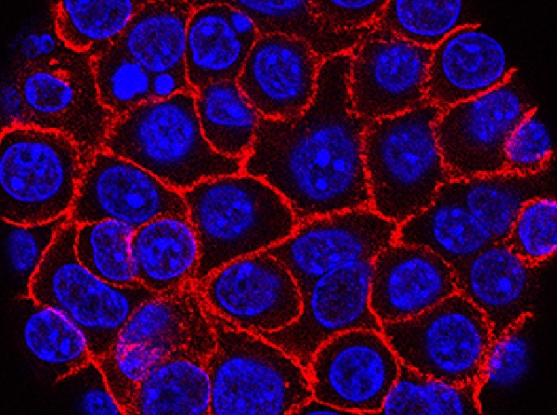 What: Researchers have uncovered a novel biological pathway that may be driving up to a third of pancreatic cancers. The pathway, which could potentially be a target for therapeutics, represents a much-needed lead in the development of treatments for one of the most lethal forms of cancer. While pancreatic cancer is the fourth leading cause of cancer death in the U.S., resulting in over 40,000 deaths annually, there has been a dearth of new treatment options—and regularly administered chemotherapy is not effective.

Encouraged by data from The Cancer Genome Atlas (TCGA), which catalogs large-scale genome sequencing studies of various cancer tumor types, researchers from the Broad Institute of MIT and Harvard, Massachusetts General Hospital (MGH), and Harvard Medical School (HMS) looked closely at a protein called SIRT6, which appeared to be associated with pancreatic cancer. SIRT6 is known to affect how DNA is packaged within each cell in a structure called chromatin. Since the way in which DNA is packaged can affect how our genetic blueprint is read and turned into proteins (which conduct the work of the cell), the researchers were interested to see how SIRT6 might be influencing protein activity—and potentially contributing to cancer development—in the pancreas.

“The TCGA data suggested that there was a loss of SIRT6 in these pancreatic tumors, so we wanted to create the correct models and look to see if perhaps SIRT6 might be acting as a tumor suppressor in pancreatic tissues,” says the study’s senior author, Raul Mostoslavsky, an associate member at Broad and an associate professor of medicine at HMS and MGH. “Those models told us that, indeed, SIRT6 was acting as a tumor suppressor; without it, tumors developed much faster in the pancreas and spread much more aggressively to other tissues, including the lung.”

Mostoslavsky’s group then followed the biology downstream to try to determine what physiological consequences the loss of SIRT6 might be triggering, resulting in aggressive pancreatic cancer. They teamed with Alon Goren at the Broad Technology Labs (BTL), and employed a method called ChIP-seq (Chromatin Immunoprecipitation followed by deep genome sequencing) to study what effect lacking SIRT6 might have on the molecular regulation of other genes in their cancer cell lines. They found that, without SIRT6, the regulation of a protein known as Lin28b—a protein usually only produced during embryonic development but also active in some cancers—was aberrant; it became active, leading to tumor growth. Follow-up work in mice confirmed the role of Lin28 in pancreatic cancer cell proliferation. The findings suggest that SIRT6 serves as a tumor suppressor in the pancreas by controlling production of Lin28b.

The team then looked at pancreatic tumor samples from cancer patients to see how many cases exhibited this low SIRT6/high Lin28b signature, finding it in roughly a third of those samples.

“While Lin28b has been linked to other tumors before, it has never been shown to be a driver of pancreatic cancer,” Mostoslavsky says. “This novel pathway is a promising target for potential therapeutics that could help a significant fraction of patients suffering from this terrible disease.”

Who: Mostoslavsky led the study along with first author Sita Kugel, a postdoctoral researcher at Mostoslavsky’s lab at MGH and HMS. They teamed with colleagues, including Goren and others at BTL, to conduct the series of experiments that went into this work. BTL is a multidisciplinary group dedicated to creating, improving, and standardizing key research processes in biomedicine. Their automated pipelines provide expert support for researchers across biological disciplines, in this case joining the Mostoslavsky’s group to conduct the ChIP-seq analyses.

"Our highly productive collaboration with Dr. Goren and BTL enabled us to identify Lin28b as a critical target for SIRT6 in pancreatic cancer. The findings were unexpected. It was striking that the loss of a chromatin factor could give pancreatic cancer cells the plasticity to hijack an embryonic program to drive tumor growth,” Kugel said.

Why: Given the lethality of pancreatic cancer and lack of effective treatments, researchers are vigorously looking for biological leads that might suggest effective drug targets and result in effective treatments. Genetic associations—genes that have been shown statistically to have a connection to a given disease—have proven to be a helpful starting point in the search for what drives particular types of cancer. However, these associations are typically far more complicated than simple cause-and-effect.

One complication is that genes and the proteins they produce often play different roles in different cell types, depending on how they are expressed—whether they’re active in a specific cell type and to what degree. This makes it all the more important that researchers look not only at the original gene or protein of interest, but at the entire pathway they affect. Such was the case with SIRT6: the Mostoslavsky Lab and Goren’s team at BTL had previously collaborated to examine the role of SIRT6 in colon cancer. In that case, SIRT6 acted as a tumor suppressor by inhibiting a metabolic pathway in the cancer cells. In pancreatic cancer tumors, SIRT6 performs a very different role, acting as a tumor suppressor by inhibiting expression of Lin28b, an RNA-binding protein usually only expressed during embryonic development.

“One of the great things about working with Raul is that his team follows the biology, step-by-step, to understand what is happening in a pathway to elucidate the entire cancer-driving mechanism,” says Goren, who leads the epigenomics group at BTL. “This work shows how the entire path of chromatin regulation becomes aberrant because of the absence of SIRT6. It shows that one step is not trivial; it affects a whole cascade that leads to cancer.”

Where to find it: The study was published online May 12 in Cell.