What our gut tells us about the ‘hygiene hypothesis’ 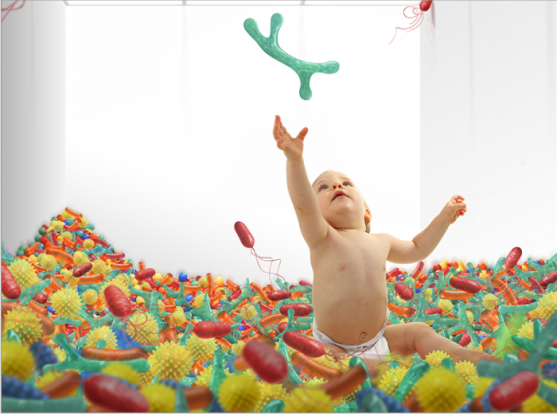 Over the past few decades, the healthcare community has observed an intriguing phenomenon: diseases related to the immune system—type 1 diabetes (T1D) and other autoimmune diseases, allergies, and the like—have taken hold in countries that have thriving, modern economies, while barely making a mark in the developing world. One of the best-supported theories to explain this peculiar public health pattern has been dubbed the “hygiene hypothesis.” The theory is based on the premise that exposure to pathogens early in life is actually beneficial to the education and development of the human immune system and that the sanitary conditions in “westernized” countries ironically hamper our natural immunity.

“If you look across the world geographically where incidence of autoimmune disease and allergies are high (and it’s mostly in the western world—America and Europe, etc.) and then superimpose a map that shows where diarrheal diseases and bacterial infections occur, you’ll see very little overlap. That suggests that exposure to bacteria and other ‘bugs’ may play a pivotal role in the immune system, and that we might be able to understand what that role is by studying the human microbiome,” says Aleksandar Kostic, a postdoctoral fellow in the lab of Ramnik Xavier at the Broad Institute of MIT and Harvard and co-first author of a new paper that appears this week in Cell.

The work, which was funded by JDRF, is the product of an extensive collaboration involving researchers at Broad, University of Helsinki and Aalto University in Finland, the Novartis Institute of Biomedical Research, and other organizations across the globe working together as part of the DIABIMMUNE Study Group. By looking at the gut microbiomes of infants from three different countries, the team uncovered evidence that not only supports the hygiene hypothesis, but also points to interactions among bacterial species that may account, at least in part, for the spike in immune disorders seen in western societies.

The border of Finland and Russian Karelia separates two starkly contrasting economies, with a sevenfold difference in gross national product existing between “westernized” Finland and the more traditional, agrarian Russian Karelia. Nearby, just across the Gulf of Finland, sits Estonia, a country that has seen rapid economic growth and increased standard of living since the dissolution of the Soviet Union over twenty years ago.

Consistent with the hygiene hypothesis, the prevalence of T1D is six times lower in Russian Karelia than in Finland, even though there is little difference between the two populations in the frequency of the genetic risk factors that predispose individuals to, or protect them from, the disease. Estonia, meanwhile, has seen incidences of autoimmune disease increase in a linear fashion as its economy has improved over the past two decades.

The DIABIMMUNE Study Group saw in these three countries the perfect “living laboratory,” where genetics, climate, and the make-up of the community were relatively consistent, but the economic structure and standard of living were key variables. Over several years, the group recruited and began collecting monthly stool samples from infants in each of the three countries. Along with the samples, from which they would identify and quantify the bacteria that made up the infants’ gut microbiomes, they also collected lab tests and questionnaires about such topics as breastfeeding, diet, allergies, infections, and family history. They evaluated all of this data, which was collected from over 200 infants from one month after birth to age three, to see whether connections might exist between disease incidence and what they found in the microbiome.

“We can only speculate why this difference in bacterial populations exists; what we could show was what implications that difference in populations might have,” says Tommi Vatanen, a graduate student at the Broad and University of Aalto and co-first author of the Cell study. To do that, the Broad research team worked with researchers from Novartis, including co-first author Eva d’Hennezel and co-senior author Thomas Cullen, to compare and contrast the genes of the bacterial species they’d found.

“That led us to the lipopolysaccharides,” Vatanen says.

Not your father’s LPS

Lipopolysaccharides (LPS) are large molecules embedded in the outer membrane of certain types of bacteria, and are known to elicit an immune response in animals. In fact, LPS is so well-known for its ability to trigger the immune system that LPS from the bacteria E. coli is commonly used to stimulate immune cells in laboratory experiments. But, it turns out, not all LPS are created equal.

“We believe that E. coli, which lives in the infant gut in all three countries, might be one of the immune educating bacteria responsible for training the immune system early in life. But, we found that if you mix Bacteroides with E. coli it can actually inhibit the immune-activating properties of E. Coli, and we suspect this might have consequences on the development of the immune system,” Vatanen explains.

“In the Finnish and Estonian infants, where Bacteroides dominates, the gut microbiome is immunologically very silent,” Kostic adds. “We believe that, later on, this makes them more prone to strong inflammatory stimuli.”

The researchers suspect that the LPS immune activation by E. coli (a common bacteria found in the human gut, not to be confused with the more serious strain known to cause food poisoning) seen in the Russian Karelian infants is reflective of the relationship humans developed with microbiota over the course of human evolution. The prevalence and dominance of Bacteroides, in contrast, is a more recent phenomenon related in some way to improved sanitation and standard of living.

Xavier, who is the corresponding author of the study, says that the LPS finding begins to explain mechanistically how differences in lifestyle brought on by economic disparities may be contributing to the rise of immune-related disease, as the hygiene hypothesis suggests.

“Our study underscores that the microbiome plays an important role in immune education, and when immune education goes wrong, individuals are set up for autoimmune disease,” says Xavier, who in addition to being an institute member of the Broad is also chief of gastroenterology at Massachusetts General Hospital, Kurt Isselbacher Professor of Medicine at Harvard Medical School, and co-director of MIT’s Center for Microbiome Informatics and Therapeutics. He notes that, by highlighting important principles about the relationship between healthy immune system development and exposure to pathogens – whether through skin-contact with unsanitized surfaces or through the air due to proximity to pets or farm animals – the findings may spur reflection about how humans interact with their environment.

The researchers say that they would next like to investigate how and why Bacteroides has come to dominate in the infant gut in these westernized countries. They also plan to expand their studies to include other geographic regions and hope to uncover additional mechanisms that help explain the connection between the microbiome and immune-related disease.