Illuminating the broad spectrum of disease 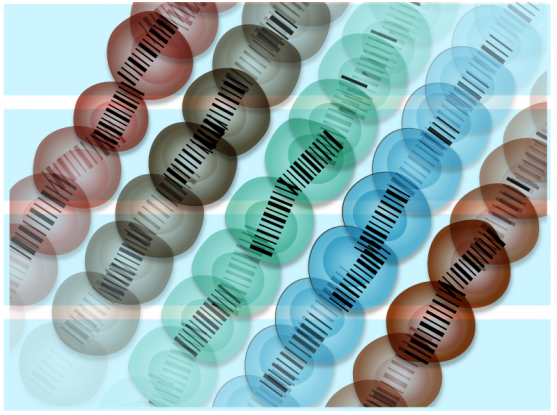 In a paper published in Nature Biotechnology, researchers from the Broad Institute of MIT and Harvard and the Dana-Farber Cancer Institute describe a new method that dramatically simplifies an arduous experimental process in early drug discovery. Their method, called PRISM, uses a molecular barcoding system to test potential drug compounds on cancer and other cell lines at an unprecedented scale and speed. The system allows for pooling and testing of multiple cell lines simultaneously, and promises to accelerate the search for targeted therapies by better representing the broad genetic diversity of disease.

“Before, you could in principle test chemical compounds of interest against hundreds of cell lines, but it would require a lab member going to a freezer, taking out hundreds of vials—one for each cell line—and setting up hundreds of tissue culture plates. Then, every time you wanted to modify the compound a little and test it again across cell lines, it would mean going back to the freezer,” explains Todd Golub, chief scientific officer at the Broad and senior author of the paper. “PRISM makes it far less cumbersome to get the data you need from a panel of cell lines.”

PRISM involves the introduction of trackable “barcodes” that are integrated into the genetic makeup of each cell line being studied. The barcodes are 24 DNA nucleotides in length. With four different nucleotides comprising our genetic code (adenine, guanine, cytosine, and thymine), the barcodes are long enough to be distinct from other stretches of DNA in the genome, and also allow for the generation of a seemingly limitless number of codes.

Once the barcodes have been introduced into individual cell lines, multiple lines can be mixed together as a “pool” that can then be exposed to a chemical compound. At the end of the experiment, counting the numbers of each barcode serves as a readout that reveals how many cells from each cell line survived exposure to the compound.

PRISM’s pooling potential helps address a persistent problem in cancer research: how to efficiently test potential drugs in a way that reflects the genetic diversity of a disease like cancer. Tumors are notoriously heterogeneous—the product of genetic mutations that may be common in a particular type of cancer, or exceedingly rare. PRISM allows researchers to test a chemical compound against tens or hundreds of cell lines, each containing distinct mutations, all in one go.

“One of the perennial challenges in cancer research has been finding an approach to drug discovery that is both complex enough to represent cancer, but simple enough to enable studies at higher scale than has been feasible in the lab,” says first author Channing Yu, a medical oncologist and postdoctoral researcher in Golub’s lab at Dana-Farber and the Broad. “We created the PRISM method specifically to address this problem.”

Understanding which cancer cell lines (and, by extension, which mutations) might respond to a specific compound or drug has profound implications for targeted therapy. Targeting each patient’s particular form of cancer is a goal of an increasingly popular clinical model called “precision medicine,” which aims to tailor treatment for each patient. At the heart of precision medicine is the recognition that, if the biology underlying a condition varies among patients, the response the therapeutics, too, will vary.

“In the area of oncology, but even more generally, embracing the genetic diversity of disease is really important,” says Golub, who is also director of the Broad’s Cancer Program, the Charles A. Dana Investigator in Human Cancer Genetics at Dana-Farber, professor of pediatrics at Harvard Medical School, and a Howard Hughes Medical Institute investigator. “There is real power in being able to understand how potential drugs work in the context of the molecular diversity of the disease. PRISM lowers the barrier to studying this genetic complexity; it offers a wider lens with which to view and understand the activity of a compound across cancer types.”

The expansion of genetic diversity in the earliest phases of drug discovery may permit the identification of new cancer targets. The researchers note that PRISM makes it easier to profile a broad range of cancers—not only rare cancers but also cancers from populations whose genetics are traditionally underrepresented in research studies.

The customizable design of the PRISM method also permits its implementation in different settings. The method can be adapted for use in large genome centers or small academic laboratories. It can be used to study a particular chemical compound of interest in great depth, or in a broader screen at the starting point of a drug discovery effort. The number of cell lines can also vary depending on the experiment being implemented; one could test a handful of cell lines, or hundreds of them.

“This method is modular and can be used in many different types of experiments. Whether the scale of the experiment is very small or extremely large, PRISM offers the potential to simplify it and make it more feasible,” says Yu, who is also an instructor in medicine at Harvard Medical School..

Golub’s team used a barcode readout system, which had been “battle-tested” in work with DNA, RNA, and proteins previously, as a basis for the method. In a discovery screen profiling 102 cell lines against 8,400 compounds, PRISM led the researchers to a specific novel compound, BRD-7880; the specific action against cell lines in the panel rapidly led them to discover that this compound worked by inhibiting aurora kinase B, an enzyme involved in cell division that is abnormally regulated in several cancers. The system enabled the team to read up to 500 barcodes at once, but the researchers say batch sizes can vary. Additionally, barcodes could be read out using next-generation genome sequencing techniques.

Beyond the expansion of the collection of barcoded cell lines for testing larger panels of compounds, next steps will include determining whether PRISM can be used to study the complex interactions between different cell types found within tumors, or to study tumor evolution during cancer development or after cancer treatment.